Can facemasks help reduce the negative health impacts of air pollution? However, because time is required to implement policies intended to improve air quality and for them to actually have an effect, a growing number of pedestrians and bicyclists are choosing to wear masks or other devices that claim to reduce the risks. 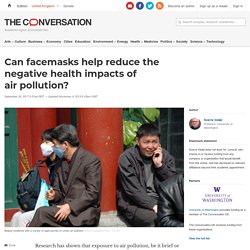 Options range from simple paper dust masks to those that supply clean air and prevent exposure to even the worst air pollution, like that found in dangerous work settings. Masks that are appropriate for outdoor use lie somewhere between these two extremes. Risks and risk reduction Air pollution is made up of particles and gases. Gases include ozone, carbon monoxide, nitrogen dioxide, sulfur dioxide and a large group of chemicals known as volatile organic compounds (VOCs). So are facemasks effective in reducing or preventing air pollution exposure? Simple paper dust masks are largely useless when it comes to lessening air pollution exposure. What does the research say? Considerations and limitations. Scott Morrison's biggest failure in the bushfire crisis: an inability to deliver collective action. With the mega-fires consuming enormous tracts of country Australia, we are witnessing not only a national disaster, but also a failure of national leadership. 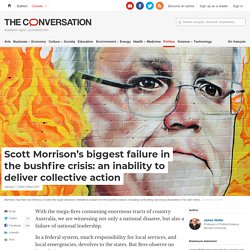 In a federal system, much responsibility for local services, and local emergencies, devolves to the states. But fires observe no boundaries. It is a situation that was foreseen by experienced fire chiefs last April. Indeed, fire chiefs had made a case for more federal resources two years ago. But their calls for national leadership and national coordination were ignored. Now that what they feared has come to pass, Prime Minister Scott Morrison and his team have handled matters poorly. As a result, commentators have weighed in on Morrison’s lack of political authority, judgement and feel for public opinion – and whether the “miracle man” of the 2019 election can regain his footing. How Morrison compares to other leaders Consider other examples of how leaders have reacted to similar situations.

A failure of collective action. Climate change: a climate scientist answers questions from teenagers. Pupils in 60 countries go on strike from school on March 15, 2019, to demand urgent action from the world’s leaders on climate change. 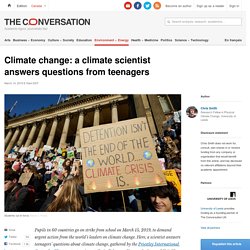 Here, a scientist answers teenagers’ questions about climate change, gathered by the Priestley International Centre for Climate at a previous strike in February. You can find more Q&As like this on the centre’s website. If you’re a teen, you can have your questions about the world answered by academic experts – find out how at the end of this article. How long is the planet going to last? I heard it was 12 years… The “12 years” date you’ve heard comes from a special report requested by the United Nations, which looks at the impacts of global warming at 1.5°C above pre-industrial levels. To avoid global warming above 1.5°C, humanity needs to cut its carbon dioxide (CO₂) emissions to about half of today’s levels by 2030, and to zero by 2050. Missing the 2030 deadline would make it very difficult to keep global warming under 1.5°C. Fly less. Culture - How science fiction helps readers understand climate change. It’s the year 2140 and two kids ride their skimboards in the heart of Manhattan, near the point where Sixth Avenue meets Broadway. 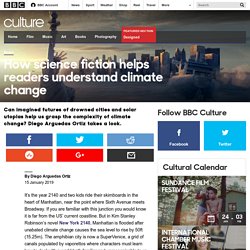 If you are familiar with this junction you would know it is far from the US’ current coastline. But in Kim Stanley Robinson’s novel New York 2140, Manhattan is flooded after unabated climate change causes the sea level to rise by 50ft (15.25m). The amphibian city is now a SuperVenice, a grid of canals populated by vaporettos where characters must learn how to deal with a world both familiar and unrecognisable to us. Mid-Manhattan skimboading is all too possible in this future.

Are our cities effectively planning for climate change?