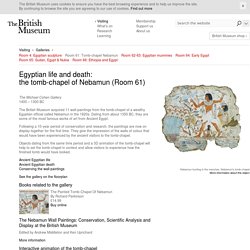 Dating from about 1350 BC, they are some of the most famous works of art from Ancient Egypt. Following a 10-year period of conservation and research, the paintings are now on display together for the first time. They give the impression of the walls of colour that would have been experienced by the ancient visitors to the tomb-chapel. EGYPTIAN SOCIAL PYRAMID.