20 Things You Didn't Know About Pop Art. The advent of the Pop Art movement in the 50’s didn’t just impress the wealthy; it changed the culture. 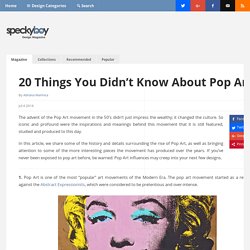 So iconic and profound were the inspirations and meanings behind this movement that it is still featured, studied and produced to this day. In this article, we share some of the history and details surrounding the rise of Pop Art, as well as bringing attention to some of the more interesting pieces the movement has produced over the years. If you’ve never been exposed to pop art before, be warned: Pop Art influences may creep into your next few designs. 1. Pop Art is one of the most “popular” art movements of the Modern Era. Gold Marilyn Monroe (1962) 2.

The Beginning of the Pop Art Movement 3. 4. Viki (1964) – Roy Lichtenstein More than that, he included actresses like Brigitte Bardot in his works, similar to the way Andy Warhol used Marilyn Monroe as a model. British Pop Art vs. 6. On the other hand, Andy Warhol’s motto was “I think everybody should be a machine.” 7. 8. 9. 10. 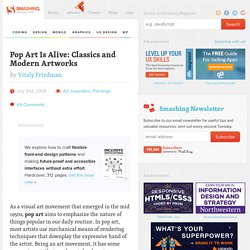 Hardcover, 312 pages. Get the book now → The Andy Warhol Foundation for the Visual Arts - Andy Warhol Biography. More than twenty years after his death, Andy Warhol remains one of the most influential figures in contemporary art and culture. 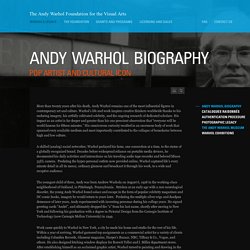 Warhol’s life and work inspires creative thinkers worldwide thanks to his enduring imagery, his artfully cultivated celebrity, and the ongoing research of dedicated scholars. His impact as an artist is far deeper and greater than his one prescient observation that “everyone will be world famous for fifteen minutes.” His omnivorous curiosity resulted in an enormous body of work that spanned every available medium and most importantly contributed to the collapse of boundaries between high and low culture.

A skilled (analog) social networker, Warhol parlayed his fame, one connection at a time, to the status of a globally recognized brand. Decades before widespread reliance on portable media devices, he documented his daily activities and interactions on his traveling audio tape recorder and beloved Minox 35EL camera. Famous Pop Artists. Pop Art Movement, Artists and Major Works. "Pop is everything art hasn't been for the last two decades. 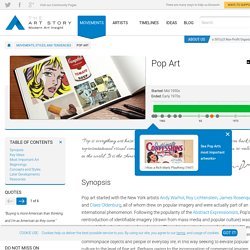 It's basically a U-turn back to a representational visual communication, moving at a break-away speed...Pop is a re-enlistment in the world...It is the American Dream, optimistic, generous and naïve. " Synopsis. Pop Art. Postwar Context In the years following World War II, America enjoyed an unprecedented period of economic and political growth. 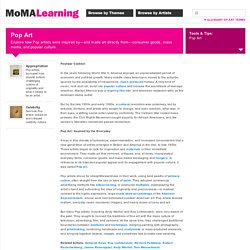 Many middle class Americans moved to the suburbs, spurred by the availability of inexpensive, homes. A new kind of music, rock and roll, burst into and became the soundtrack of teenage rebellion. Marilyn Monroe was a reigning star, and television replaced radio as the dominant media outlet. But by the late 1950s and early 1960s, a revolution was underway, led by activists, thinkers, and artists who sought to change, and even overturn, what was, in their eyes, a stifling social order ruled by conformity. Pop Art: Inspired by the Everyday It was in this climate of turbulence, experimentation, and increased consumerism that a new generation of artists emerged in Britain and America in the mid- to late-1950s.

Museum. Pop Art Portrait Lessons. Introduction to Pop Art. Andy Warhol's Soup Cans: Why Is This Art? NGAkids Brushster. BRUSHSTER is an abstract painting machine for kids of all ages. 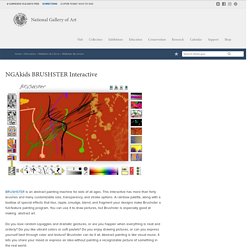 This interactive has more than forty brushes and many customizable size, transparency, and stroke options. A rainbow palette, along with a toolbox of special effects that blur, ripple, smudge, blend, and fragment your designs make Brushster a full-feature painting program. You can use it to draw pictures, but Brushster is especially good at making abstract art. Do you love random squiggles and dramatic gestures, or are you happier when everything is neat and orderly? Do you like vibrant colors or soft pastels? Brushster is programmed to paint abstract art, but the tools can be used to create realistic pictures, too. Macintosh users: please download the desktop application or order the free Brushster CD.