S Raspberry Pi Lesson 6. Using SSH. In this lesson you will learn how to remote control your Raspberry Pi over your local network using Secure Shell (SSH). 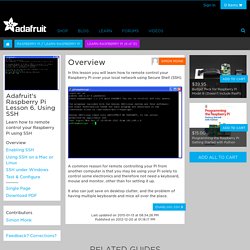 A common reason for remote controlling your Pi from another computer is that you may be using your Pi solely to control some electronics and therefore not need a keyboard, mouse and monitor, other than for setting it up. It also can just save on desktop clutter, and the problem of having multiple keyboards and mice all over the place. Raspberry Pi Wifi Internet Radio Player. For my first project after getting the Raspberry Pi ($35 Linux computer) I wanted to extend on a very good blog post I read from MightyOhm about turning a cheap Wifi router into an internet radio: In that article he also had a cheap Linux device (the router) and was able to stretch it to be a mucic machine. 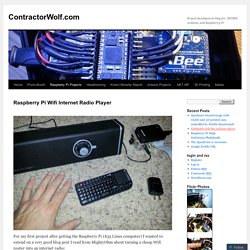 I had no previous experience with Linux, always used and programmed on Windows machines. So I wasn’t sure what to expect when my Raspberry Pi finally arrived. After some initial hickups, I was able to get the device running: I installed MPD, MPC, and SSH on it so that it could be a headless (meaning no monitor) device. I control which stream the player is listening to using the Adafruit Cobbler to breakout the pins so that the python program is just listening for button presses. Review of the year 2014. What a year it has been. 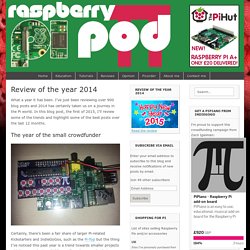 I’ve just been reviewing over 900 blog posts and 2014 has certainly taken us on a journey in the Pi world. In this blog post, the first of 2015, I’ll review some of the trends and highlight some of the best posts over the last 12 months. The year of the small crowdfunder Certainly, there’s been a fair share of larger Pi-related Kickstarters and IndieGoGos, such as the Pi-Top but the thing I’ve noticed this past year is a trend towards smaller projects with lower goals. 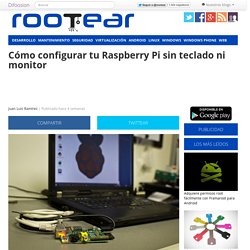 Connecting from other devices 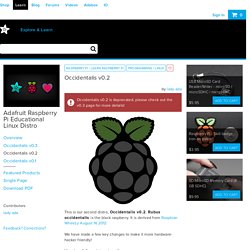 Rubus occidentalis is the black raspberry. It is derived from Raspbian Wheezy August 16 2012 We have made a few key changes to make it more hardware-hacker friendly! Version 0.2 updates (new!) Truncated image - only 2.6G now to fit on any 4G cardraspi-config notice retained on bootRemoved persistant wlan0 entryPassword-change reminder on loginAdded RTC and lm-sensors kernel moduleIncluded kernel modules for: DS1307, AD525x I2C digipots, HMC6352, BMP085, ADS1015New! This distribution is not compatible with Raspberry Pi's that have 'HYNIX' RAM Chips! Click below to download the ZIP file:Adafruit Raspberry Pi Educational Distro - Occidentalis v0.2 ! You will also need a SD or MicroSD card writer to burn the image on. Then follow the directions here, except use the downloaded and uncompressed Occidentalis image instead of Wheezy For details on the I2C, SPI, WiFi, Avahi, and 1-Wire modules please visit the v0.1 page. 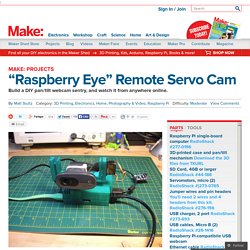 Being able to control where they’re looking remotely, though, takes their usefulness to a whole new level. Whether you’re watching your pets while you’re away or allowing friends to participate in an event from the other side of the world, a web-enabled camera puts the end user in control of the experience. Put a Pi on the Web. 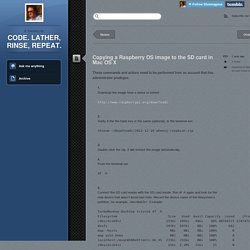 If the above command report an error(dd: bs: illegal numeric value), please change bs=1M to bs=1m (note that dd will not feedback any information until there is an error or it is finished, information will show and disk will re-mount when complete. However if you are curious as to the progress - ctrl-T (SIGINFO, the status argument of your tty) will display some en-route statistics). After the dd command finishes, eject the card: sudo diskutil eject /dev/rdisk1. Keybaord layout issues in X. I was having no luck whatsoever with my Rev2 Pi 512MB running Wheezy 7, trying to get any keyboard to create the correct symbols for all the keys. 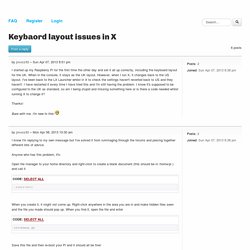 I first noticed this when I wanted to make the # symbol and SHIFT+3 was making the currency symbol for the UK pound. I then found the key that should make the \ and | symbols is making #. It doesn't matter what keyboard I use, or whether I use a powered USB hub or plug it directly into the Pi. I can make the keyboard work properly by executing Code: Select all sudo setxkbmap -layout us but only during the CURRENT X GUI session. Raspberry Pi Voice Recognition Works Like Siri.

This tutorial demonstrate how to use voice recognition on the Raspberry Pi. 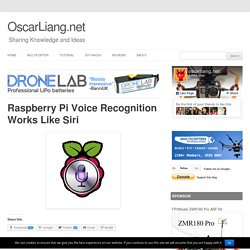 By the end of this demonstration, we should have a working application that understand and answers your oral question. This is going to be a simple and easy project because we have a few free API available for all the goals we want to achieve. It basically converts our spoken question into to text, process the query and return the answer, and finally turn the answer from text to speech.