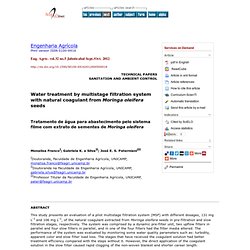 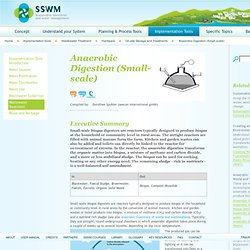 Typically they are airtight, round underground chambers in which anaerobic digestion takes place during a couple of weeks up to several months, depending on the local temperature. Overview flow chart of small-scale agricultural biogas reactors. Source: State Energy Conservation Office SECO (n.y.) Www.sfia.net/wp-content/uploads/2013/02/greywater.jpg. Biofilters Can Reduce Spread Of Porcine Reproduction and Respiratory Syndrome Virus. Preliminary research at South Dakota State University (SDSU) demonstrates that a biofilter can be an effective means of reducing airborne transfer of porcine reproductive and respiratory syndrome (PRRS) virus on production sites that contain more than one barn. 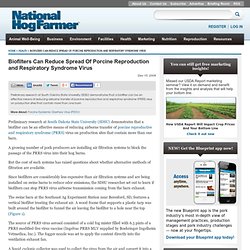 A growing number of pork producers are installing air filtration systems to block the passage of the PRRS virus into their hog barns. But the cost of such systems has raised questions about whether alternative methods of filtration are available. Since biofilters are considerably less expensive than air filtration systems and are being installed on swine barns to reduce odor emissions, the SDSU researcher set out to learn if biofilters can stop PRRS virus airborne transmission coming from the barn exhaust.

The swine barn at the Southeast Ag Experiment Station near Beresford, SD, features a vertical biofilter treating the exhaust air. 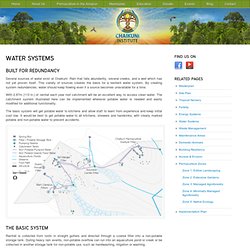 Water/storage/WSp110-112.pdf. Water Storage: Tanks, Cisterns, Ponds & Groundwater. To achieve your design goals for a water system, it is helpful to know what your goals are. 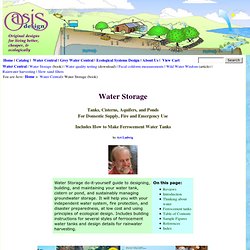 The first order of business is to consider: Why Store Water? Nearly all water systems include some form of storage, most commonly a tank. Storage can be used to: cover peaks in demand smooth out variations in supply provide water security in case of supply interruptions or disaster save your home from fire meet legal requirements improve water quality provide thermal storage and freeze protection enable a smaller pipe to serve for a distant source We're going to consider each of these reasons to store water, then look at design principles to help you frame the goals for your project.

Cover Peaks in Demand The most common function of water storage is to cover short-term use flows that are greater than the flow of the water source. Five questions with Daniele Lantagne. Daniele Lantagne has spent more than a decade fighting against a long list of waterborne killers worldwide. 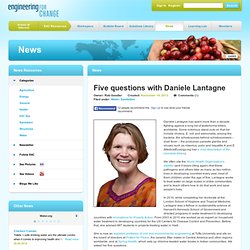 Some notorious stand-outs on that list include cholera, E. coli and salmonella, among the bacteria, the schistosomas behind schistosomiasis – snail fever – the protozoan parasite giardia and viruses such as rotavirus, polio and hepatitis A and E (MedicalEcology.org has a vivid description of the microbial killers). We often cite the World Health Organization's statistic (and it bears citing again) that these pathogens and others take as many as two million lives in developing countries every year, most of them children under the age of five. Lantagne works to treat water on large scales in entire communities and to teach others how to do that work and save people's lives. E4C: When forced to choose, is it better to treat water well for a few people or not so well for a lot of people? From the E4C community: Biotoilets are tough on waste in India.

These biotoilets in a cluster process waste without need for disposal or additional infrastructure. 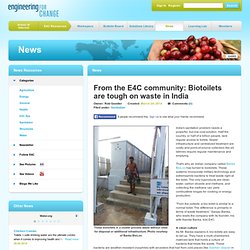 Photo courtesy of Banka BioLoo India's sanitation problem needs a powerful, but low-cost solution. Half the country, or half of a billion people, lack regular access to toilets. Sewer infrastructure and centralized treatment are costly and point-of-source collectors like pit latrines require regular maintenance and emptying. That's why an Indian company called Banka BioLoo has turned to biotoilets.

“From the outside, a bio-toilet is similar to a normal toilet. A clean culture As Mr. Edisonism.com. Details Category: Philippines Medicinal Plants Created on Saturday, 23 July 2011 00:02. 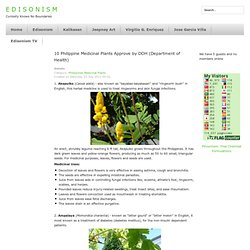 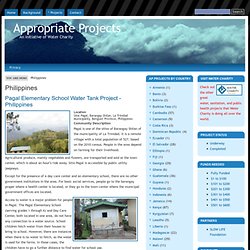 Its capital is Puerto Princesa City. Barangay Mangingisda, which translates to fisherman’s village, is located across the Puerto Princesa Bay from the City’s downtown proper. Travel to the barangay requires either a 30-40 minute banca (wooden catamaran) ride to the Mangingisda wharf followed by a tricycle ride to the Rehabilitation Center, or a 1 hour multi-cab ride on mixed road types including highways and dirt roads. The isolated barangay community is composed of fisherman, small store owners, and laborers who commute to the city each day. One of the major developments in this barangay is a government housing project begun in 2007 to house city residents who lost their homes to fire or were forced to move due to new government construction projects. Wastewater Solutions for Development - Decentralizing wastewater treatment for simplicity and sustainability.

Task Force Detainees of the Philippines - FEATURE - A Tale of Two Villages: People Deprived of the Right to Means of Subsistence. By Nelson C. 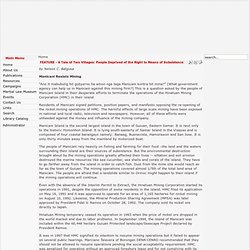 Balgusa Manicani Resists Mining “Ano it mabubulig hit gobyerno ha amon nga taga Manicani kontra hit mina?” (What government agency can help us in Manicani against this mining firm?) This is a question asked by the people of Manicani Island in their desperate efforts to terminate the operations of the Hinatuan Mining Corporation (HMC) in their island. Residents of Manicani signed petitions, position papers, and manifesto opposing the re-opening of the nickel mining operations of HMC.

Manicani Island is the second largest island in the town of Guiuan, Eastern Samar. The people of Manicani rely heavily on fishing and farming for their food –the land and the waters surrounding their island are their sources of subsistence. Even with the absence of the Interim Permit to Extract, the Hinatuan Mining Corporation started its operations in 1991, despite the opposition of some residents in the island. On April of this year 2000, residents of Brgy.

Solutions for Water platform - World Water Forum 6th - Marseille 2012. Health risks a month after Yolanda. Health Posted on 07:06 PM, December 12, 2013 Medicine Cabinet -- Reiner Gloor. Rainwater Harvesting (Rural) Introduction Rainwater harvesting (RWH) is a simple low-cost technique that requires minimum specific expertise or knowledge and offers many benefits. For drinking water purposes in rural areas, the most common technique is small-scale rooftop rainwater harvesting: rainwater is collected on the roof and transported with gutters to a storage reservoir, where it provides water at the point of consumption (for rainwater harvesting for agricultural use see also bunds, field trenches, planting pits, micro-basins, retention basins, sand dams, conjunctive use, gully plug, controlled drainage or fog drip). Collected rainwater can supplement other water sources when they become scarce or are of low quality like brackish groundwater or polluted surface water in the rainy season.

It also provides a good alternative and replacement in times of drought or when the water table drops and wells go dry. The technology is flexible and adaptable to a very wide variety of conditions. Rainfall Catchment Area. Water Purification Awarding Ceremonies. Www.waterdialogues.org/documents/PhilippinesCountryContext.pdf.

Www.who.int/water_sanitation_health/dwq/nutrientschap2.pdf. A new approach to water desalination. The availability of fresh water is dwindling in many parts of the world, a problem that is expected to grow with populations. One promising source of potable water is the world’s virtually limitless supply of seawater, but so far desalination technology has been too expensive for widespread use. Now, MIT researchers have come up with a new approach using a different kind of filtration material: sheets of graphene, a one-atom-thick form of the element carbon, which they say can be far more efficient and possibly less expensive than existing desalination systems.

When water molecules (red and white) and sodium and chlorine ions (green and purple) in saltwater, on the right, encounter a sheet of graphene (pale blue, center) perforated by holes of the right size, the water passes through (left side), but the sodium and chlorine of the salt are blocked.Graphic: David Cohen-Tanugi One common method of desalination, called reverse osmosis, uses membranes to filter the salt from the water.

Community Monitoring During the Construction of a Gravity-fed, Solar Powered Water Supply: A Training Guideline. Www.unwater.org/downloads/WCB/finalpdf/PHL_pagebypage.pdf. A Garden Swing Powered Water Pump. The kids playing after we\\'d finished testing... First-hand accounts of our emergency response. Yann Libessart, MSF emergency team Too many journalists are asking us to compare Typhoon Yolanda [as it’s known locally] and the 2010 earthquake in Haiti. Many of us here were in Port-au-Prince in 2010 and we all agree: the two disasters have nothing in common, and any comparison would be indecent. Already, before 12 January 2010, Haiti faced many disadvantages: poor public services, political instability, urban crime and widespread poverty.

The earthquake hit a state that was already in the midst of a humanitarian crisis. MSF teams had been working on the ground for years and were able to start operating straight away. Before 8 November 2013, the Visayan archipelago was a touristy destination, popular with divers, backpackers, eco-friendly tourists, honeymooners and sexual predators (though I wish we didn’t have to mention those).

A terrible rumor illustrates how the Filipinos learnt the hard way what the term ’storm surge’ meant. Sanitation%20-%20wastewater%20-magtibay.