Toxic Chemical exposure in the workplace 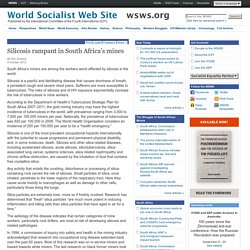 Chernobyl Accident. (Updated October 2015) The Chernobyl accident in 1986 was the result of a flawed reactor design that was operated with inadequately trained personnel.The resulting steam explosion and fires released at least 5% of the radioactive reactor core into the atmosphere and downwind – some 5200 PBq (I-131 eq).Two Chernobyl plant workers died on the night of the accident, and a further 28 people died within a few weeks as a result of acute radiation poisoning.UNSCEAR says that apart from increased thyroid cancers, "there is no evidence of a major public health impact attributable to radiation exposure 20 years after the accident. 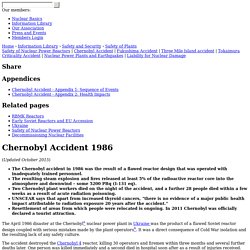 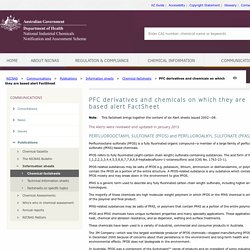 The Alerts were reviewed and updated in January 2013. PERFLUOROOCTANYL SULFONATE (PFOS) and PERFLUOROALKYL SULFONATE (PFAS) Perfluorooctane sulfonate (PFOS) is a fully fluorinated organic compound—a member of a large family of perfluoroalkyl sulfonate (PFAS)-based chemicals. PFOS refers to fully fluorinated (eight-carbon chain length) sulfonate-containing substances. The acid form of PFOS is 1,1,2,2,3,3,4,4,5,5,6,6,7,7,8,8,8-heptadecafluoro-1-octanesulfonic acid (CAS No. 1763-23-1). PFOS-related substances may be salts of PFOS e.g. potassium, lithium, ammonium or diethanolamine, or polymers that contain the PFOS as a portion of the entire structure. PFAS is a generic term used to describe any fully fluorinated carbon chain length sulfonate, including higher and lower homologues.

PFAS-related substances may be salts of PFAS, or polymers that contain PFAS as a portion of the entire polymer. Australian data. Very long PDF of PCFOS health effects report. Perfluorooctane Sulfonate (PFOS) and related chemical products. Fiskville sheep farmers tell inquiry toxic firefighting chemical 'in soil, grass, sheep ... and our children' Updated Toxic chemicals used at the CFA's (Country Fire Authority) Fiskville training centre contaminated a nearby sheep farm with the property owners saying it is in their "soil, grass, our sheep ... and our kids", a Victorian parliamentary inquiry has heard. 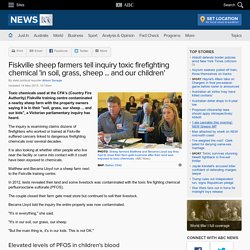 The inquiry is examining claims dozens of firefighters who worked or trained at Fiskville suffered cancers linked to dangerous firefighting chemicals over several decades. It is also looking at whether other people who live near the facility or came into contact with it could have been exposed to chemicals. Matthew and Becarra Lloyd run a sheep farm next to the Fiskville training centre. 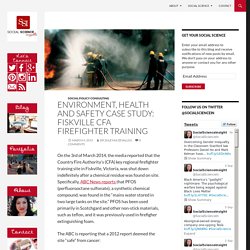 Specifically, ABC News reports that PFOS (perfluorooctane sulfonate), a synthetic chemical compound, was found in the “mains water stored in two large tanks on the site.” PFOS has been used primarily in Scotchgard and other non-stick materials, such as teflon, and it was previously used in firefigher extinguishing foam. The ABC is reporting that a 2012 report deemed the site “safe” from cancer: A report in 2012 confirmed firefighters had been exposed to chemicals through water used in hot fire training exercises. But the report also declared the facility was safe and said the risk of getting cancer was low.

This is incorrect. In 2012, I was contracted as the Senior Analyst on the Independent Fiskville Investigation (IFI). Fiskville fire training centre cancer concerns to be investigated. Updated The Fiskville fire training facility in Victoria is to be the subject of a joint parliamentary committee investigation into concerns firefighters were exposed to toxic chemicals between 1970 and 1990. 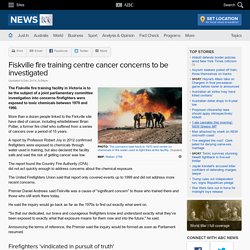 More than a dozen people linked to the Fiskville site have died of cancer, including whistleblower Brian Potter, a former fire chief who suffered from a series of cancers over a period of 15 years. A report by Professor Robert Joy in 2012 confirmed firefighters were exposed to chemicals through water used in training, but also declared the facility safe and said the risk of getting cancer was low.

The report found the Country Fire Authority (CFA) did not act quickly enough to address concerns about the chemical exposure. The United Firefighters Union said that report only covered events up to 1999 and did not address more recent concerns. Fiskville CFA fire-training facility closed indefinitely after chemical residue found in water. Updated The Victorian Country Fire Authority's (CFA) training facility at Fiskville, north-west of Melbourne, has been closed indefinitely after chemical residue was found in the water supply. 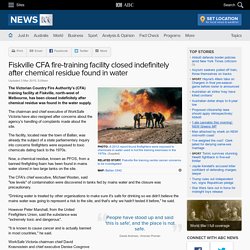 The chairman and chief executive of WorkSafe Victoria have also resigned after concerns about the agency's handling of complaints made about the site. The facility, located near the town of Ballan, was already the subject of a state parliamentary inquiry into concerns firefighters were exposed to toxic chemicals dating back to the 1970s. Now, a chemical residue, known as PFOS, from a banned firefighting foam has been found in mains water stored in two large tanks on the site. The CFA's chief executive, Michael Wooten, said "low levels" of contamination were discovered in tanks fed by mains water and the closure was precautionary. People have stood up and said 'this is safe', and the place is not safe. 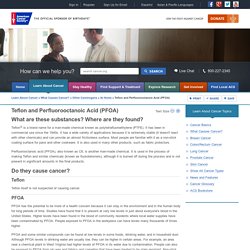 It has been in commercial use since the 1940s. It has a wide variety of applications because it is extremely stable (it doesn't react with other chemicals) and can provide an almost frictionless surface. Most people are familiar with it as a non-stick coating surface for pans and other cookware. It is also used in many other products, such as fabric protectors. Perfluorooctanoic acid (PFOA), also known as C8, is another man-made chemical. Teflon Teflon itself is not suspected of causing cancer. PFOA has the potential to be more of a health concern because it can stay in the environment and in the human body for long periods of time. Perfluorinated chemicals (PFCs) FactSheet - NICNAS.

Perfluorinated chemicals (PFCs) form a group of chemicals that has many speciality applications. 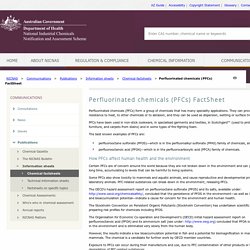 They can provide resistance to heat, to other chemicals or to abrasion, and they can be used as dispersion, wetting or surface treatments. PFCs have been used in non-stick cookware, in specialised garments and textiles, in Scotchgard™ (used to protect fabric, furniture, and carpets from stains) and in some types of fire-fighting foam.