Fixed versus growth intelligence mindsets: It's all in your head, Dweck says. February 7, 2007 By Lisa Trei When psychology Professor Carol Dweck was a sixth-grader at P.S. 153 in Brooklyn, N.Y., she experienced something that made her want to understand why some people view intelligence as a fixed trait while others embrace it as a quality that can be developed and expanded. 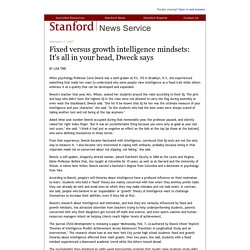 Dweck's teacher that year, Mrs. Wilson, seated her students around the room according to their IQ. The girls and boys who didn't have the highest IQ in the class were not allowed to carry the flag during assembly or even wash the blackboard, Dweck said. Asked what seat number Dweck occupied during that memorable year, the professor paused, and silently raised her right index finger. From that experience, Dweck became fascinated with intelligence, convinced that IQ tests are not the only way to measure it. Dweck, a soft-spoken, elegantly attired woman, joined Stanford's faculty in 2004 as the Lewis and Virginia Eaton Professor. 21 Interesting Facts About Our Brain - Examined Existence. Just a little over 20 years ago, we thought the brain’s plasticity was fixed and could not change itself. 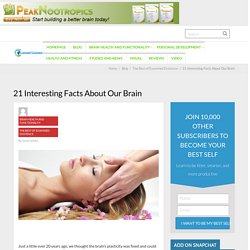 However, recent uncoverings by science has debunked this myth and proven that the brain is capable of vast change. 21 Interesting Facts About Our Brain - Examined Existence. Appraising the brain's energy budget. In the average adult human, the brain represents about 2% of the body weight. 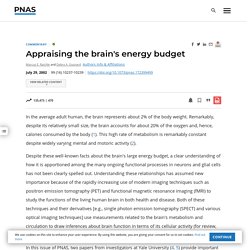 Despite these well-known facts about the brain's large energy budget, a clear understanding of how it is apportioned among the many ongoing functional processes in neurons and glial cells has not been clearly spelled out. Understanding these relationships has assumed new importance because of the rapidly increasing use of modern imaging techniques such as positron emission tomography (PET) and functional magnetic resonance imaging (fMRI) to study the functions of the living human brain in both health and disease.

Two observations emerge from this work. The Cost of Ongoing or Baseline Activity. Your Amazing Brain. When Power Goes To Your Head, It May Shut Out Your Heart. Neuroscientists have found evidence to suggest feeling powerful dampens a part of our brain that helps with empathy. 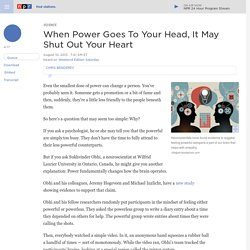 6 Incredible Brain Facts. 80 Things You Probably Didn't Know About Psychology. Psychology offers a multitude of insights into not only our own minds and behaviors, but also the thoughts and actions of those around us. 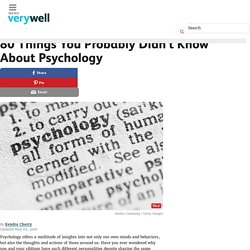 Have you ever wondered why you and your siblings have such different personalities despite sharing the same genetic and environmental background? Curious about why people sometimes behave differently in groups than they would when they are alone? Psychology research can offer answers to many of these questions. The following are just a few fascinating facts about different topics within psychology. Check through these lists to learn some new things about personality, social behavior, child development, and much more.

Age of Distraction: Why It’s Crucial for Students to Learn to Focus. Digital classroom tools like computers, tablets and smartphones offer exciting opportunities to deepen learning through creativity, collaboration and connection, but those very devices can also be distracting to students. 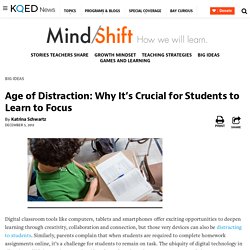 Similarly, parents complain that when students are required to complete homework assignments online, it’s a challenge for students to remain on task. The ubiquity of digital technology in all realms of life isn’t going away, but if students don’t learn how to concentrate and shut out distractions, research shows they’ll have a much harder time succeeding in almost every area. “The real message is because attention is under siege more than it has ever been in human history, we have more distractions than ever before, we have to be more focused on cultivating the skills of attention,” said Daniel Goleman, a psychologist and author of Focus: The Hidden Driver of Excellence and other books about social and emotional learning on KQED’s Forum program. Age of Distraction: Why It’s Crucial for Students to Learn to Focus.

Your Brain Isn't a Computer. It's a Quantum Field. By Daphne Muller The irrationality of how we think has long plagued psychology. 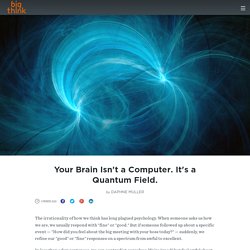 When someone asks us how we are, we usually respond with "fine" or "good. " But if someone followed up about a specific event — "How did you feel about the big meeting with your boss today? " — suddenly, we refine our "good" or "fine" responses on a spectrum from awful to excellent. In less than a few sentences, we can contradict ourselves: We’re "good" but feel awful about how the meeting went. Enter quantum cognition: A team of researchers has determined that while our choices and beliefs don’t often make sense or fit a pattern on a macro level, at a "quantum" level, they can be predicted with surprising accuracy. The quantum-cognition theory opens the fields of psychology and neuroscience to understanding the mind not as a linear computer, but rather an elegant universe.