Holland Codes. The Holland Codes or the Holland Occupational Themes (RIASEC), is a theory of careers and vocational choice based upon personality types. 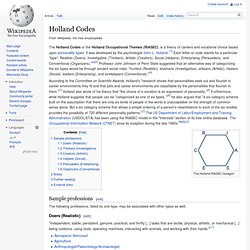 It was developed by the psychologist John L. Holland. [1] Each letter or code stands for a particular "type": Realistic (Doers), Investigative (Thinkers), Artistic (Creators), Social (Helpers), Enterprising (Persuaders), and Conventional (Organizers). Linda Berens. Handbook of Personality Psychology. Robert Hogan (psychologist) Robert Hogan (born 1937) is an American psychologist known for his innovations in personality testing, and is an international authority on personality assessment, leadership, and organizational effectiveness. 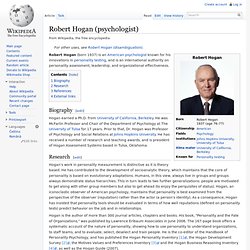 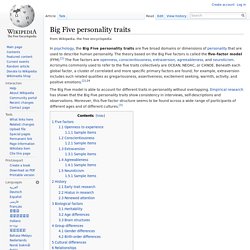 The theory based on the Big Five factors is called the five-factor model (FFM).[1] The five factors are openness, conscientiousness, extraversion, agreeableness, and neuroticism. Acronyms commonly used to refer to the five traits collectively are OCEAN, NEOAC, or CANOE. Beneath each global factor, a cluster of correlated and more specific primary factors are found; for example, extraversion includes such related qualities as gregariousness, assertiveness, excitement seeking, warmth, activity, and positive emotions.[2]:24 The Big Five model is able to account for different traits in personality without overlapping. Empirical research has shown that the Big Five personality traits show consistency in interviews, self-descriptions and observations. §Five factors[edit] Openness to experience: (inventive/curious vs. consistent/cautious). Framing (social sciences) In the social sciences, framing is a set of concepts and theoretical perspectives on how individuals, groups, and societies organize, perceive, and communicate about reality. 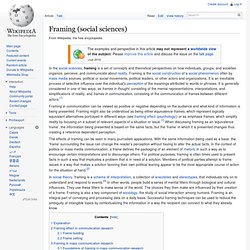 Framing is the social construction of a social phenomenon often by mass media sources, political or social movements, political leaders, or other actors and organizations. It is an inevitable process of selective influence over the individual's perception of the meanings attributed to words or phrases. Framing (social sciences) Microsoft PowerPoint - BELBIN(uk)-2011-Invs+Handouts-FromAccredWorkbook.pptx. Temperament Evolution. By Linda V. 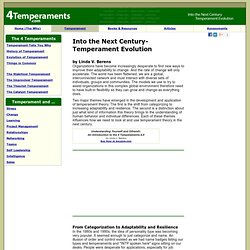 Berens Organizations have become increasingly desperate to find new ways to improve their adaptability to change. And the rate of change will only accelerate. The world has been flattened, we are a global, interconnected network and must interact with diverse sets of individuals, groups and communities. The models we use to try to assist organizations in this complex global environment therefore need to have built-in flexibility so they can grow and change-as everything does.

Two major themes have emerged in the development and application of temperament theory. True Colors Personality Research and History. In 1978, founder Don Lowry, the person behind True Colors, became interested in the work of clinical psychologist David Keirsey. 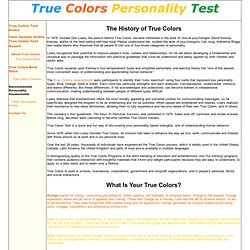 Keirsey, author of the best-selling self-help book Please Understand Me, studied the work of psychologists Carl Jung, Katherine Briggs and Isabel Myers who theorized that all people fit into one of four broad categories of personality. Lowry recognized their potential to improve people’s lives, careers and relationships. So he set about developing a fundamental and universal way to package the information into practical guidelines that could be understood and easily applied by both children and adults alike.

True Colors expands upon Keirsey’s four temperament types and simplifies personality and learning theory into “one of the easiest, most convenient ways of understanding and appreciating human behavior.” The company’s first guidebook, The Keys To Personal Success, was published in 1979. Gold is the body's natural perceptions. Blue represents calm. Disclaimer. Keirsey Temperament Sorter. Heading text[edit] The Keirsey Temperament Sorter (KTS) is a self-assessed personality questionnaire designed to help people better understand themselves and others. 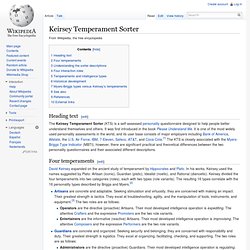 It was first introduced in the book Please Understand Me. It is one of the most widely used personality assessments in the world, and its user base consists of major employers including Bank of America, Allstate, the U.S. Myers-Briggs Type Indicator. Model of personality types A chart with descriptions of each Myers–Briggs personality type and the four dichotomies central to the theory The Myers–Briggs Type Indicator (MBTI) is an introspective self-report questionnaire indicating differing psychological preferences in how people perceive the world and make decisions.[1][2][3] 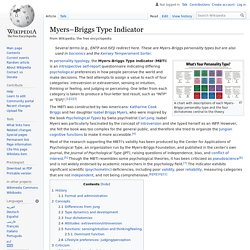 Personality type. This article is about the generic aspects of type theory. 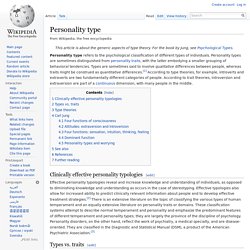 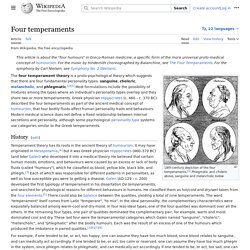 The Greek physician Hippocrates (c. 460 – c. 370 BC) described the four temperaments as part of the ancient medical concept of humorism, that four bodily fluids affect human personality traits and behaviors. Though modern medical science does not define a fixed relationship between internal secretions and personality, some psychological personality type systems use categories similar to the Greek temperaments. Free, Scientific Personality Tests Online. Design and innovation management management - Guiding principles of good design. An effective way to assess the relative strengths and weaknesses of a team. Helps the team to understand ways in which it could improve performance. Description. BELBIN®: The home of Belbin Team Roles. Belbin team roles. Big Five personality theory.

Temperament Colour Rating. Appreciating Differences - Jack Falt - Ottawa area, Ontario, Canada Return to Home Page List of Articles by Jack Falt This quiz was made up based of statements in David Keirsey's book Please Understand Me II. You can print out this page (3 pages) and rate each statment to determine your possible temperament colour. You can also download the same quiz in Adobe PDF format. Personality Dimensions®