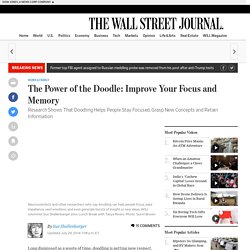 Recent research in neuroscience, psychology and design shows that doodling can help people stay focused, grasp new concepts and retain information. A blank page also can serve as an extended playing field for the brain, allowing people to revise and improve on creative thoughts and ideas. Doodles are spontaneous marks that can take many forms, from abstract patterns or designs to images of objects, landscapes, people or faces. Some people doodle by retracing words or letters, but doodling doesn't include note-taking. Forbes Welcome. Welcome. Welcome. Memories of errors foster faster learning. Using a deceptively simple set of experiments, researchers at Johns Hopkins have learned why people learn an identical or similar task faster the second, third and subsequent time around. 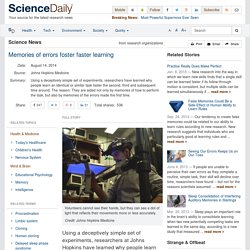 The reason: They are aided not only by memories of how to perform the task, but also by memories of the errors made the first time. "In learning a new motor task, there appear to be two processes happening at once," says Reza Shadmehr, Ph.D., a professor in the Department of Biomedical Engineering at the Johns Hopkins University School of Medicine. "One is the learning of the motor commands in the task, and the other is critiquing the learning, much the way a 'coach' behaves. Learning the next similar task goes faster, because the coach knows which errors are most worthy of attention. This Is Your Brain on Writing. A novelist scrawling away in a notebook in seclusion may not seem to have much in common with an NBA player doing a reverse layup on a basketball court before a screaming crowd. 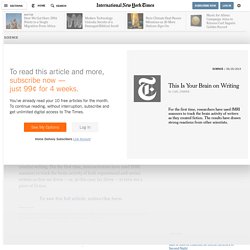 But if you could peer inside their heads, you might see some striking similarities in how their brains were churning. That’s one of the implications of new research on the neuroscience of creative writing. For the first time, neuroscientists have used fMRI scanners to track the brain activity of both experienced and novice writers as they sat down — or, in this case, lay down — to turn out a piece of fiction. The researchers, led by Martin Lotze of the University of Greifswald in Germany, observed a broad network of regions in the brain working together as people produced their stories. But there were notable differences between the two groups of subjects. 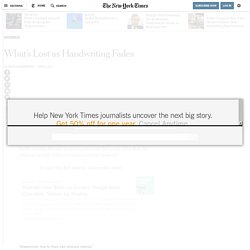 Not very much, according to many educators. The Common Core standards, which have been adopted in most states, call for teaching legible writing, but only in kindergarten and first grade. Dunning-Kruger Effect: When Distorted Self-Perception and Illusions of Competence Trick Entertainers, Politicians, and Cities. American Idol (Photo credit: Wikipedia) Steve Mensing, Editor ♦While many have not heard of the Dunning-Kruger Effect, no doubt more than a few of us have watched those shows starting a new season of American Idol. 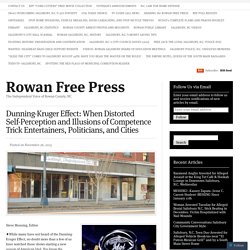 You know the ones where people, with no talent or skill at singing, grab center stage and draw eye-rolls and muted chuckles from the judges. Surely we’ve seen wannabe politicians become baffled when someone questions them about a major issue. Even some municipalities are said to suffer from inflated self-perception. The Dunning-Kruger Effect is the extreme bias that some untalented and unskilled persons suffer from when they rate their ability at a much higher level than it actually is. Back in 1999 David Dunning and Justin Kruger tested the Dunning-Kruger Effect in a series of experiments at Cornell University. . • Tend to overestimate their own level of skill. Log In. Log In. Scholars Turn Their Attention to Attention. Imagine that driving across town, you've fallen into a reverie, meditating on lost loves or calculating your next tax payments. 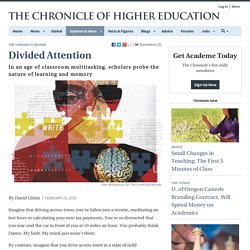 You're so distracted that you rear-end the car in front of you at 10 miles an hour. You probably think: Damn. My fault. My mind just wasn't there. By contrast, imagine that you drive across town in a state of mild exhilaration, multitasking on your way to a sales meeting. That illusion of competence is one of the things that worry scholars who study attention, cognition, and the classroom. "Heavy multitaskers are often extremely confident in their abilities," says Clifford I. Indeed, last summer Nass and two colleagues published a study that found that self-described multitaskers performed much worse on cognitive and memory tasks that involved distraction than did people who said they preferred to focus on single tasks.

Be lucky - it's an easy skill to learn. Take the case of chance opportunities. 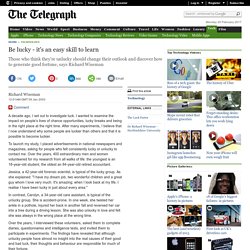 Lucky people consistently encounter such opportunities, whereas unlucky people do not. I carried out a simple experiment to discover whether this was due to differences in their ability to spot such opportunities. I gave both lucky and unlucky people a newspaper, and asked them to look through it and tell me how many photographs were inside. On average, the unlucky people took about two minutes to count the photographs, whereas the lucky people took just seconds. Why? For fun, I placed a second large message halfway through the newspaper: "Stop counting. The 30 Second Habit That Can Have a Big Impact On Your Life  There are no quick fixes. 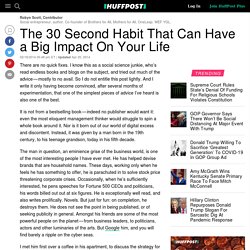 I know this as a social science junkie, who's read endless books and blogs on the subject, and tried out much of the advice -- mostly to no avail. So I do not entitle this post lightly.