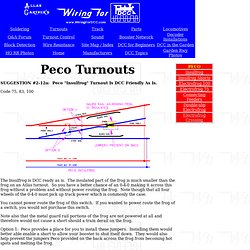 Code 75, 83, 100 The Insulfrog is DCC ready as is. The insulated part of the frog is much smaller than the frog on an Atlas turnout. So you have a better chance of an 0-4-0 making it across this frog without a problem and without power routing the frog. You cannot power route the frog of this switch. Note also that the metal guard rail portions of the frog are not powered at all and therefore would not cause a short should a train derail on the frog. Option 1: Peco provides a place for you to install these jumpers. Wiring for DCC by Allan Gartner - TOC/Introduction Page. Welcome! 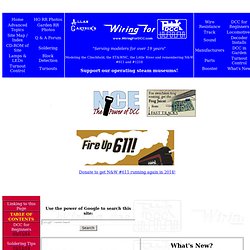 I get a lot of questions about wiring for Digital Command Control. This web page is my way of giving something back to the hobby. I intend this web page for all systems. I hope you enjoy this website. I am an electrical and computer engineer with experience in computers, radio (which has more to do with DCC than you realize!) You will find this website is large and comprehensive. 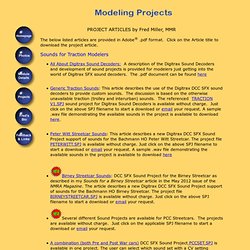 Click on the Article title to download the project article. Tony's Train Exchange, DCC Train Systems, Decoders by Digitrax, NCE, Soundtraxx, QSI, Lenz, LokSound, DCC Locomotives by Broadway LTD, Walthers, Bachmann, Atlas. Knowledge Base. Using Quantum Programmer as a Command Station. Home > Products > Tech Info > By Paul Turvill Introduction Since the Quantum Programmer by QSI Solutions normally connects directly to an isolated section of track, and, with the help of appropriate software (i.e., Quantum CV Manager ), is capable of not only programming, but also controlling model trains, it doesn’t take much of a logical leap to conclude that the Quantum Programmer is, in fact, a bona fide command station. In fact, by feeding the Quantum Programmer’s outputs to a DCC booster rather than directly to the rails, it can be used to simultaneously operate a variety of locomotives and other equipment consuming current up to the limit of the attached booster. 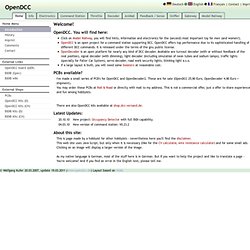 You will find here: Click on Model Railway, you will find hints, information and electronics for the (second) most important toy for men (and women!). OpenDCC is an open project for a command station supporting DCC. OpenDCC offers top performance due to its sophisticated handling of different DCC commands. Innovative Model Railroad Control System. Route-gen-en - Rocrail. The ID is used throughout the Rocrail program as a unique key for referencing this route and is therefore very important. 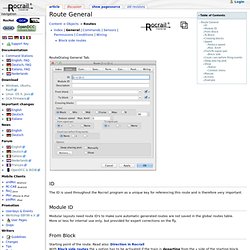 Module ID Modular layouts need route ID's to make sure automatic generated routes are not saved in the global routes table. Blockgroups-en - Rocrail. A Block Group is two or more adjacent blocks that are tied together. 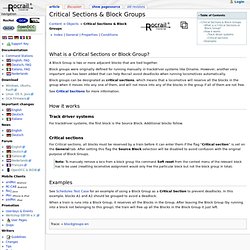 Block groups were originally defined for running manually in trackdriver systems like Dinamo. However, another very important use has been added that can help Rocrail avoid deadlocks when running locomotives automatically. Block groups can be designated as critical sections, which means that a locomotive will reserve all the blocks in the group when it moves into any one of them, and will not move into any of the blocks in the group if all of them are not free.

Signals-ahead-en - Rocrail. Introduction Most signal systems need to know if one ore more blocks ahead are free to determine the aspect. 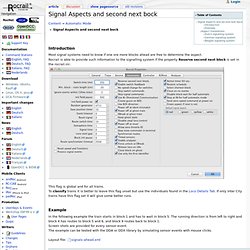 Rocrail is able to provide such information to the signalling system if the property Reserve second next block is set in the rocrail.ini: This flag is global and for all trains. To classify trains it is better to leave this flag unset but use the individuals found in the Loco Details Tab. If only Inter City trains have this flag set it will give some better runs. Example In the following example the train starts in block 1 and has to wait in block 5. Layout file: signals-ahead.xml Aspect Table. Mgv-overview-en - Rocrail. The GCA-Modules Content → Hardware → GCA Loconet® The development of technical parts for the railroad has a long history with me. 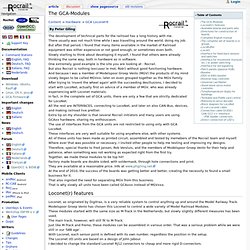 There usually was not much time while I was travelling around the world, doing my job. But after that period, I found that many items available in the market of Railroad equipment was either expensive or not good enough, or sometimes even both. Slowly starting to think about developing it myself, I found that others were already thinking the same way, both in hardware as in software. Loconet(r) features Loconet, as originated by Digitrax, is a very reliable system to control anything up and around the Model Railway Track.