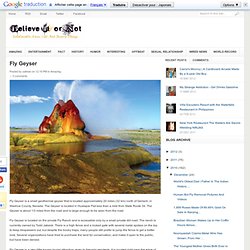 The Geyser is located in Hualapai Flat less than a mile from State Route 34. The Geyser is about 1/3 miles from the road and is large enough to be seen from the road. Fly Geyser is located on the private Fly Ranch and is accessible only by a small private dirt road. Science News, Science Research, Science Articles. Saturn's Enceladus: A Hotspot for Life. Heat maps of the surface show higher temperatures than previously known in the south polar region, with hot tracks running the length of giant fissures. 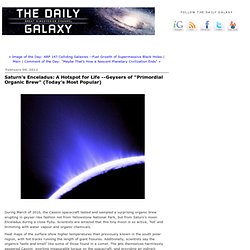 Additionally, scientists say the organics ‘taste and smell’ like some of those found in a comet. The jets themselves harmlessly peppered Cassini, exerting measurable torque on the spacecraft, and providing an indirect measure of the plume density. "A completely unexpected surprise is that the chemistry of Enceladus, what's coming out from inside, resembles that of a comet," said Hunter Waite, principal investigator for the Cassini Ion and Neutral Mass Spectrometer at the Southwest Research Institute in San Antonio. "To have primordial material coming out from inside a Saturn moon raises many questions on the formation of the Saturn system. " The Panda's Thumb.