Comparing Apples and Googles: The App Store vs. Google Play (infographic) Apple owns only 18 percent of the app universe, but it banks almost 500 percent more than Google, pulling in a sweet $5.1 million in revenue each and every day. 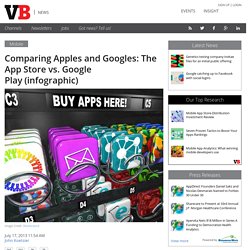 Meanwhile, Google owns 75 percent of all app downloads, but it only takes in $1.1 million per day. These are just two of the highlights in a new “unconventional comparison” between the two largest software distribution outlets on the planet today: Apple’s App Store and Google Play. Not shockingly, Google Play has better search, showing apps even when people misspell the name or category. In addition, people on Google Play apparently just wanna have fun: 26 percent of Google Play apps are games, versus just 14 percent on the app store.

One thing both Apple and Google have in common: They both lead their own app store in number of downloaded apps. Samsung Galaxy S4 price, specifications, features, comparison. iOS 6: What you need to know. It’s been a busy start to Apple’s Worldwide Developers Conference: Not only was Monday’s keynote jam-packed with information, but the company continued to release products and programs throughout the day—enough to make anyone’s head reel a bit. 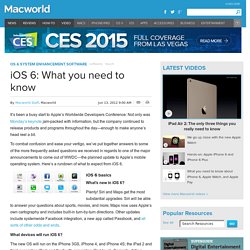 To combat confusion and ease your vertigo, we’ve put together answers to some of the more frequently asked questions we received in regards to one of the major announcements to come out of WWDC—the planned update to Apple’s mobile operating system. Here’s a rundown of what to expect from iOS 6. iOS 6 basics. iPhone 5s vs. Galaxy S4. Earlier this year, Samsung launched the Galaxy S4, which some considered to be a minor update over the Galaxy S3. 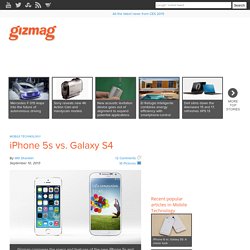 But Apple's new iPhone 5s might be an even more iterative update, apart from one or two marquee features. Which comes out on top? It's too early to say for sure, but we can start by comparing the specs and features of the companies' two latest flagships, the iPhone 5s and Galaxy S4. View all Size. United Kingdom) - Apple Press Info - Apple Introduces iPhone 5. iPhone 5 - Technical Specifications. Apple takes a complete product life cycle approach to determining our environmental impact. 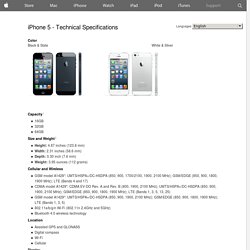 Learn more *To identify your iPhone 5 model number, see For details on LTE support, contact your carrier and see Some features, applications, and services are not available in all areas. See your carrier for details. Application availability and pricing are subject to change. The History of Mobile Phone Technology - History Of... Reference Library. A Visual History of The Mobile Phone. Telephone timeline: A brief history of the phone. Telephones have changed dramatically since Alexander Graham Bell spoke the first words into a telephone on March 10, 1876. 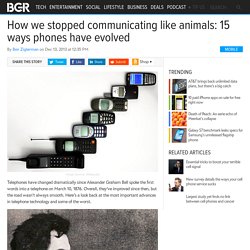 Overall, they’ve improved since then, but the road wasn’t always smooth. Here’s a look back at the most important advances in telephone technology and some of the worst. The original phone On March 10, 1876, Alexander Graham Bell spoke into his device and said to his assistant, “Mr. "The Future Of Mobile Is The Future Of Everything" The history of smartphones: timeline. January 2007 Steve Jobs, chief executive of Apple, unveils the iPhone, which he says is "a revolutionary and magical product that is literally five years ahead of any other mobile phone". 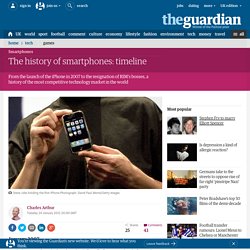 Microsoft chief executive Steve Ballmer calls it "the most expensive phone in the world". History Of The Cell Phone (Tech Infographics) - 1922: The police in Chicago experimented a radio telephone which broadcast at a frequency just above the AM radio band. - 1940: The US Army Signal Corps communicated via radio in the field during wartime. - 1959: Reginald Blevins, the Postmaster General of the UK, inaugurates the first radio telephone service for motorists. 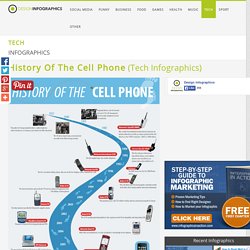 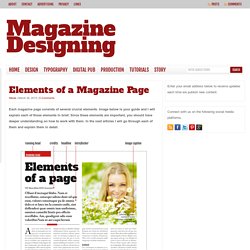 Image below is your guide and I will explain each of those elements in brief. Since these elements are important, you should have deeper understanding on how to work with them. Design Principles: Connecting And Separating Elements Through Contrast And Similarity. Advertisement Similarity and contrast, connection and separation, grouped and ungrouped are all ways to describe the varying sameness and difference between elements. 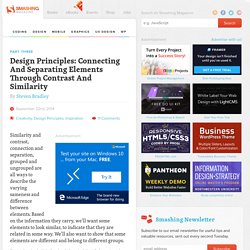 Based on the information they carry, we’ll want some elements to look similar, to indicate that they are related in some way. We’ll also want to show that some elements are different and belong to different groups. Key to showing both is the visual characteristics of elements and their relationships.

If two elements are related in some way, then they should show similar visual characteristics. Note: This is the third post in a series on design principles. 1400+ Magazine Design - Magazine Templates. How much does it cost Apple to build an iPhone 5? How much does an iPhone cost to make? We all know technology manufacturers are in the business they are in to make a profit, so it should come as no surprise that there is some markup on the cost price of a smartphone and how much a smartphone is sold for. 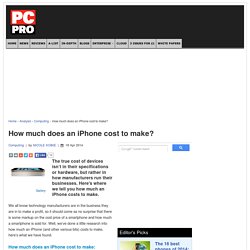 Well, we’ve done a little research into how much an iPhone (and other various bits) costs to make, here’s what we have found. How much does an iPhone cost to make: introduction How much do you want to pay for your next smartphone or tablet? If you’re looking to cut costs, you don’t need to skimp on the specification: there’s so much more to pricing devices than what’s in the box. Galaxy S4 Versus iPhone 5S. The New Samsung Galaxy S4: Everything You Need To Know. In a stunning, broadway-inspired presentation, complete with a huge stage, curtains and three wide-screen cinematic-range screens, the much-awaited Samsung Galaxy S4 made an entrance. S4 is touted the Life Companion with plenty of user-friendly features that connects people through richer photos, breaking language barriers, offering better security and compartmentalization between fun and work while keeping track of your health.

Under the microscope: Samsung Galaxy S4 vs. iPhone 5. It’s a tricky business, comparing iPhone and Galaxy smartphones. Too often the conversation disintegrates into fingerpointing, one-upmanship, and sermons from the Church of the Holy Fanboy. But when it comes down to it, we're talking about two great smartphones. iPhone Touch Screen - HowStuffWorks. Electronic devices can use lots of different methods to detect a person's input on a touch screen. Most of them use sensors and circuitry to monitor changes in a particular state. Many, including the iPhone, monitor changes in electrical current. Others monitor changes in the reflection of waves. These can be sound waves or beams of near-infrared light. A few systems use transducers to measure changes in vibration caused when your finger hits the screen's surface or cameras to monitor changes in light and shadow.

The Evolution Of The Cell Phone—How Far It's Come! Editor's note: This post was originally published by our partners at PopSugar Tech. In April 1973, Motorola engineer Marty Cooper made the first call from a "real handheld portable cell phone," a point he made very clear during that historic conversation with Joel Engel, the head of rival research firm Bell Labs. Fast forward to June 29, 2007, and the iPhone was born. Now in 2014, innovation is showing no sign of slowing down. Since that fateful phone call four decades ago, mobile phones have evolved dramatically. Those magical portable technology boxes have become an essential part of interpersonal communication, and their significance will only increase with time.

The Samsung Galaxy: a history of the S series. When Samsung unveiled the Galaxy S5, the world sat up and took notice, simply because it's one of the most anticipated phones for 2014. But how did the South Korean giant become so influential in the mobile phone market? Lest we forget, it was a no-hoper just a few years ago, spraying out demi-smartphones that were met with shrugs and derision in equal measure.

Then Android emerged, Samsung decided that enough was enough, and it decided to take the plunge and become a fish in Google's pond. Samsung’s Smartphone History: From Zero to Galaxy S4. iOS: A visual history. In what is widely regarded as his greatest presentation ever, Apple's Steve Jobs introduced the iPhone to the world on January 9th, 2007. In the five-plus years since then, the iPhone, iPad, and iPod Touch have literally redefined the entire world of mobile computing. That world is moving so quickly that iOS is already amongst the older mobile operating systems in active development today.

Multitouch input method - Mobile terms glossary. How to setup and start using your new iPhone 5, iPhone 4S, or iPhone 4. Nine Ways the Apple iPhone Redefined the Smartphone in 2007. The History of the Smartphone. Oh memories. There’s nothing quite like writing something like this where I get to walk down the path of the past and remind myself of what it was like the first time that I held any number of the devices about which I’m getting ready to write. The evolution of the smartphone. iPhone 5 Teardown. The iPhone 5 practically flew apart under our nimble spudgers once we got it on the operating table. ChiuCT-AIHS-HCI1993. Samsung Galaxy S4: User Interface Walkthrough.