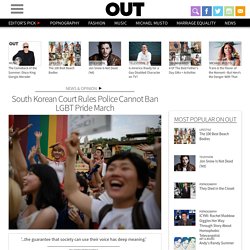 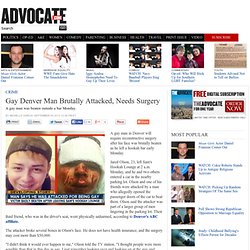 A gay man in Denver will require reconstructive surgery after his face was brutally beaten as he left a hookah bar early Monday. Jared Olson, 23, left Sam's Hookah Lounge at 2 a.m. Monday, and he and two others entered a car in the nearby parking lot. San Antonio LGBT Anti-Discrimination Law Draws Hundreds To 'Pray' In Protest. The City Council of San Antonio, Texas, is currently in the process of considering whether or not to offer nondiscrimination protection for individuals based on sexual orientation and gender identity within already existing legislation. 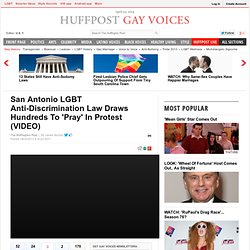 Bridegroom - The Trailer and why Marriage Equality is NOT "Re-Defining Marriage" Tell Congress to PASS ENDA! LGBT Leaders Look Past Gay-Friendly Wall Street. Finance firms can move fast when it benefits the bottom line. 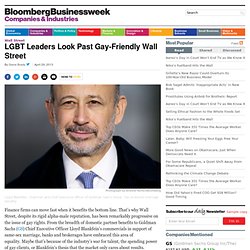 That’s why Wall Street, despite its rigid alpha-male reputation, has been remarkably progressive on the issue of gay rights. From the breadth of domestic partner benefits to Goldman Sachs (GS) Chief Executive Officer Lloyd Blankfein’s commercials in support of same-sex marriage, banks and brokerages have embraced this area of equality. Maybe that’s because of the industry’s war for talent, the spending power of gay clients, or Blankfein’s thesis that the market only cares about results.

Whatever the reason, the finance sector’s rapid adoption of gay-friendly practices presents an interesting challenge for Todd Sears. He founded Out on the Street, a lesbian, gay, bisexual, and transgender (LGBT) group that’s grown from six member companies to 15 over the past three years. LGBT. New York legislature aims to protect transgender job seekers from discrimination. 45 min ago | Mid-Day Mumbai Now, transgenders will vote with their heads held high It has taken them over 60 years and more than a dozen general elections to be recognised for who they are. 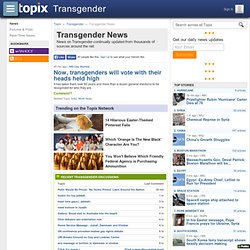 Trending on the Topix Network 4 hrs ago | EDGE UN conference provokes heated gay rights debate Many countries at this week's U.N. population conference are objecting to the idea of enshrining the right of women to make their own sexual decisions, fearing it would tacitly condone same-sex relationships, the U.N. population chief said. 8 hrs ago | Towleroad Transgender Police Officer Running for Oklahoma House Seat: VIDEO Paula Sophia is running for house district 88 after spending twenty-two years on the Oklahoma city police force. 12 hrs ago | Suria Indian transgender stands for office... Poll Suggests LGBT Employees Have Excellent Job Qualifications. Obama Administration Urges Supreme Court To Strike Down DOMA. The Obama administration on Friday urged the Supreme Court to strike down the Defense Of Marriage Act in a brief that calls the law unconstitutional because it violates "the fundamental guarantee of equal protection. 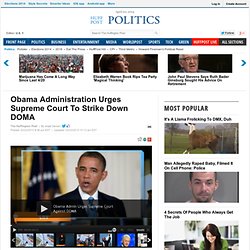 " Solicitor General Donald Verrilli argues in the brief that Section 3 of the 1996 federal law prohibits the marriage of same-sex couples and should get the court's close scrutiny. "The law denies to tens of thousands of same-sex couples who are legally married under state law an array of important federal benefits that are available to legally married opposite-sex couples. Because this discrimination cannot be justified as substantially furthering any important governmental interest, Section 3 is unconstitutional. " DOMA, which defines marriage as between one man and one woman, has been found unconstitutional by lower courts. The Supreme Court has agreed to hear an appeal in one of those cases, U.S. v. New Details Emerge About Roger Gorley's Arrest For Refusing To Leave Sick, Gay Partner.

The story of a gay man who was arrested for refusing to the leave his sick partner at a Missouri hospital made headlines across the nation earlier this week. 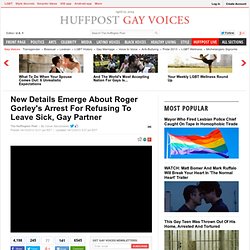 Now, new details about the ordeal are painting a very disturbing picture of the alleged events. Roger Gorley was handcuffed and forcibly removed from Research Medical Center in Kansas City, Mo., on Tuesday after he refused to leave his partner, Allen, who was receiving treatment for severe depression. Roger told Fox station WDAF that the hospital is guilty of discrimination. However, Research Medical Center denies the accusation, saying Roger was "disruptive and belligerent" and had to be escorted from the premises, according to a statement obtained by The Huffington Post.