New Zealand (Māori) Pioneer Battalion. Increasing casualties among the Anzac forces during the Gallipoli campaign led to the deployment of the 461 man battalion. 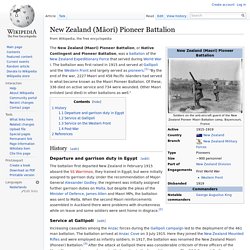 The battalion arrived at Anzac Cove on 3 July 1915. Here they joined the New Zealand Mounted Rifles and were employed as infantry soldiers. Māori objection - Conscientious objection. Native Contingent At the outbreak of war imperial policy did not allow 'native peoples' to fight in a war among Europeans. 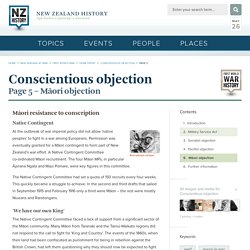 Permission was eventually granted for a Māori contingent to form part of New Zealand's war effort. A Native Contingent Committee co-ordinated Māori recruitment. The four Māori MPs, in particular Āpirana Ngata and Maui Pomare, were key figures in this committee. The Native Contingent Committee had set a quota of 150 recruits every four weeks. 'We have our own King' NZ Folk Song * Maori Battalion. Corporal Anania Amohau began composing the words for Maori Battalion while he was in Rotorua in late 1939. 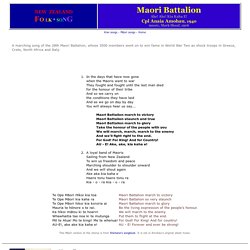 He was the grandson of prominent Te Arawa leader Te Kiwi Henare Mete Te Amohau and his wife, Tukau Te Hira of Ngati Pikiao. Their eldest son, Taiamai Te Amohau, was Anania's father, and their youngest child, Rotorua Guide Mere Taiamai Amohau (1895-1964) was Anania's aunt. Anania had two sisters, Pipiana Tamehana and Maramena Rauhina. When the returning Battalion landed on Wellington wharf in 1946, it was Sergeant Major Anania Amohau, an original member of the battalion, who pranced and leapt towards Colonel Henare to re-enact the ancient ceremony of the wero, in order to pay repect to their reputation as warriors of high renown.

Anania married June, and in 1959 was teaching concert items to the ŒWaihenga Maori Club¹ at Martinborough. As a young woman, Mere embarked on her musical career in 1915 in Bennett's Maori Opera Company. Maori soldiers' WW1 stories pieced together. A Maori historian is trying to piece together the stories of Maori soldiers who served in WWI as their accounts have not been thoroughly recorded. 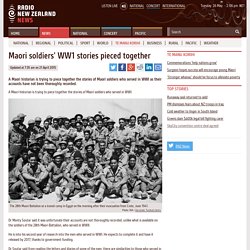 World War I - Museum of New Zealand Te Papa Tongarewa. Most New Zealanders eagerly supported ‘mother country’ Britain in World War I, but not without a cost. 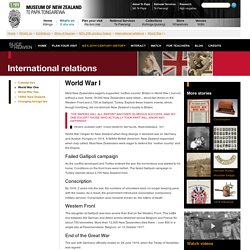 Some 18,000 New Zealanders were killed – about two thirds on the Western Front and 2,700 at Gallipoli, Turkey. Explore these historic events, which, though horrifying, did not diminish New Zealand’s loyalty to Britain. ‘The papers will all report another glorious success, and no one except those who actually took part will know any different.’ Private Leonard Hart, Otago Infantry Battalion, Passchendaele, 1917 World War I began for New Zealand when King George V declared war on Germany and Austria–Hungary in 1914. NZ Battlefield & Remembrance Tours New Zealand Forces: World War 1: France, Belgium, Western Front: 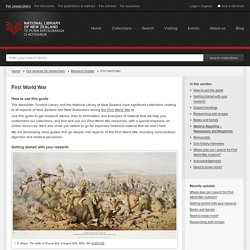 Use this guide to get research advice, links to information and examples of material that will help you understand our collections, and find and use our First World War resources, with a special emphasis on online resources. We’ll also show you where to go for important historical material that we don’t hold. We are developing more guides that go deeper into aspects of the First World War, including conscientious objection and medical personnel. Getting started with your research I. You’ve taken the first step in your research by coming to the Library! What was the war called? The multi-lateral war of 1914-1918 has had several different names, and knowing them can help your research, especially with finding older (contemporaneous) resources. 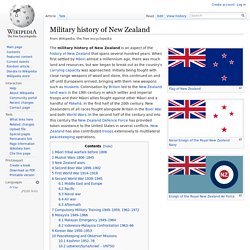 When first settled by Māori almost a millennium ago, there was much land and resources, but war began to break out as the country's carrying capacity was approached. Initially being fought with close range weapons of wood and stone, this continued on and off until Europeans arrived, bringing with them new weapons such as muskets. Colonisation by Britain led to the New Zealand land wars in the 19th century in which settler and imperial troops and their Māori allies fought against other Māori and a handful of Pākehā. – Ngā pakanga ki tāwāhi – Māori and overseas wars. The Native Contingent at Gallipoli The first Māori unit in the First World War, known as the Native Contingent, had Māori junior officers, but Pākehā filled the higher ranks. 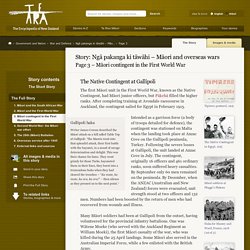 After completing training at Avondale racecourse in Auckland, the contingent sailed for Egypt in February 1915. Gallipoli haka Writer James Cowan described the Māori attack on a hill called Table Top at Gallipoli: ‘The Maoris went into that splendid attack, their first battle with the bayonet, in a mood of savage determination and delight. This was their chance for fame. Intended as a garrison force (a body of troops detailed for defence), the contingent was stationed on Malta when the landing took place at Anzac Cove on the Gallipoli peninsula, Turkey. Military history of New Zealand in World War I. New Zealand troops unloading at a French port in 1918 When the United Kingdom declared war on Germany at the start of the First World War, the New Zealand government followed without hesitation, despite its geographic isolation and small population. 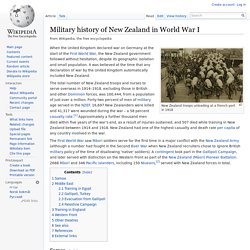 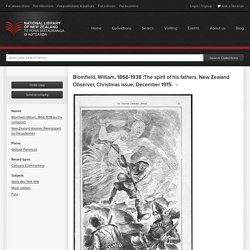 A Maori soldier charges two Turkish soldiers with a bayonet. The ghost of a Maori warrior wielding a patu rears behind him. Quantity: 1 photocopy/ies. Physical Description: A4 size photocopy Access restrictions: Not restricted Part of: Various artists :Collection of newspaper clippings, photocopies and bromides of cartoons by W. Format: Cartoons (Commentary), 1 photocopy/ies, Art works, A4 size photocopy See original record Purchasing this Item This item is available as a high resolution download. If this item has multiple pages, or is several items attached to a single record, you can use this form to order your copy. Using this Item You can copy this item for personal use, share it, and post it on a blog or website. Maori Units of the NZEF - Maori units of the NZEF.

Honouring tipuna who died in WWI. A respected Ngati Toa Rangatira member hopes his participation in Anzac Day commemorations will become a family tradition to honour the memory of tipuna who served during World War I. Maori Contingent soldiers at No 1 Outpost, Gallipoli, Turkey, 1915. Photo: Alexander Turnbull Library / Ref: 1/4-058101-F. Kahu Ropata is a direct descendant of the tribe's renowned chief Te Rauparaha, who composed the haka Ka Mate Ka Mate during his reign. It was used by soldiers who served in the Maori contingent during the war. Mr Ropata said three of his father's brothers served in that battle but only two of them returned home. To pay tribute to his great-uncle, who died at Gallipoli, he plans to participate in commemorations at Poupatate Marae in the Rangitikei district.

It is the first time he has taken part in the proceedings and he plans to wear medals belonging to his koro, Pahia Ropata, who never returned home and was not able to have children of his own. Related. WW100 New Zealand.