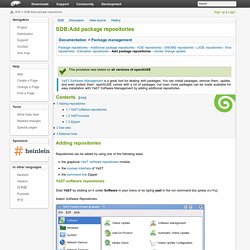 You can install packages, remove them, update, and even protect them. openSUSE comes with a lot of packages, but even more packages can be made available for easy installation with YaST Software Management by adding additional repositories. Adding repositories Repositories can be added by using one of the following ways: YaST software repositories Start YaST by clicking on it under Software in your menu or by typing yast in the run command box (press Alt+F2). Select Software Repositories. Click on Add, select Specify URL. Then enter a Repository Name and a URL. Package metadata will be downloaded and parsed - this takes time depending on mirror speed, your bandwidth, the size of the repository, the speed of your system. You can remove or disable repositories at any time.

Using Tumbleweed, the openSuSE rolling distribution. For the past several years, there have been two semi-official rolling release distributions for openSuSE Linux. 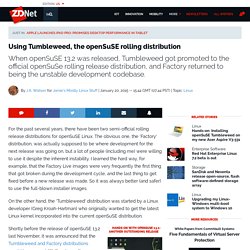 The obvious one, the 'Factory' distribution, was actually supposed to be where development for the next release was going on, but a lot of people (including me) were willing to use it despite the inherent instability. I learned the hard way, for example, that the Factory Live images were very frequently the first thing that got broken during the development cycle, and the last thing to get fixed before a new release was made. How to move to openSUSE Tumbleweed. Last year, openSUSE made a brave and smart move by merging Factory and Tumbleweed to create an independent, rolling release of openSUSE. 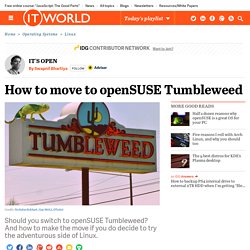 That move brought the best of two worlds together: A mature, 'enterprise-grade' OS and the flexibility of rolling release. As you may know, openSUSE is the community version of SUSE Enterprise Linux; so those planning to deploy SEL on their servers may want to hone their skills on openSUSE. Why rolling release? I am a huge fan of rolling release because I don't want to have to think about 'upgrading' the system.

I have more important things to do than formatting hard drives and reinstalling OSes. I have been using Arch Linux for almost four years now and I don't remember the last time I had to worry about 'upgrading' the system. But won't point-release be safer? Look at Google Chrome. I don't recall any of the major apps ever breaking on Arch Linux either. OpenSUSE:Leap. This page tracks the status of the discussion about the openSUSE distribution based on SUSE Linux Enterprise sources. 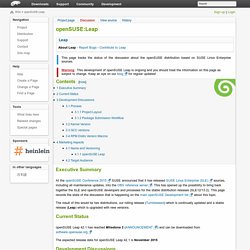 Warning This development of openSUSE Leap is ongoing and you should treat the information on this page as subject to change. Keep an eye on our blog for regular updates! Executive Summary At the openSUSE Conference 2015 SUSE announced that it has released SUSE Linux Enterprise (SLE) sources, including all maintenance updates, into the OBS reference server. This has opened up the possibility to bring back together the SLE and openSUSE developers and processes for the stable distribution releases (SLE12/13.2). The result of this would be two distributions, our rolling release (Tumbleweed) which is continually updated and a stable release (Leap) which is upgraded with new versions. Current Status. Tumbleweed installation. OpenSUSE Tumbleweed can be installed either by downloading and launching an installation image to start from scratch or by upgrading from a stable release. 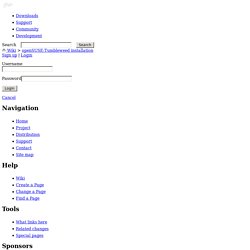 Installation To install openSUSE Tumbleweed download the latest Tumbleweed ISO below, verify the download, burn it on a DVD or write it to a USB stick with ImageWriter and launch the installation from there after a reboot. To verify the signature, download the .sha256 file and run gpg --verify on it. The file must be signed by opensuse@opensuse.org with fingerprint 22C0 7BA5 3417 8CD0 2EFE 22AA B88B 2FD4 3DBD C284. Then run sha256sum --check on the sha256 file to make sure the iso is intact. Installation ISOs – Recommended for Installation & Upgrades Please use the DVD if you want to upgrade an existing installation! Things to do after installing openSUSE. Additional package repositories. This is a list of currently existing third-party repositories, meaning they're external to openSUSE. 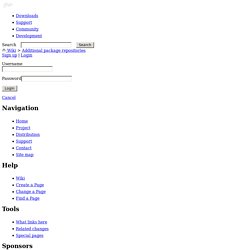 For new Linux and openSUSE users it is recommended to use the 4 default repositories (OSS, Non-OSS, Update, Update-Non-OSS) and Packman. Later on when you familiarize yourself with package management you can add more. Warning Use it at your own risk. Popular external repositories Packman Packman offers various additional packages for openSUSE, especially but not limited to multimedia related applications and libraries. A list of repository mirrors is available on the Packman site.