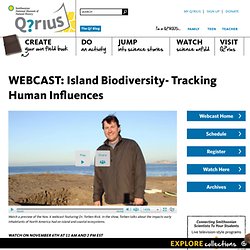 Torben Rick, an archaeologist at the National Museum of Natural History. Join him in analyzing archaeological evidence of human life on islands. Look back over thousands of years of influence of humans on the West Coast (Channel Islands) and East Coast (Chesapeake Bay). How do you participate in the webcast? 1. 2. 3. 4. 5. 6. The Island Biodiversity resources align with the following middle school NGSS Performance Expectations that integrate science concepts with science practice skills MS-ESS3 Earth and Human Activity MS-ESS3-3 Apply scientific principles to design a method for monitoring and minimizing a human impact on the environment.MS-ESS3-4 Construct an argument supported by evidence for how increases in human population and per-capita consumption of natural resources impact Earth's systems. MS-LS2 Ecosystems: Interactions, Energy, and Dynamics.

Ohioscience. The Case for Wildlife Education in Ohio's New Science Standards. Are you freaking out yet about the new Science standards!

It's getting close to the beginning of the school year and our phones are beginning to ring. Teachers are starting to shake off the summer haze and beginning to look at what they're going to have to teach this coming school year. While some districts have already begun to implement the new standards, some are beginning this year and it's creating a bit of a panic for many. Soils in 6th grade?!!! I've never taught this concept in 4th grade before! We're here to help! Project WILD/Aquatic WILD--This supplemental curriculum is mentioned throughout the Model Curriculum as a great resource for helping to develop those project-based learning experiences that you'll be seeing more of in the new curriculum. 3rd Grade Life Science Content Statement: Offspring resemble their parents and each other.Aquatic Project WILD has an activity called Are You Me?

Enjoy the last weeks of summer and have an even better school year! Green Energy: Can We Save the Planet and Save Birds? Wildlife-smart wind power may be as close as it gets to "green energy. 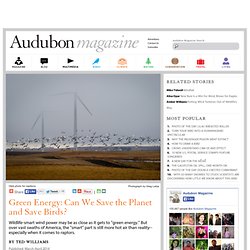 " But over vast swaths of America, the "smart" part is still more hot air than reality--especially when it comes to raptors. By Ted Williams Published: March-April 2014 "All wind projects, no matter where they are, kill birds. The questions become how many, what kinds, and is the mortality 'acceptable'? "

Summer academy. Animations. Allen Hoe served as a combat medic during the Vietnam War, and his two sons continued his legacy of service. 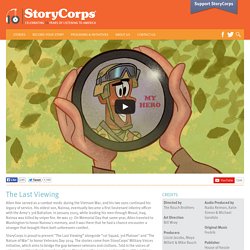 His oldest son, Nainoa, eventually became a first lieutenant infantry officer with the Army's 3rd Battalion. In January 2005, while leading his men through Mosul, Iraq, Nainoa was killed by sniper fire. He was 27. On Memorial Day that same year, Allen traveled to Washington to honor Nainoa's memory, and it was there that he had a chance encounter a stranger that brought them both unforeseen comfort. StoryCorps is proud to present "The Last Viewing” alongside “1st Squad, 3rd Platoon" and "The Nature of War" to honor Veterans Day 2014.

Funding Provided By. Why Some Civil War Soldiers Glowed in the Dark. By the spring of 1862, a year into the American Civil War, Major General Ulysses S. Grant had pushed deep into Confederate territory along the Tennessee River. In early April, he was camped at Pittsburg Landing, near Shiloh, Tennessee, waiting for Maj. Gen. Don Carlos Buell’s army to meet up with him.

On the morning of April 6, Confederate troops based out of nearby Corinth, Mississippi, launched a surprise offensive against Grant’s troops, hoping to defeat them before the second army arrived. The Union troops began forcing the Confederates back, and while a counterattack stopped their advance it did not break their line. All told, the fighting at the Battle of Shiloh left more than 16,000 soldiers wounded and more 3,000 dead, and neither federal or Confederate medics were prepared for the carnage. The bullet and bayonet wounds were bad enough on their own, but soldiers of the era were also prone to infections. A Bright Spot And that’s just what Bill did. A Good Light. Welcome to Science Class. PearlTrees 101 Click this star.