The Battle of Passchendaele. “I died in hell – they called it Passchendaele” – A century on, Passchendaele is commemorated through the words of poet Siegfried Sassoon. 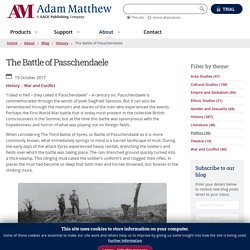 Sir John Monash Centre. The Western Front. Counting the cost of Passchendaele. In terms of lives lost in a single day, 12 October 1917 ranks as the most catastrophic in the country’s post-1840 history. 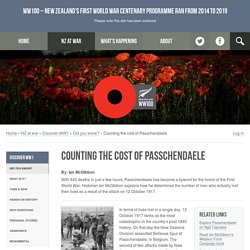 On that day the New Zealand Division assaulted Bellevue Spur at Passchendaele, in Belgium. The second of two attacks made by New Zealand troops during the Third Battle of Ypres, it was a disastrous fiasco. During the First World War determining exact casualty figures, especially those occurring in major battles, was usually very difficult. Unit war diarists often had no knowledge of the fate of men who went forward during attacks but did not answer roll calls afterwards. Men listed as missing were sometimes being treated in medical facilities, which were not necessarily New Zealand ambulance units.

For these reasons casualty figures given in war diaries are often inaccurate, and this was reflected in histories written soon after the conflict. Passchendaele letter Leonard Hart. Canada and the First World War. Passchendaele Second YpresFestubertSt. 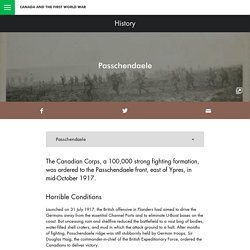 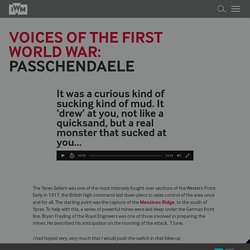 The whole operation was a stunning success. But it was not capitalised upon, and the Germans were able to regroup. The next stage of the attack began on 31 July. After a two week bombardment of German lines, the British attacked near Pilckem. British officer Ulrick Burke recalled the morning of the battle. Immediately the daylight came, they had their rum ration. Clifford Lane of the Hertfordshire Regiment was one of those who advanced on the German lines that day. At dawn in the morning about, we were told, 800 guns opened up and we went over the top. The British made significant gains on 31 July, despite attacking in increasingly heavy rain and meeting with determined German resistance. As we got up from the canal bank to make our advance, we went through some light 18 pounders on the way up over the ridge.

Unseasonal, heavy and persistent wet weather forced a temporary halt to operations around Ypres. It was a dreadful experience. Historian Paul Ham and the bloody futility of WWI's Battle of Passchendaele - Conversations - ABC Radio. Sources for the Battle. Source 2: after-action report Lieutenant Colonel Donald Cameron was the Commanding Officer of the 12th Australian Light Horse Regiment. 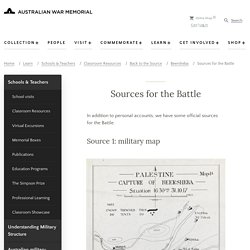 After the battle of Beersheba on 31 October 1917 he wrote his after-action report, extracts of which are transcribed below. You might find this account more meaningful if you can refer to the military map above. 12th Australian Light Horse Regiment Beersheba Post-Battle Report 31 October 1917. Chapter XXI – The Plan Breaks Down. Passchendaele I – October 9th: First World War Official Histories - Volume IV – The Australian Imperial Force in France, 1917 (11th edition, 1941) 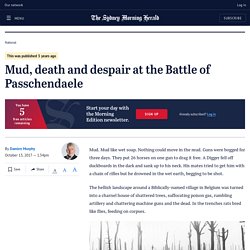 "Most [were] desperately mutilated without legs, arms, and heads and half covered in mud and slime and under a questionable sheltered bank lay a group of dead men and sitting by them in little scooped out recesses sat a few living but so emaciated by fatigue and shell shock you couldn't tell the differences," Hurley wrote. The Australian War Memorial's recollections include those of one exhausted British soldier who slithered into a pill box for safety at Passchendaele and fell asleep against a dead German. They capture horror and nonchalant heroism: "Next day I was awoken by a voice, 'You the Lancashire Fusiliers? Well piss off. Papers relating to Albany Thomas Fredrick Varney, 1915-2011. Papers relating to the First World War service of 887 Private Albany Thomas Fredrick Varney, 12th Light Horse Regiment. 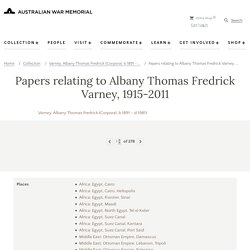 This is an extensive collection of letters, postcards and other documents that spans the period from Varney's enlistment with 12th Light Horse Regiment and his subsequent embarkation and service, to his eventual return to Australia, discharge and later life. Varney documents his training and selection in Sydney, his journey overseas, and transfer to Gallipoli. Typescript of diaries of Henry 'Harry' Langtip, 1916-1918. Trooper Sloan ‘Scotty’ Bolton, DCM - ANZAC Day Commemoration Committee. Adapted from a story by Darryl Kelly in Just Soldiers. 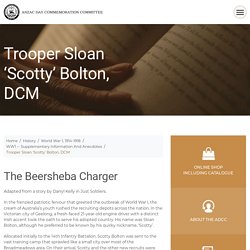 In the frenzied patriotic fervour that greeted the outbreak of World War I, the cream of Australia’s youth rushed the recruiting depots across the nation. In the Victorian city of Geelong, a fresh-faced 21-year-old engine driver with a distinct Irish accent took the oath to serve his adopted country. His name was Sloan Bolton, although he preferred to be known by his quirky nickname, ‘Scotty’.

Allocated initially to the 14th Infantry Battalion, Scotty Bolton was sent to the vast training camp that sprawled like a small city over most of the Broadmeadows area. On their arrival, Scotty and the other new recruits were tasked to rig their tents. The Horses Stay Behind. Page 10 Soon we will be tracking down the Indian Ocean, bound for home. 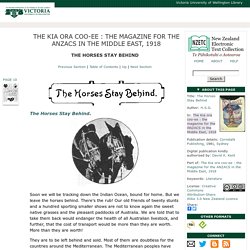 But we leave the horses behind. There's the rub! Edward Cleaver died from wounds at the charge of Beersheba 31 October 1917. Edward Randolph Cleaver joined the 4th Australian Light Horse Regiment in August 1914. 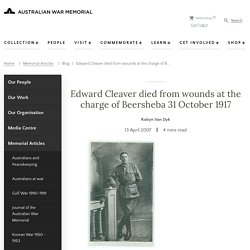 He was the first man from Sale, Victoria to enlist. He was 29 years of age and a master butcher by trade. He had been a member of the 10th Australian Light Horse since 1910. On the 1 November 1914, after a couple of months of training at Broadmeadows, he set sail from Albany in Western Australia on the HMAT Wiltshire arriving in Alexandria, Egypt on 11 December 1914. HMAT Wiltshire was one of the ships of the First Contingent to carry Australian and New Zealand forces to Europe. Thirty six hours outside of the Cocos Islands a signal was received from the Cocos Station “S.O.S. strange warship approaching”. Trooper Cleaver with his Regiment saw service at Gallipoli. These photographs that were sent home by Cleaver show his life in the desert. The Battle of Beersheba Palestine, 31 October 1917 Sydney Mail Account Australian Light Horse Studies Centre.