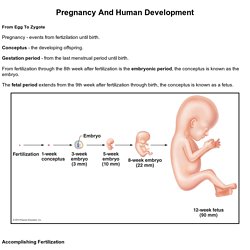 Conceptus - the developing offspring. Gestation period - from the last menstrual period until birth. From fertilization through the 8th week after fertilization is the embryonic period, the conceptus is known as the embryo. The fetal period extends from the 9th week after fertilization through birth, the conceptus is known as a fetus. Accomplishing Fertilization Fertilization occurs when a sperm fuses with an egg to form a zygote. Sperm Transport and Capacitation Millions of sperm ejaculated into the female reproductive tract are lost due to leakage from the vaginal canal, destruction by the acidic environment of the vagina, inability to pass the cervical mucus, or destruction by defense cells of the uterus. Hundreds of sperm cells must release their acrosomal enzymes before fertilization can occur. Events of Embryonic Development: Zygote to Blastocyst Implantation Implantation Placentation.

How an embryo turns into a baby, in one hypnotic GIF. You were once a single-celled zygote — a microscopic blob of tissue. 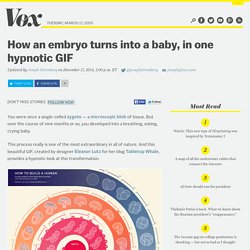 But over the course of nine months or so, you developed into a breathing, eating, crying baby. This process really is one of the most extraordinary in all of nature. And this beautiful GIF, created by designer Eleanor Lutz for her blog Tabletop Whale, provides a hypnotic look at this transformation. (Eleanor Lutz) Watch a single embryo move through the spiral over time. Next, inside the ectoderm, the mesoderm (shown in pink) develops — a middle layer of tissue that becomes the body's connective tissue, the lining between various body cavities, and the muscles. Finally, inside the mesoderm, cells divide to form the endoderm, shown in orange — an innermost tube of tissue that eventually grows into most of the infant's inner organs. MayoClinic.com Health Library - Fetal development: The first trimester. You're pregnant. 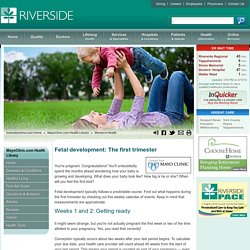 Congratulations! You'll undoubtedly spend the months ahead wondering how your baby is growing and developing. What does your baby look like? How big is he or she? When will you feel the first kick? Fetal development typically follows a predictable course. Implantation-6-travel.jpg (JPEG Image, 500 × 396 pixels) 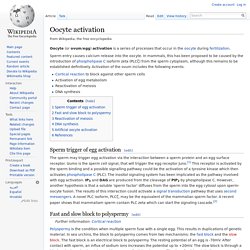 Sperm entry causes calcium release into the oocyte. In mammals, this has been proposed to be caused by the introduction of phospholipase C isoform zeta (PLCζ) from the sperm cytoplasm, although this remains to be established definitively. Activation of the ovum includes the following events: Cortical reaction to block against other sperm cellsActivation of egg metabolismReactivation of meiosisDNA synthesis Sperm trigger of egg activation[edit] The sperm may trigger egg activation via the interaction between a sperm protein and an egg surface receptor. Fast and slow block to polyspermy[edit] Polyspermy is the condition when multiple sperm fuse with a single egg. Reactivation of meiosis[edit] The Activation of Egg Metabolism - Developmental Biology - NCBI Bookshelf. Structure of the Gametes - Developmental Biology - NCBI Bookshelf.