A Guide to Protecting Yourself From Online Harassment. The Transcontinental Disability Choir: How to make your blog accessible in five not-very-complicated steps. I love blogs. 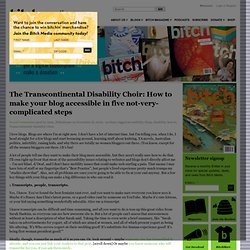 Blogs are where I'm at right now. I don't have a lot of internet time, but I'm telling you, when I do, I head straight for a few blogs and start bouncing around, learning stuff about knitting, YA novels, Australian politics, infertility, raising kids, and why there are totally no women bloggers out there. (You know, except for all the women bloggers out there.) It's fun! A lot of people tell me they want to make their blog more accessible, but they aren't really sure how to do that. 1.Transcripts, people, transcripts. Yes, I know. I know transcripts can be difficult and time consuming, and all you want to do is toss up this great video from Sarah Haskins, so everyone can see how awesome she is. Ideally, though, transcribe as much of it as you can. 2. There is a description of this picture in the alt-text.

If you hover you mouse over, you'll see it, because I also included it in the title text. Some people put their descriptions in a caption to the photo. 3. What's "here"? Trans*H4ck 1.0 – Trans* coders make (their own) history. This is a guest post by Naomi Ceder, who has been active in the Linux and Python communities since… well… for a long time. 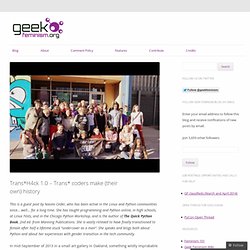 She has taught programming and Python online, in high schools, at Linux Fests, and in the Chicago Python Workshop, and is the author of The Quick Python Book, 2nd ed. from Manning Publications. She is vastly relieved to have finally transitioned to female after half a lifetime stuck “undercover as a man”. She speaks and blogs both about Python and about her experiences with gender transition in the tech community. In mid-September of 2013 in a small art gallery in Oakland, something wildly improbable (to say the least) happened. Some 40 people – trans*, gender variant, queer, cisgender – came together for Trans*H4ck, the very first hackathon dedicated to helping the trans* community.

[Author's note: trans* is used with the intention of including gender variant and gender queer. TransHack banner On the evening of September 13, under the leadership and vision of Dr. Mserikajahn : 10 Ways My Social Media Job... Future of Feminism: The Hashtag Is Mightier Than the Sword. Twenty years ago, feminist activism might have meant writing a letter to your congress(wo)man or picking up a pen to sign a petition. 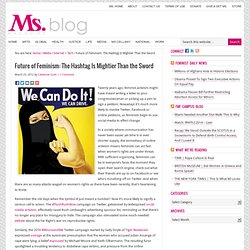 Nowadays it’s much more likely to involve Twitter, Facebook or online petitions, as feminists begin to use social media to effect change. In a society where communication has never been easier yet time is in ever shorter supply, the immediacy of online activism means feminists can act fast when women’s rights are under threat. With sufficient organizing, feminism can be in everyone’s faces the moment they open their search engine, check out what their friends are up to on Facebook or see who’s mouthing off on Twitter. And when there are as many attacks waged on women’s rights as there have been recently, that’s heartening to know.

Remember the old days when the symbol # just meant a number? When it was revealed that the Susan G. YouTube may be great for watching cats behave comically, but it has also became the platform for acts of political bravery. Pinterest and Feminism. On constructing a lesson plan to teach Pinterest and feminism I teach sociology; usually theoretical and centered on identity. 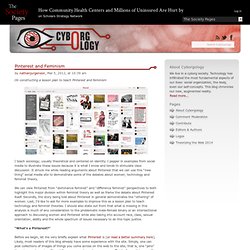 I pepper in examples from social media to illustrate these issues because it is what I know and tends to stimulate class discussion. It struck me while reading arguments about Pinterest that we can use this “new thing” social media site to demonstrate some of the debates about women, technology and feminist theory. We can view Pinterest from “dominance feminist” and “difference feminist” perspectives to both highlight this major division within feminist theory as well as frame the debate about Pinterest itself. Secondly, the story being told about Pinterest in general demonstrates the “othering” of women. “What’s a Pinterest?” Before we begin, let me very briefly explain what Pinterest is [or read a better summary here]. The site has taken off, driving more customers to retail sites than “Google+, YouTube and LinkedIn combined.”