How did pink become a girly color? The Silliest Pink Crap Money Can Buy, None of Which Will Cure Breast Cancer. You guys, I am fucking aware as a rabbit in an open field at night near some owl nests of breast cancer. 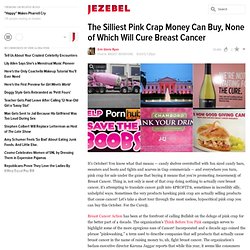 That will not stop me, my mom, my friend, or you from developing breast cancer. Awareness raising is absolutely important, and absolutely needed to be done. But we're aware. It's time to move on, and target awareness raising at underserved populations, or those least likely to seek care, instead of these stupid general public campaigns targeting people who are already aware.

I would love to see the money raised by pink water bottles be used to reach out to immigrant communities, poor communities, or those who historically demonstrate poor care-seeking behavior. Pink and princesses: Why does "girly" equal "lame"? When my oldest son was 4, I took him to a princess-themed birthday party. 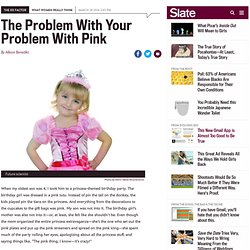 The birthday girl was dressed in a pink tutu. Instead of pin the tail on the donkey, the kids played pin the tiara on the princess. And everything from the decorations to the cupcakes to the gift bags was pink. My son was not into it. Rethinking Pink. Every week there seems to be a new story about how offended we should be about a new product marketed especially to women. 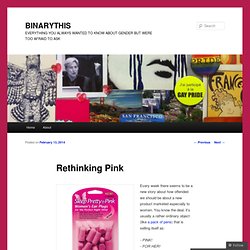 You know the deal, it’s usually a rather ordinary object (like a pack of pens) that is selling itself as: And of course, this is deeply annoying. It seems to reinforce the idea of woman as the “marked” gender and man as the “normal”, natural state of things. Elasticitymudflap: ericaisawesome56: ... The Trouble with GoldieBlox. Over the last few days, a little video from a company called GoldieBlox has gone viral, with headlines such as: “This Awesome Ad, Set to the Beastie Boys, Is How to Get Girls to Become Engineers” (this particular headline via Slate). 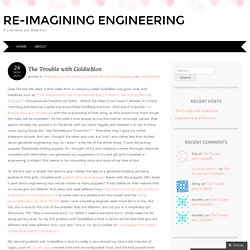 Watch the video if you haven’t already: it’s utterly charming and features a quite impressive Rube Goldberg machine. (And watch it quickly: the Beastie Boys are not amused with the re-purposing of their song, so who knows how much longer the video will be available!) As the video’s viral spread across the internet continued, person after person emailed me, posted it on Facebook with my name tagged, and tweeted it at me, in many cases saying things like “Hey Michelle you’ll love this!” * Time after time, I gave my rather lukewarm answer, that yes I thought the video was cool, but that I was rather less than thrilled about gendered engineering toys, so I wasn’t a big fan of the whole thing. It was like kicking puppies. Le marketing rose: une stratégie à double tranchant. Au département de la chasse de SAIL et de Latulippe, dans le rayon des armes, un intrus accroche le regard. 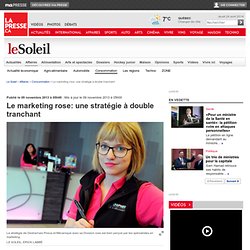 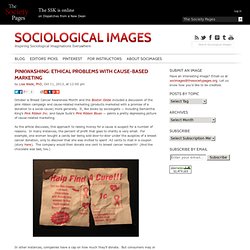 It, like books by sociologists — including Samantha King’s Pink Ribbon Inc. and Gayle Sulik’s Pink Ribbon Blues — paints a pretty depressing picture of cause-related marketing. As the article discusses, this approach to raising money for a cause is suspect for a number of reasons. In many instances, the percent of profit that goes to charity is very small. For example, one woman bought a candy bar being sold door-to-door under the auspices of a breast cancer donation, only to discover that she was invited to spent .42 cents to mail in a coupon (story here). The company would then donate one cent to breast cancer research! The Class Connotations of the Color Pink. Pink, as we all know, is all about gender – it’s for girls. 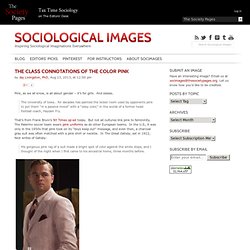 And sissies. The University of Iowa… for decades has painted the locker room used by opponents pink to put them “in a passive mood” with a “sissy color,” in the words of a former head football coach, Hayden Fry. That’s from Frank Bruni’s NY Times op-ed today. But not all cultures link pink to femininity. The Palermo soccer team wears pink uniforms as do other European teams. His gorgeous pink rag of a suit made a bright spot of color against the white steps, and I thought of the night when I first came to his ancestral home, three months before.

In the previous chapter, Tom Buchanan says that he has been “making a small investigation” of Gatsby’s past. “And you found he was an Oxford man,” said Jordan helpfully. “An Oxford man!” Gatsby’s choice of suit colors reveals not his sexuality but his class origins. According to an interview with the costume designer for Baz Luhrmann’s recent film, the color had working-class connotations. What the Pink? Breast Cancer-Related Makeup Products. For Breast Cancer Awareness Month, the Ms. blog will be running a series of pieces devoted to the disease and activism around it. 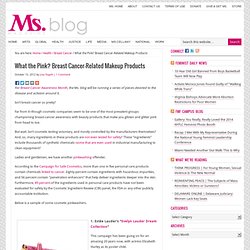 Isn’t breast cancer so pretty? Far from it–though cosmetic companies seem to be one of the most prevalent groups championing breast-cancer awareness with beauty products that make you glisten and glitter pink from head to toe. But wait. Isn’t cosmetic testing voluntary, and mostly controlled by the manufacturers themselves? The Problem with Pink. Breast cancer awareness efforts have been wildly successful in one way and, research suggests, a great failure in another. 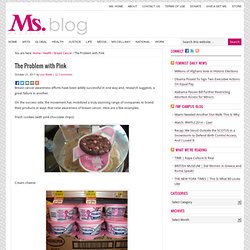 On the success side, the movement has mobilized a truly stunning range of companies to brand their products in ways that raise awareness of breast cancer. Here are a few examples. When did pink become a girl color? - Gender Mystique.