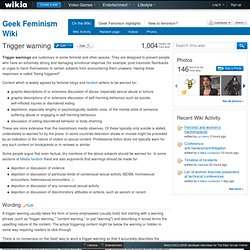 They are designed to prevent people who have an extremely strong and damaging emotional response (for example, post-traumatic flashbacks or urges to harm themselves) to certain subjects from encountering them unaware. Having these responses is called "being triggered". Content which is widely agreed by feminist blogs and fandom writers to be warned for: graphic descriptions of or extensive discussion of abuse, especially sexual abuse or torture graphic descriptions of or extensive discussion of self-harming behaviour such as suicide, self-inflicted injuries or disordered eating depictions, especially lengthy or psychologically realistic ones, of the mental state of someone suffering abuse or engaging in self-harming behaviour discussion of eating-disordered behavior or body shaming These are more extensive than the mainstream media observes. Wording Edit Other communities Further reading. 18 Ways To Make Sure Your Child's A Feminist. Bustle. As bell hooks once wrote, feminism is for everybody. 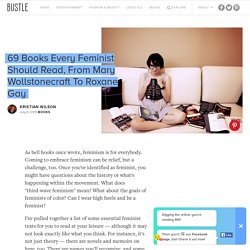 Coming to embrace feminism can be relief, but a challenge, too. Once you've identified as feminist, you might have questions about the history or what's happening within the movement. What does "third-wave feminism" mean? What about the goals of feminists of color? Can I wear high heels and be a feminist? I've pulled together a list of some essential feminist texts for you to read at your leisure — although it may not look exactly like what you think. And, of course, this list is long, but it isn't exhaustive by any means.

Here's my hope, though: All feminists will see themselves somewhere in these selected texts. Image: Fe Ilya/Flickr 'The Camera My Mother Gave Me' by Susanna Kaysen One day, having previously enjoyed a healthy sex life, Susanna Kaysen’s vagina began to hurt. 'Assata: An Autobiography' by Assata Shakur 'The Joy Luck Club' by Amy Tan 'Spinster' by Kate Bolick 'Yes Please' by Amy Poehler. No, We Won't Calm Down – Tone Policing Is Just Another Way to Protect Privilege. 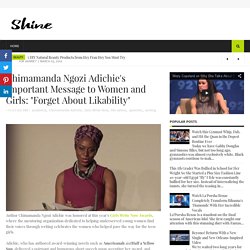 Adichie, who has authored award-winning novels such as Americanah andHalf a Yellow Sun, delivered a poignant and humorous short speech upon accepting her award, and imparted key words of wisdom on finding your voice as a young female writer. "I think it's important to tell your story truthfully, and I think that's a difficult thing to do--to be truly truthful. Because it's only natural to be concerned about offending people or possible consequences," Adichie says in the speech. The writer goes on to share the advice she gives her young students, especially the girls, to "forget about likability. " "That is bullshit," she says, to loud applause.

Take a look at the speech below: Photo: YouTube.