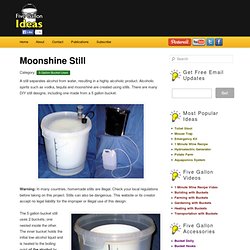 Alcoholic spirits such as vodka, tequila and moonshine are created using stills. There are many DIY still designs, including one made from a 5 gallon bucket. Warning: In many countries, homemade stills are illegal. Check your local regulations before taking on this project. Stills can also be dangerous. The 5 gallon bucket still uses 2 buckets, one nested inside the other. The alcohol evaporates and condenses on the top and side of the bucket. Some amateur brewers use simple stills like this one to produce fuel for their gasoline cars, which is legal if properly licensed. The full instructions for making the 5 gallon bucket still can be found on Prepper Ideas. Peanut Butter Recipes. I love Peanut Butter! 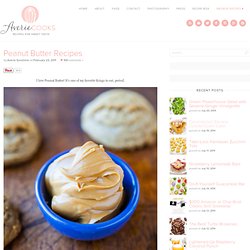 Homemade Peanut Butter. Once you make peanut butter at home, it will be very difficult to get excited about storebought peanut butter ever again. 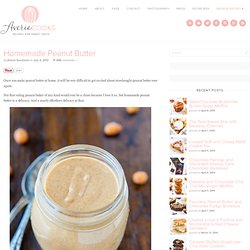 Not that eating peanut butter of any kind would ever be a chore because I love it so, but homemade peanut butter is a delicacy. And a nearly effortless delicacy at that. It’s akin to savoring a piece of high-end dark chocolate that’s rich and pure, uncomplicated by fillers, additives, or ingredients that have no place being in chocolate; and then grabbing a milk chocolate bar in the checkout line at the grocery store, which is likely a combination of tasteless, grainy, and waxy. Apples and oranges. Store-bought peanut butter versus homemade. Once you have something amazing, it’s hard to get excited about any less than. Bourbon Maple Slow Cooker Baked Beans. Bourbon Maple Slow Cooker Baked Beans I had a craving for baked beans that hit me like a ton of bricks over Memorial Day Weekend. 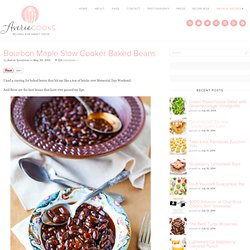 And these are the best beans that have ever passed my lips. I was walking around my San Diego neighborhood, and the smells from neighborhood cookouts were wafting through the air, music was playing, people were laughing with beer bottles clanking, and the early summer evenings that stay light until 8pm reminded me of my childhood summers. Because I grew up in Minnesota, summer was painfully short and each day was cherished.

It meant as much time outdoors as possible and cookouts and grilling were an integral part. Baked beans were always served at picnics and barbeques, and since I was never a meat eater, I made meals out of baked beans, corn on the cob, watermelon, and white grocery store-bakery sheet cakes. It’s funny how certain smells set off my cascade of memories, and I had to make baked beans. This is an easy and nearly work-free recipe. 16 Hours Later. Soft Batch Dark Brown Sugar Coconut Oil Cookies. Soft Batch Dark Brown Sugar Coconut Oil Cookies No butter, no white sugar, no complaints. 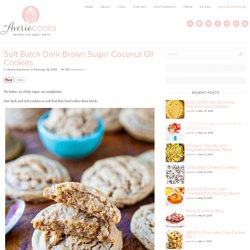 Just dark and rich cookies so soft that they bend rather than break. Growing up I loved Soft Batch Cookies. Although there was never a shortage of homemade cookies around, something about those uber-soft storebought cookies, almost flexible and pliable they’re so soft, was something I’d pester my mom to buy. These cookies are my ode to Soft Batch cookies, using a more robust flavor palette. I tried to convey in the Coconut Oil White Chocolate Cookies recipe that the coconut oil doesn’t make the cookies taste like tanning lotion. Interestingly, I’ve found when baking with coconut oil that the smell is more pronounced than the actual flavor. I’ve been craving molasses cookies and rather than being seasonally inappropriate with a straight up molasses cookie in the almost springtime, I allowed the natural molasses undertones in dark brown sugar to work for me.