Dead and Alive Chapter 1, a sookie stackhouse/southern vampire mysteries fanfic. Dead and Alive A/N: I don't own the Southern Vampire Mysteries or any of the characters. 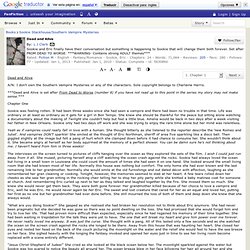 Sole copyright belongs to Charlaine Harris. ***Dead and Alive is set after From Dead to Worse (number 8) if you have not read up to this point in the series my story may not make sense. What Lurks Beneath Chapter 1: The Vampire, a true blood fanfic. I own nothing to do with SVM or True Blood. 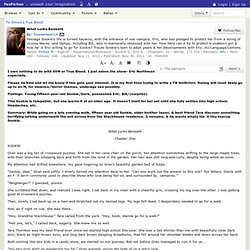 I just adore the show- Eric Northman especially. Please be kind and let me know if this gets your interest. It is my first time trying to write a TB fanfiction. Rating will most likely go up to an M, for violence/horror themes, underage sex possibly. Pairings: Young Fifteen-year-old Sookie/Dark, possessive Eric. This Sookie is telepathic, but she learns it at an older age. Summary: While going on a late evening walk, fifteen year old Sookie, older brother Jason, & best friend Tara discover something terrifying lurking underneath the soil across from the Stackhouse residence. At Second Glance Chapter 1, a true blood fanfic. Authors note: Okay this is kindof an experiment piece, just playing around with this fiction to see where they go. 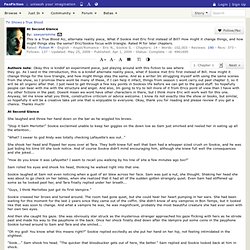 As I said in the introduction, this is a kindof alternate reality piece, what if Sookie met Eric first instead of Bill. How might it change things for the love triangle, and how might things stay the same. And as a writer Im struggling myself with using the same scenes from the show, so I promise there wont be many of these, if I can help it infact, things from season 1 wont carry out past chapter 3, so it will be all organic after that. I just need to get through a few key points in Sookies life before we can get to the good stuff. So hopefully people can bear with me with the structure and angst. At Second Glance She laughed and threw her hand down on the bar as he wiggled his brows. "Stop it Sam Merlotte! " "What? She shook her head and flipped her eyes over at Tara. Binding Truth Chapter 1: Redefining Friendship, a true blood fanfic.

A/N: Seriously, I have no idea where this came from. 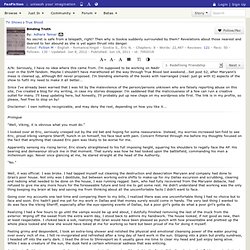 I'm supposed to be working on Nadir over in the SVM fandom. Maybe I shouldn't have marathoned all the way through True Blood last weekend...Set post S2, after Maryann's mess is cleaned up, although Bill never proposed. I'm blending elements of the books with rearranged (read: just go with it) aspects of the show to fulfil my need to make it all better... Since I've already been warned that I was hit by the malevolence of the person/persons unknown who are falsely reporting abuse on this site, I've created a blog for my writing, in case my stories disappear. I'm saddened that the maliciousness of a few can ruin a creative outlet for many. Disclaimer: I own nothing recognizable, and may deny the rest, depending on how you like it... Prologue. 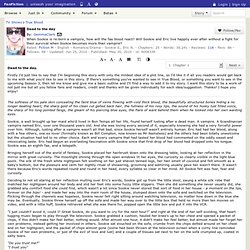 Firstly I'd just like to say that I'm beginning this story with only the mildest idea of a plot line, so I'd like it if all you readers would get back to me with what you'd like to see in this story. If there's something you've wanted to see in True Blood, or something you want to see in the upcoming Season 3, then let me know and give me a basic outline and I'll find a way to add it to my story. I want this story to be a work of not just me but all you fellow fans and readers, credit and thanks will be given individually for each idea/suggestion. Thanks! Thou Art to Me a Delicious Torment Chapter 9: No One, a true blood fanfic. Okay Barbados is coming next! 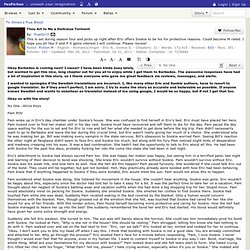 I swear! I have been kinda busy lately, but wanted to get this nice, long chapter out for you all to enjoy while I get them to Barbados. The awesome responses have had a lot of inspiration in this story, so I thank everyone who gave me great feedback via reviews, messages, and alerts. I wanted to apologize if the Swedish translations are incorrect. True Blood FanFiction Archive. Own Me Chapter 12, a true blood fanfic. AN: Sorry it took me so long to get this chapter done . 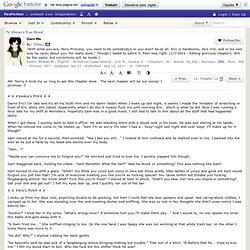 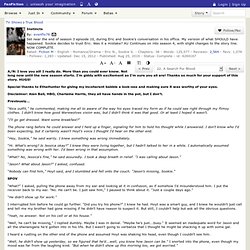 I really do. More than you could ever know. Not long now until the new season starts. Offers, a true blood fanfic. Title: Offers Author: California Kat Beta: None (So forgive my typos. 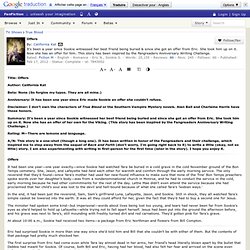 They are all mine.) Anniversary: It has been one year since Eric made Sookie an offer she couldn't refuse. Disclaimer: I don't own the characters of True Blood or the Southern Vampire Mystery novels. Sookie Rises Chapter 1, a true blood fanfic. Back and Forth Chapter 57: Protection, a true blood fanfic. Chapter 57: "Protection" Ten minutes later, Lafayette and Jesus entered the living room to see a resting Eric and Sookie on the couch. 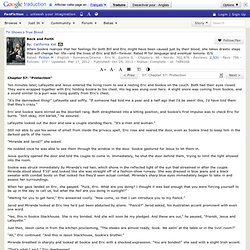 Both had their eyes closed. They were wrapped together with Eric holding Sookie to his chest. His leg was slung over hers. A slight snore was coming from Sookie, and a sound similar to a purr was rising quietly from Eric's chest. "It's the damnedest thing! " Eric and Sookie were stirred as the doorbell rang. Lafayette looked out the door and saw a couple standing there. Still not able to use his sense of smell from inside the privacy spell, Eric rose and neared the door, even as Sookie tried to keep him in the darkest parts of the room. "Miranda and Jarod? " He nodded once he was able to see them through the window in the door. Jesus quickly opened the door and told the couple to come in. Sookie was struck immediately by Miranda's red hair, which shone in the reflected light of the sun that streamed in after the couple.

One Night Real Soon Chapter 1, a true blood fanfic. Heavy music was pounding; the sound of it palpable. There was the tang of sex on the air, as there always was at Fangtasia. It was a busy night and the fang bangers were gathering en mass. The sweaty, nervous, excited energy that they gave off was permeating Eric's senses. He sat there, on his chair, overseeing the happenings of the club. His expression was one of disinterest; boredom even. Eric was fiddling with his mobile phone when he sensed her. She was standing near the entrance, nervously looking around her. She placed an order for a gin and tonic before standing with her back against the hard black wood of the bar.

Turning point Chapter 5, a true blood fanfic. "Hello, my child. " He purred, entering the clearing. I did not recognize him, but I felt cold chills running up and down my spine, filtering through the back of my mind. He was staring at me, his eyes black. It made me feel like I had no secrets, nothing was hidden. Eric snarled in front of me, and my eyes were ripped from the man's vision. The Maker's Secret Chapter 1, a true blood fanfic. This was written mainly in the early hours of the morning as I have insomnia. This mainly Pam/Eric story follows on a couple a months after the last episode of season 4. The idea of their relationship completely fascinates me so...