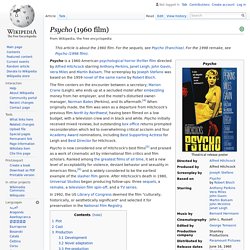 During a lunchtime tryst in Phoenix, Arizona, a real estate secretary named Marion Crane discusses with her boyfriend, Sam Loomis, how they cannot afford to get married because of Sam's debts. After lunch, Marion returns to work, where a client drops off a $40,000 cash payment on a property. Her boss asks her to deposit the money in the bank, and she asks if she can take the rest of the afternoon off. Returning home, she begins to pack for an unplanned trip, deciding to steal the money and give it to Sam in Fairvale, California. She is seen by her boss on her way out of town, which makes her nervous. A week later, Marion's sister Lila arrives in Fairvale and confronts Sam about the whereabouts of her sister. At the motel, Lila and Sam meet Norman. The shadowy figure from the shower scene. American Film Institute lists. The Dark Tower: Idris Elba, Matthew McConaughey cast in Stephen King movie.

The tower has begun to peek above the horizon. 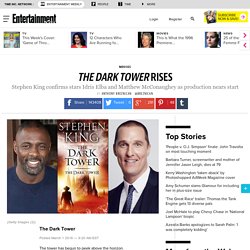 After many years, and many attempts, a film version of Stephen King’s The Dark Tower is finally getting underway with Idris Elba confirmed as the gunslinger and Matthew McConaughey as the mystical foe known as the man in black. Both the author and the movie’s director and co-writer, Nikolaj Arcel, spoke exclusively with EW about the plan to begin adapting the six-shooter-and-sorcery tale — which spans eight novels, assorted comic books and short stories, and is frequently referenced throughout King’s body of work. “The thing is, it’s been a looong trip from the books to the film,” King says, putting it right in context: “When you think about it, I started these stories as a senior in college, sitting in a little sh-tty cabin beside the river in Maine, and finally this thing is actually in pre-production now.”

He laughs. “I’m delighted, and I’m a little bit surprised.” RELATED: Stephen King: 10 Best and 5 Worst Adaptations. How to watch every Marvel property in the perfect order. You've probably seen most of Marvel's films, but what about the TV shows? 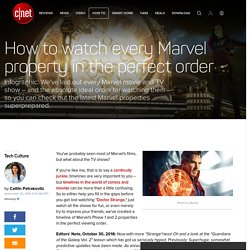 If you're like me, that is to say a continuity junkie, timelines are very important to you -- but timelines in the world of comics and movies can be more than a little confusing. So to help you fill in the gaps before "Daredevil" or "Captain America: Civil War," watch all the shows for fun, or even just try to impress your friends, we've created a timeline of Marvel's Phase 1 and 2 properties in the perfect viewing order. Editors' Note, January 21, 2015: Parts of this have been updated since publishing to reflect new TV tidbits (premiere dates! Pilot orders!) From Netflix and ABC. The Marvel Cinematic Universe, as it's called, also sometimes includes connected properties such as comics or shorts. Every film listed on the left is a single-character movie, meaning each film revolves around the title character.

You'll also notice the Marvel "One-Shots" are missing from the graphic. Enlarge Image So, be honest. 30 best movies about mental illness. Dragon Ball Z: Doragon bôru Z - Fukkatsu no 'F' (2015) YIFY - Download Movie TORRENT - YTS. Login Register You will have to register a new user in the next days. 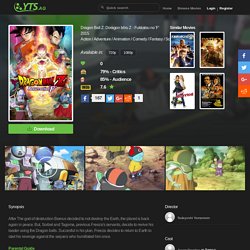 Registration will be resumed in the next days. If you have Forgotten your password or you want to send you again the activation link, just type in your Email and we will send you a link to Reset your password or Activate your account. Loading, please wait Quality: Genre: Rating: Order By: Dragon Ball Z: Doragon bôru Z - Fukkatsu no 'F' Action / Adventure / Animation / Comedy / Fantasy / Sci-Fi Download Select movie quality 720p File size DownloadMagnet 1080p Available in: 720p1080p 79% - Critics 85% - Audience 720p1080p Similar Movies. The Intern (2015) YIFY - Download Movie TORRENT - YTS. Login Register You will have to register a new user in the next days. 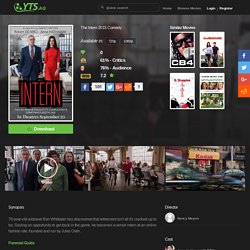 Registration will be resumed in the next days. If you have Forgotten your password or you want to send you again the activation link, just type in your Email and we will send you a link to Reset your password or Activate your account. SUPER BOWL TRAILER 2016 - All Movie Trailers & TV Spots.