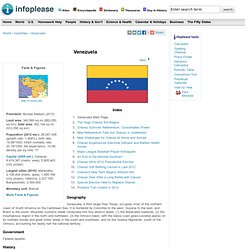 It is bordered by Colombia to the west, Guyana to the east, and Brazil to the south. Mountain systems break Venezuela into four distinct areas: (1) the Maracaibo lowlands; (2) the mountainous region in the north and northwest; (3) the Orinoco basin, with the llanos (vast grass-covered plains) on its northern border and great forest areas in the south and southeast; and (4) the Guiana Highlands, south of the Orinoco, accounting for nearly half the national territory.

Federal republic. Venezuela: History. The History of Venezuela. Venezuela_Anatomy_of_a_Collapse. Analysis: How Hugo Chavez changed Venezuela. 6 March 2013Last updated at 02:31 ET By Victor Bulmer-Thomas Latin America analyst Hugo Chavez was at the centre of Veneuelan political life for 14 years Hugo Chavez burst onto the national scene in Venezuela in a failed military uprising in 1992. 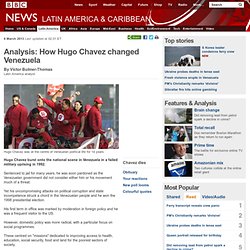 Sentenced to jail for many years, he was soon pardoned as the Venezuelan government did not consider either him or his movement much of a threat. Yet his uncompromising attacks on political corruption and state incompetence struck a chord in the Venezuelan people and he won the 1998 presidential election. His first term in office was marked by moderation in foreign policy and he was a frequent visitor to the US. However, domestic policy was more radical, with a particular focus on social programmes.

These centred on "missions" dedicated to improving access to health, education, social security, food and land for the poorest sectors of society. An alliance began to take shape with Cuba in order to fulfil these ambitions. Radical change Regional vision. Venezuela’s Republic of Crime - Kevin Casas-Zamora. Exit from comment view mode. 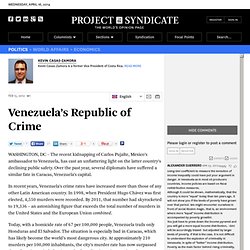 Click to hide this space. Capriles Radonski and the New Venezuelan Opposition. In October, Venezuelans will head to the polls for the fourth presidential vote since Hugo Chávez took power in 1999. 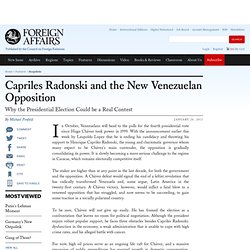 With the announcement earlier this week by Leopoldo Lopez that he is ending his candidacy and throwing his support to Henrique Capriles Radonski, the young and charismatic governor whom many expect to be Chávez's main contender, the opposition is gradually consolidating its power. It is slowly becoming a more serious challenge to the regime in Caracas, which remains electorally competitive itself. Hugo Chávez, meet your competition. For years, Venezuela's opposition to Hugo Chávez looked like a bit of a joke. 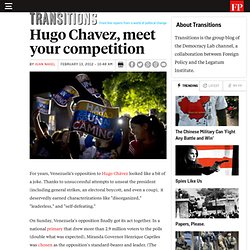 Thanks to unsuccessful attempts to unseat the president (including general strikes, an electoral boycott, and even a coup), it deservedly earned characterizations like "disorganized," "leaderless," and "self-defeating. " On Sunday, Venezuela's opposition finally got its act together. In a national primary that drew more than 2.9 million voters to the polls (double what was expected), Miranda Governor Henrique Capriles was chosen as the opposition's standard-bearer and leader. (The photo above shows his followers celebrating the win.) Capriles's victory over four other candidates was impressive: at 62% of the opposition vote, he doubled his nearest rival's tally, earning a strong claim to be the opposition's consensus candidate.

The man who could be Venezuela's next president. Venezuela President Hugo Chavez's disclosure that his cancer has recurred raises hard questions about his ability to campaign for re-election in October. 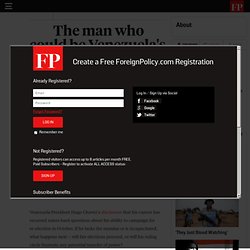 If he lacks the stamina or is incapacitated, what happens next -- will fair elections proceed, or will his ruling circle frustrate any potential transfer of power? In short, if there is new leadership, can one imagine a shift in which Venezuela stops using its oil wealth to support a violent Colombian guerrilla movement? Chávez: Venezuela Developed First Unarmed Drone [Voltaire Network]

Venezuelan President Hugo Chávez announced his country has developed its own unarmed aerial drone with help from Iran, China and Russia, saying the drones had military and civilian uses. 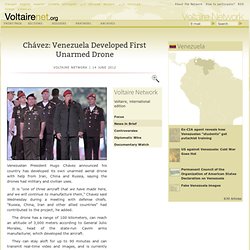 It is "one of three aircraft that we have made here, and we will continue to manufacture them," Chavez said Wednesday during a meeting with defense chiefs. "Russia, China, Iran and other allied countries" had contributed to the project, he added. The drone has a range of 100 kilometers, can reach an altitude of 3,000 meters according to General Julio Morales, head of the state-run Cavim arms manufacturer, which developed the aircraft. They can stay aloft for up to 90 minutes and can transmit real-time video and images, and is currently being upgraded in order to carry out night flights, he added. The three-by-four-meter drone was part of a system "exclusively for defense," aimed at surveillance and the monitoring of pipelines, dams and other rural infrastructure, Morales said. 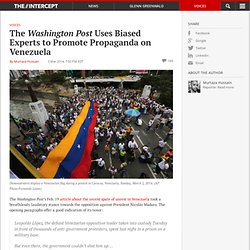 (AP Photo/Fernando Llano) The Washington Post’s Feb. 19 article about the recent spate of unrest in Venezuela took a breathlessly laudatory stance towards the opposition against President Nicolás Maduro. The opening paragraphs offer a good indication of its tenor: Chavez.