Burma. Burma ( i/ˈbɜrmə/ BUR-mə), officially the Republic of the Union of Myanmar, commonly shortened to Myanmar ( i/ˈmjɑːnˌmɑr/ MYAHN-mar,[7] /ˈmaɪænmɑr/ or /ˈmjænmɑr/),[8][9][10][11] is a sovereign state in Southeast Asia bordered by Bangladesh, India, China, Laos and Thailand. 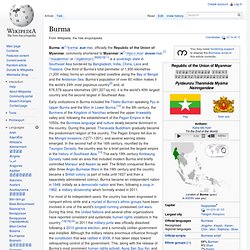 One third of Burma's total perimeter of 1,930 kilometres (1,200 miles) forms an uninterrupted coastline along the Bay of Bengal and the Andaman Sea. Burma's population of over 60 million makes it the world's 24th most populous country[2] and, at 676,578 square kilometres (261,227 sq mi), it is the world's 40th largest country and the second largest in Southeast Asia. For most of its independent years, the country has been engrossed in rampant ethnic strife and a myriad of Burma's ethnic groups have been involved in one of the world's longest-running unresolved civil wars. Burma is a country rich in jade and gems, oil, natural gas and other mineral resources.

Etymology[edit] There are also other variations. History[edit] Burma economy: IMF says growth to accelerate further. 8 May 2012Last updated at 22:12 ET The decision to float the currency has been one of the boldest economic reforms in Burma Burma's growth is set to accelerate, driven by commodity exports and increased investment, the International Monetary Fund (IMF) has said. 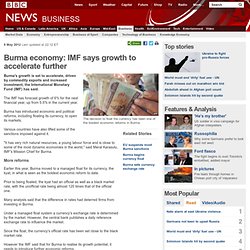 The IMF has forecast growth of 6% for the next financial year, up from 5.5% in the current year. Burma has introduced economic and political reforms, including floating its currency, to open its markets. Various countries have also lifted some of the sanctions imposed against it. "It has very rich natural resources, a young labour force and is close to some of the most dynamic economies in the world," said Meral Karasulu, IMF's Mission Chief for Burma. More reforms Earlier this year, Burma moved to a managed float for its currency, the kyat, in what is seen as the boldest economic reform to date. Aung San Suu Kyi's victory does not bring Burma freedom. Aung San Suu Kyi waves to the crowd in Burma, with her party celebrating a major victory in byelections. 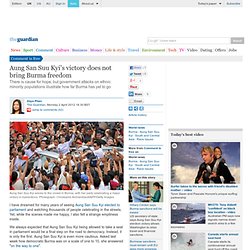 Photograph: Christophe Archambault/AFP/Getty Images I have dreamed for many years of seeing Aung San Suu Kyi elected to parliament and watching thousands of people celebrating in the streets. Yet, while the scenes made me happy, I also felt a strange emptiness inside. We always expected that Aung San Suu Kyi being allowed to take a seat in parliament would be a final step on the road to democracy. Why Burma Shouldn’t Listen to the IMF - By Rick Rowden.

Burma is at a crossroads. 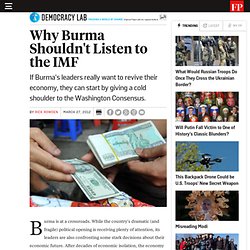 While the country's dramatic (and fragile) political opening is receiving plenty of attention, its leaders are also confronting some stark decisions about their economic future. After decades of economic isolation, the economy of Burma (also known as Myanmar) is badly in need of reforms than can better promote development. The choices that Burma's government makes in the coming months could well determine what the country will look like 30 years from now: an industrialized South Korea or a resource-cursed Nigeria.

Coinciding with its political opening, Burma's leadership has taken steps to deepen the pool of foreign investors in the economy beyond the traditional influence of neighbors China and Thailand. The IMF has already sent several delegations to the country and is assisting the government in unifying its complex system of multiple exchange rates for the currency, the kyat, as a necessary first step to other reforms. SOE THAN WIN / AFP / Getty Images. Ending Myanmar's civil war. Beijing, China - In the past year, Myanmar's government has implemented a surprising series of liberalising reforms. 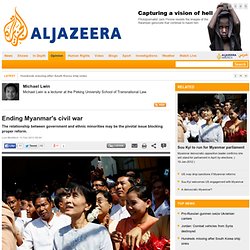 Facing strong environmental and labour protests by activists and NGOs, President Thein Sein has halted construction of the Chinese-backed Myitsone hydroelectric dam, which would have been one of the largest dams in the world (152m tall) and was projected to supply 3,600 to 6,000MW of electricity, largely to Yunnan Province in China. In response to similar concerns, Thein Sein also stopped the building of a 4,000MW coal-fired power plant in the new Special Economic Zone, Dawei, where Thailand's largest construction company, Italian-Thai, is building a deepwater port to support container shipping to compete with Singapore and China. He created a human rights commission that subsequently advocated for the release of the remaining political prisoners in the country. British rule Divides were not only drawn on ethnic lines; religious distinctions were forged as well. Burma. Myanmar Foreign policy. Political change in Burma ?