Chile Timeline. Travel through our timeline of major events in Chile's history. 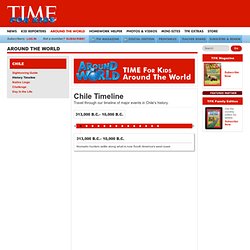 Nomadic hunters settle along what is now South America's west coast. Incas from Peru conquer northern Chile. Portuguese explorer Ferdinand Magellan becomes the first European to sight Chile as he sails through the strait now named for him. Chile - History. Surrounded on three sides by virtually impassable barriers, Chile's rich central valley remained largely unknown to the outside world until the middle of the fifteenth century, when the Incas began their great conquests of much of the continent. 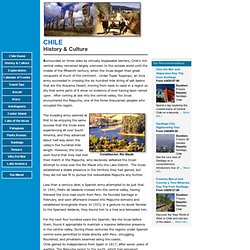 Under Tupac Yupanqui, an Inca army succeeded in crossing the six hundred mile string of salt basins that are the Atacama Desert, moving from oasis to oasis in a region so dry that some parts of it show no evidence of ever having been rained upon. History of Chile - Lonely Planet Travel Information. Beginnings It doesn't sound like much: a small child's footprint left in a marshy field. 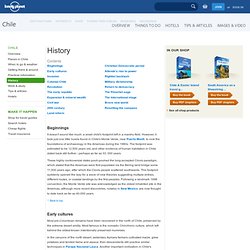 HISTORY OF CHILE. Santiago de Chile West of Andes Mountains. 9780521827492_frontmatter. Democracy after Pinochet: politics, parties and elections in Chile - Alan Angell. This book explores how democracy has developed in Chile since the end of the military dictatorship in 1990. 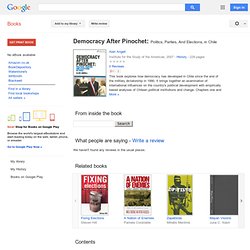 It brings together an examination of international influences on the country's political development with empirically based analyses of Chilean political institutions and change. Chapters one and two examine international aspects of the 1973 coup and how these influenced the development of politics inside Chile. Chapters three, four, and five provide empirical analyses of the 1989, 1993, and 1999/2000 presidential elections, respectively.

Chapter six investigates how the Pinochet factor influenced developments after 1990 and the Chilean reaction to Pinochet's arrest in London in 1998. Chapter seven assesses changes in the Chilean party system and links these to similar processes elsewhere. Chile: Earthquake Reveals Social Inequalities. The February 27 earthquake in Chile left more than 2 million displaced, at least 497 confirmed deaths [es], and an estimated US$30 billion in damage. 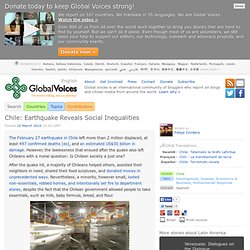 However, the lawlessness that ensued after the quake also left Chileans with a moral question: Is Chilean society a just one? After the quake hit, a majority of Chileans helped others, assisted their neighbors in need, shared their food surpluses, and donated money in unprecedented ways. Nevertheless, a minority, however small, looted non-essentials, robbed homes, and intentionally set fire to department stores, despite the fact that the Chilean government allowed people to take essentials, such as milk, baby formula, bread, and flour. Photo of empty supermarket in Concepción by heedmane and used under a Creative Commons license. Chilean TV stations brought this reality to the homes of millions in a fairly accurate fashion [es], and so Chileans saw how some helped themselves to plasma TVs, refrigerators, and DVD players.

The Chicago boys and the Chilean earthquake - Chile Earthquake. The ghost of Milton Friedman, writes Bret Stephens in the Wall Street Journal, “was surely hovering protectively over Chile in the early morning hours of Saturday.” 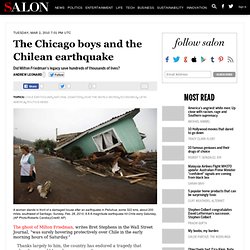 Thanks largely to him, the country has endured a tragedy that elsewhere would have been an apocalypse. Stephens’ logic is simple. After the U.S. -backed coup in 1973, in which Gen. Pinochet seized power from the democratically elected president Salvador Allende, a group of Chilean economists mentored by Friedman, and known to history as “the Chicago boys,” instituted a series of radical free market reforms. Some might find it intellectually provocative to cite Milton Friedman’s authority in an argument that depends on the foundation of successfully enforced government-mandated building code regulations. Chile rising - Fault Lines. Ash and Steam Released from Puyehue-Cordón Caulle Volcano. Chile and Argentina - March 7th, 2012 Chile’s Puyehue-Cordón Caulle volcano could be seen releasing ash and steam at the end of the first week of March, 2012. 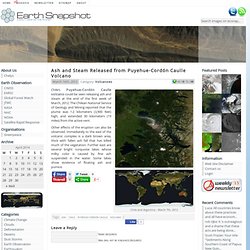 The Chilean National Service of Geology and Mining reported that the plume was 1.2 kilometers (3,900 feet) high, and extended 30 kilometers (19 miles) from the active vent. Other effects of the eruption can also be observed. Immediately to the east of the volcanic complex is a dark brown area, thick with fallen ash fall that has killed much of the vegetation. Further east are several bright turquoise lakes whose milky color is caused by fine ash suspended in the water. Student Movement Rocks Chile. Chile riot police clash with student protesters. Digital Activism Daily: #Chile student protests, #LondonRiots, and free press in Togo. The Chilean Winter and Return of Student Activism. Why is Piñera's government so unpopular in Chile?

A year ago, 33 Chilean miners were trapped in a mine in the north of the country. 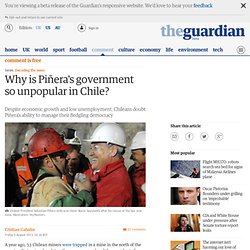 Sixty-nine days later, they were rescued and the president of Chile, Sebastian Piñera, was rewarded with a record approval rating. Those days now seem like a distant memory. Piñera's stock has fallen, so much so that he has become the most unpopular president since 1990, when democracy was restored in Chile. According to the CEP (Centro de Estudios Públicos), only 26% of citizens approve of Piñera's government, while 53% reject his administration. Piñera: A steady decline in popularity Rightwing Piñera took office in 2010, promising a new way of governing, but he has not been able to fulfil this commitment. This episode is a good example of the conflict of interest issues that Piñera has faced since his first day in office.

Missed opportunities What the people want: same opportunities for all Recent demonstrations and protests have overshadowed his administration. Chile: State Security Law, Violence Deterrent or Repression? On October 18, 2011, Chilean Interior Minister Rodrigo Hinzpeter invoked [es] the State Security Law to punish the persons responsible for the burning of a bus during protests convened by several of the country's unions to support the student movement. 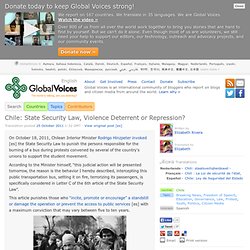 According to the Minister himself, “this judicial action will be presented tomorrow, the reason is the behavior I hereby described, intercepting this public transportation bus, setting it on fire, terrorizing its passengers, is specifically considered in Letter C of the 6th article of the State Security Law”. This article punishes those who “incite, promote or encourage” a standstill or damage the operation or prevent the access to public services [es] with a maximum conviction that may vary between five to ten years.