Brazil - History. The Portuguese were the first European settlers to arrive in the area, led by adventurous Pedro Cabral, who began the colonial period in 1500. 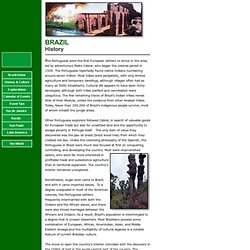 The Portuguese reportedly found native Indians numbering around seven million. Most tribes were peripatetic, with only limited agriculture and temporary dwellings, although villages often had as many as 5000 inhabitants. Cultural life appears to have been richly developed, although both tribal warfare and cannibalism were ubiquitous. The few remaining traces of Brazil's Indian tribes reveal little of their lifestyle, unlike the evidence from other Andean tribes. Today, fewer than 200,000 of Brazil's indigenous people survive, most of whom inhabit the jungle areas.

Other Portuguese explorers followed Cabral, in search of valuable goods for European trade but also for unsettled land and the opportunity to escape poverty in Portugal itself. Nonetheless, sugar soon came to Brazil, and with it came imported slaves. Brazil History. Historians and scientists have discovered that communities of people were living in what is now known as Brazil as long as 8 000 years ago. 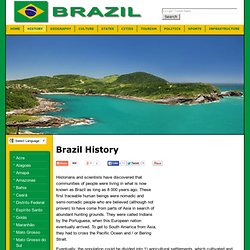 These first traceable human beings were nomadic and semi-nomadic people who are believed (although not proven) to have come from parts of Asia in search of abundant hunting grounds. They were called Indians by the Portuguese, when this European nation eventually arrived. To get to South America from Asia, they had to cross the Pacific Ocean and / or Bering Strait. Eventually, the population could be divided into 1) agricultural settlements, which cultivated and lived off the land, and 2) semi-nomadic people, who moved around to find suitable food and water.

These early societies hunted, fished and grew their own goods to survive. Conquest of the Amazon on 5 Cruzerios 1962 Banknote from Brazil. Individual indigenous tribes and settlements numbered around 2 000 when the Portuguese first discovered Brazil, as it came to be known. A Brief History of Brazil. Empire of Exceptions: The Making of Modern Brazil.

Brazil may be one of the 21st century’s emerging superpowers, but its history is a mystery to many. Gabriel Paquette tells the story of its early years as an independent state. Painted ceiling of a Baroque colonial church in the old mining town of Mariana, Minas GeraisThe Age of Revolutions largely bypassed the Portuguese empire. By 1783 Britain’s 13 North American colonies had broken definitively with the mother country; France’s wealthy, sugar-producing stronghold of Saint-Domingue (modern Haiti) descended into political turmoil in 1791; even Spanish America was engulfed by civil unrest after 1808, the year in which Napoleon’s armies flooded across the Pyrenees and occupied Spain. Dilma Rousseff's mega-dam to doom Brazil Indians [Voltaire Network] The International Labour Organization (ILO) declared that the Brazilian government has failed to fulfill its obligations regarding the human rights of indigenous peoples. 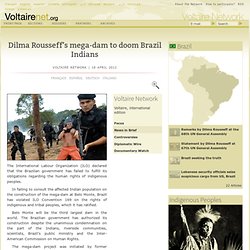 In failing to consult the affected Indian population on the construction of the mega-dam at Belo Monte, Brazil has violated ILO Convention 169 on the rights of indigenous and tribal peoples, which it has ratified. Belo Monte will be the third largest dam in the world. The Brazilian government has authorized its construction despite the unanimous condemnation on the part of the Indians, riverside communities, scientists, Brazil’s public ministry and the Inter-American Commission on Human Rights. The mega-dam project was initiated by former President Lula Da Silva, and it was his successor Dilma Rousseff in person, former energy minister and current president of Brazil, who decided to kick start construction in January 2012 despite strong opposition. Brazil's Girl Power. José Alberto, Murilo, Geraldo, Angela, Paulo, Edwiges, Vicente, Rita, Lucia, Marcelino, Teresinha. 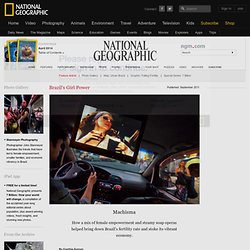 That makes 11, right? Not including the stillbirth, the three miscarriages, and the baby who lived not quite one full day. Dona Maria Ribeiro de Carvalho, a gravelly-voiced Brazilian lady in her 88th year, completed the accounting of her 16 pregnancies and regarded José Alberto, her oldest son, who had come for a Sunday visit and was smoking a cigarette on her couch. "With the number of children I had," Dona Maria said mildly, her voice conveying only the faintest reproach, "I should have more than a hundred grandchildren right now. " José Alberto, who had been fishing all morning at the pond on his ranch, was still in his sweatpants. That new Brazilian fertility rate is below the level at which a population replaces itself. And it's not simply wealthy and professional women who have stopped bearing multiple children in Brazil. So why two?