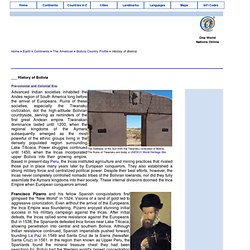 Ruins of these societies, especially the Tiwanaku civilization, dot the high-altitude Bolivian countryside, serving as reminders of the first great Andean empire. Tiwanakan dominance lasted until 1200, when the regional kingdoms of the Aymara subsequently emerged as the most powerful of the ethnic groups living in the densely populated region surrounding Lake Titicaca. Power struggles continued until 1450, when the Incas incorporated upper Bolivia into their growing empire. Based in present-day Peru, the Incas instituted agriculture and mining practices that rivaled those put in place many years later by European conquerors. They also established a strong military force and centralized political power. HISTORY OF BOLIVIA. Mystery of the Akapana Pyramid. Puma Punka, Bolivia. Puma Punku, Bolivia. Guaraní people. Guaraní are a group of culturally related indigenous peoples of South America. 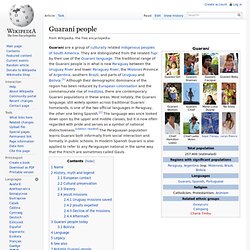 Aymara people. The Aymara or Aimara (Aymara: aymara listen ) are an indigenous nation in the Andes and Altiplano regions of South America; about 2 million live in Bolivia, Peru and Chile. 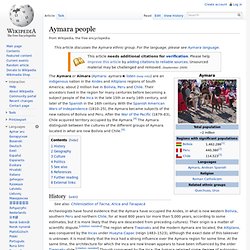 Their ancestors lived in the region for many centuries before becoming a subject people of the Inca in the late 15th or early 16th century, and later of the Spanish in the 16th century. With the Spanish American Wars of Independence (1810–25), the Aymara became subjects of the new nations of Bolivia and Peru. Quechua people. Quechuas (also Runakuna, Kichwas, and Ingas) is the collective term for several indigenous ethnic groups in South America who speak a Quechua language (Southern Quechua mainly), belonging to several ethnic groups in South America, especially in Peru, Ecuador, Bolivia, Chile, Colombia and Argentina. 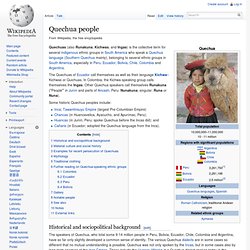 The Quechuas of Ecuador call themselves as well as their language Kichwa–Kichwas or Quichuas. In Colombia, the Kichwa-speaking group calls themselves the Ingas. Other Quechua speakers call themselves Runakuna ("People"' in Junín and parts of Ancash, Peru: Nunakuna; singular: Runa or Nuna). Some historic Quechua peoples include: Bolivian Bowler Hats. I’m sure Thomas and William Bowler had no idea that the hat they created back in 1849 for English gentlemen on horseback would be a South American fashion statement amongst Andean indigenous women. 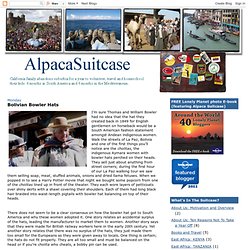 Walk the streets of La Paz, Bolivia and one of the first things you’ll notice are the cholitas, the indigenous Aymara women with bowler hats perched on their heads. They sell just about anything from street corners; during the first hour of our La Paz walking tour we saw them selling soap, meat, stuffed animals, onions and dried llama fetuses. When we popped in to see a Harry Potter movie that night we bought some popcorn from one of the cholitas lined up in front of the theater. 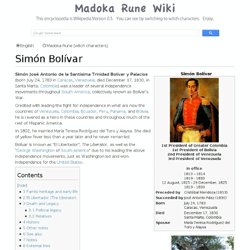 Evo Morales. Juan Evo Morales Ayma, (born October 26, 1959), popularly known as Evo (Spanish pronunciation: [ˈeβo]), is a Bolivian cocalero activist and politician, who has served as President of Bolivia since 2006. 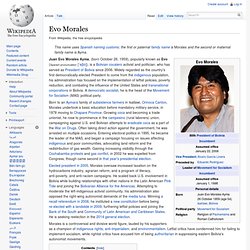 Identity in the Bolivia of Evo - ThePrisma.co.uk. This will be the title of a talk by Rosaleen Howard on July 5th. 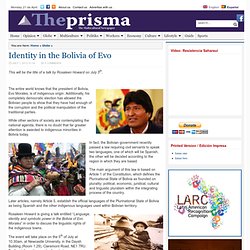 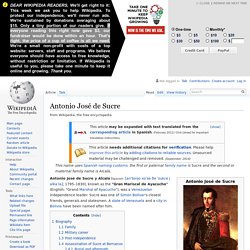 Sucre was one of Simón Bolívar's closest friends, generals and statesmen. A state of Venezuela and a city in Bolivia have been named after him. Biography[edit] Family[edit] The aristocratic Sucre family trace its roots back to origins in Flanders. Military career[edit] Simón Bolívar. Simón José Antonio de la Santísima Trinidad Bolívar y Palacios Ponte y Blanco (24 July 1783 – 17 December 1830), commonly known as Simón Bolívar (Spanish pronunciation: [siˈmon boˈliβar]), was a military and political leader. 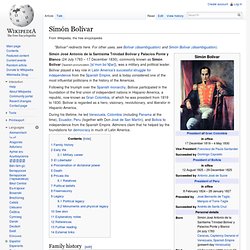 La Paz. Nuestra Señora de La Paz (Spanish pronunciation: [ˈnwes.tɾa seˈɲoɾa ðe la pas]; English: Our Lady of Peace; Aymara: Chuquiago Marka or Chuqiyapu), commonly known as La Paz, is Bolivia's third[6] most-populous city,[4] the seat of the country's government and the capital of La Paz Department. Simón Bolívar. Evo Morales, Bolivia's President, Celebrates Mayan 'Apocalypse' With Tradition, Ushers In Era Of Love (PHOTOS) The Mayan apocalypse, predicted to take place on Dec. 21, has arrived without so much as a sputter. But while many around the world began to shutter their arks and bunkers in wait for another doomsday, Bolivia's president was celebrating the arrival of a new era.

Evo Morales was expected to mark the auspicious day by sailing across Lake Titicaca on a huge reed boat to attend a celebration on the Island of the Sun, Desert Local News reports. The boat, said to be one of the largest reed ships built in modern times, is a 50-foot long vessel made out of reeds that grow along the edges of the lake, Indian Country Today reports. Described as "remarkable," the boat, which weighs about 12 tons, has garnered quite a bit of attention. It was constructed by Aymara indigenous boatbuilders and is believed to be similar to ships that traveled on Titicaca's waters for thousands of years. According to reports.