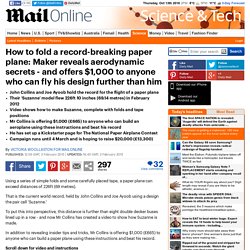 That is the current world record, held by John Collins and Joe Ayoob using a design the pair call 'Suzanne.' To put this into perspective, this distance is further than eight double decker buses lined up in a row - and now Mr Collins has created a video to show how Suzanne is made. In addition to revealing insider tips and tricks, Mr Collins is offering $1,000 (£665) to anyone who can build a paper plane using these instructions and beat his record.

Scroll down for video and instructions John Collins and Joe Ayoob hold the record for the farthest flight by a paper aircraft. The video has been released to coincide with Mr Collins' Kickstarter campaign. Mr Collins wants to launch a national paper plane contest in the US and is seeking funding for the contest's website. The campaign launched yesterday and has raised a little over $961 (£639) of its $20,000 (£13,300) target. Paper Airplane Launcher. My boys love anything that can launch or fling items, and this homemade paper airplane launcher really fits the bill! 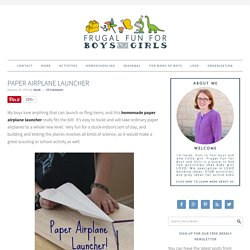 It’s easy to build and will take ordinary paper airplanes to a whole new level. Very fun for a stuck-indoors sort of day, and building and testing the planes involves all kinds of science, so it would make a great scouting or school activity as well. Our paper airplane launcher is a simple design. Aidan drove two nails into the end of a scrap board, added a long rubber band (from the office supply aisle at Walmart), and that was it! We tried shooting planes by just holding the tail of the plane against the rubber band, but the planes kept getting bent and they really didn’t shoot that far. To modify your plane, you will need a paper clip (bent as shown), a hole punch, and tape. Tape the paper clip to the nose of the plane as shown. Yconic - Scholarships and Student Community. How To Make A WiFi Antenna Out of A Pringles Can.

Wi-Fi has completely changed the way we browse the net and use the internet in our day to day life. 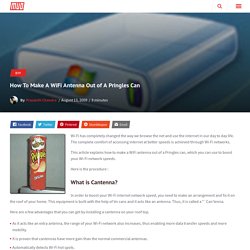 The complete comfort of accessing internet at better speeds is achieved through Wi-Fi networks. This article explains how to make a WiFi antenna out of a Pringles can, which you can use to boost your Wi-Fi network speeds. Here is the procedure : What is Cantenna? In order to boost your Wi-Fi internet network speed, you need to make an arrangement and fix it on the roof of your home. Here are a few advantages that you can get by installing a cantenna on your roof top. Level Requirements - 608 "Duke of Edinburgh" RCACS. Ground School - 608 "Duke of Edinburgh" RCACS. Cadet Co-operative Education Program. Secondary School Course Selection. Pearson School Canada: Pearson eText. Learn to Program Using Python. Introduction to Health and Wellness. Programming in Scratch.

“Although many of the programs designed to teach kids to code are very simplistic, many of them, like Scratch, are suitable for all ages. It doesn't matter how old you are…Get started with the basics of programming!” -Lifehacker Want to learn computer programming, but unsure where to begin? This is the course for you! Scratch is the computer programming language that makes it easy and fun to create interactive stories, games and animations and share them online. This course is an introduction to computer science using the programming language Scratch, developed by MIT. No previous programming knowledge needed. This material is based upon work supported by the National Science Foundation under Grant No. 1044106. Electric Play Dough Project 1: Make Your Play Dough Light Up, Buzz, & Move!

Please ensure you have JavaScript enabled in your browser. 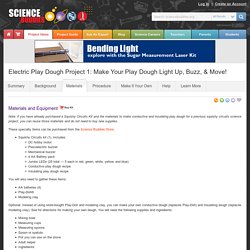 If you leave JavaScript disabled, you will only access a portion of the content we are providing. <a href="/science-fair-projects/javascript_help.php">Here's how. </a> Abstract Do you like playing with squishy play dough or modeling clay? This science project is the first in a three-part series on "squishy circuits," which can all be done with the same materials. Office of the Children's eSafety Commissioner.