UI Patterns For Navigation That Makes Good UX Sense. A new grad’s guide to UX. Best Typography Practices to Consider for Landing Pages. There was a time when brick and mortar businesses were considered as the new wild west and then came marketing campaigns online. 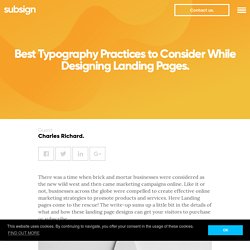 Like it or not, businesses across the globe were compelled to create effective online marketing strategies to promote products and services. Here Landing pages come to the rescue! The write-up sums up a little bit in the details of what and how these landing page designs can get your visitors to purchase or subscribe. What is a landing page? A landing page is nothing much than a follow up to any promises especially the ones that you’ve made in your content. All you just have to do click through and your customers will automatically lead to other pages such as your e-commerce site, or lead generation based. Right from eBook to free trial, contest entry, or webinar registration are some types of Lead generation landing pages that get directed to the submission of contact information.

What Makes a Good Landing Page? #1 Zero-in on offer, not the company 1. 2. 3. Debunking The Myths And Reality Of Artificial Intelligence. Intelligence should be "distributed" where "knowledge" is created and "decisions" are made Depositphotos Lessons learned from recent academic progress and industry adoption of AI Introduction A few years ago, it was hard to find anyone to have a serious discussion about Artificial Intelligence (AI) outside academic institutions. 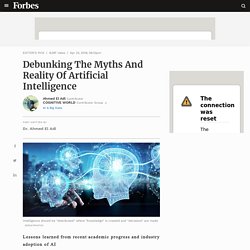 Today, nearly everyone talks about AI. Built by giant thinkers and academic researchers, AI adoption by industries and further development in academia around the globe is progressing at a faster rate than anyone had excepted. AI overcame many obstacles over the last decades mainly on the academic side. The challenge is how industry leaders would have a realistic opinion about what AI can and can’t do for their business and continuously update it so that they can lead their organizations to apply AI in the right way in solving real-world problems and transform their businesses.

The current “messy” state of AI adoption in industries The overhyped promise of Data. Google’s budget Pixel 3a XL pops up at an Ohio Best Buy. Build your First Wearable Android App. In this digital world, the wearable devices are gaining more momentum after Google releases its Android Wear platform for the developers. 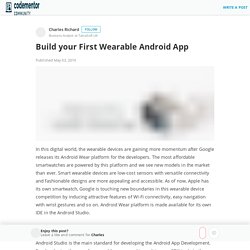 The most affordable smartwatches are powered by this platform and we see new models in the market than ever. Smart wearable devices are low-cost sensors with versatile connectivity and fashionable designs are more appealing and accessible. As of now, Apple has its own smartwatch, Google is touching new boundaries in this wearable device competition by inducing attractive features of Wi-Fi connectivity, easy navigation with wrist gestures and so on. Android Wear platform is made available for its own IDE in the Android Studio. Our application will be a simple android app that sends notifications from a phone to paired wear device by corresponding wearable app with a single button click. For an emulator 1. CSS adb -d forward tcp:5601 tcp:5601 (this must be done every time you connect/reconnect your handset) 6. For an Android Wear Device 1.

Mobile Module 2. The 7 'Senses' of Self-Development. The FT is buying another media startup: Deal Street Asia. Fresh from picking up a majority stake in Europe-based The Next Web, the Financial Times is buying another new media startup. The newspaper, which was founded in 1888, is adding Singapore-based Deal Street Asia to its roster with a deal expected to close in April, according to three sources with knowledge of discussions. Founded in 2014 by Indian journalist Joji Thomas Philip and Sushobhan Mukherjee, Deal Street Asia mixes Asia startup news with updates from Asia’s financial markets and business verticals.

It has around a dozen reporters across Southeast Asia and India, as well as a license to use content from wires. Its investors include Singapore Press Holdings, Vijay Shekhar Sharma, the founder of Alibaba-backed Paytm, the Singapore Angel Network and Hindustan Times, the Indian media firm that operates Mint, which is a Deal Street Asia content partner. The company never disclosed its total fundraising, although TechCrunch wrote about an undisclosed round that closed in late 2015. The Role of Website User Experience on Conversion Rates. In the present scenario, a little latency or sluggish performance is a significant issue. 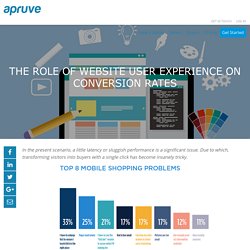 Due to which, transforming visitors into buyers with a single click has become insanely tricky. Source Fortunately, there are ample of methods such as enhancing user experience and market research that can increase your site’s conversion rate is worth its weight in digital gold. Let’s dive into the details! A website’s success or failure highly depends on its conversion rate. The above image is of Google Analytics one of the most overlooked tools for UXers. Now you must be thinking what has user experience to do with conversions? Great user experiences aren’t created overnight, and it does not have to be something extraordinary it just has to make the end user happy. It’s quite simple if you want to lead to something; be it sticking around on your social networking site or buying your stuff.

According to Jason Goldberg, founder, and CEO of Fab.com, User experience matters a lot. Source. Pinterest files for IPO. Apple TV App To Get A Second Life With Video Subscription Service. Tips to Reduce Your Startup Costs: Here’s How.