Painting-people.pdf (Objecto application/pdf) How to Draw the Figure from the Imagination - Part 1. Faces and Face Parts. Anatomy drawing lessons. Art Students Guide to the Proportions of the Human Form. Another mention of the book is on a page of the study of Human Proportions through the ages: Proportionslehre from the Luitpold-Gymnasium Munchen: Polycletus was a Greek Sculptor active in the late 300s and early 200s B.C., along with Phidias, he created the classic Greek style. 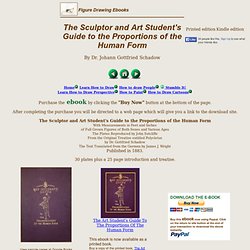 None of his works survive but Roman copies do. He was and is most appreciated for the naturalness of his sculptures and his admiration for the beauty of the natural figure as opposed to rigorous ideals of proportion. He also used a natural shift of weight to one leg known as contrapposto which gave his works a feeling of movement. Feet Drawing. Feet Drawing requires you to be aware of issues such as proportions and main lines. 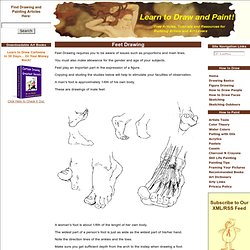 You must also make allowance for the gender and age of your subjects. Feet play an importan part in the expression of a figure. Copying and studing the studies below will help to stimulate your faculties of observation. A man's foot is approximately 1/6th of his own body. These are drawings of male feet: A woman's foot is about 1/8th of the lenght of her own body.

The widest part of a person's foot is just as wide as the widest part of his/her hand. Note the direction lines of the ankles and the toes. Make sure you get sufficient depth from the arch to the instep when drawing a foot. These are drawings of female feet: Children's feet are good to study because they have not been distorted by shoes too much. In chidren the arch of their feet is usually more pronounced. The toes are also more separated than in adult feet, givine grace to the foot. In drawing from nature, sketch only parts if the children move too much. Rat Creature's Journal - how to draw female comic characters (according to Wizard)... Brown_betty asked for examples "to illustrate the exactly how and why female comic characters are illustrated differently than the male. 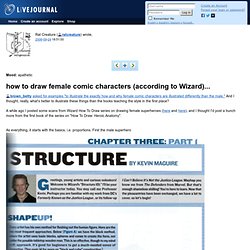 " And I thought, really, what's better to illustrate these things than the books teaching the style in the first place? A while ago I posted some scans from Wizard How To Draw series on drawing female superheroes (here and here), and I thought I'd post a bunch more from the first book of the series on "How To Draw: Heroic Anatomy". As everything, it starts with the basics, i.e. proportions. First the male superhero The female example is similar, but slightly different, notice how he stands firm and straight, wheras she stands with her hips cocked a little and the leg thrust forward? Also notice in the direct torso comparison below, how the male one is ramrod straight, but she curves and leans just a little bit in the same pose? Analytical Figure Drawing SP08.

Simplify Human Anatomy guide by =sakimichan on deviantART. Abdomination: How to draw beef by ~Coelasquid. How to draw all sorts of crap by ~Coelasquid on deviantART. Reference Images for Artists. How To Draw The Head From Any Angle [3/4 View] – Constructing The Head. One of the most popular tutorial request I’ve received was for a training on how to draw the head from any angles other than just the typical straight forward view. 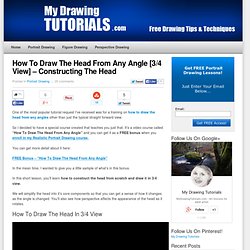 So I decided to have a special course created that teaches you just that. It’s a video course called “How To Draw The Head From Any Angle” and you can get it as a FREE bonus when you enroll in my Realistic Portrait Drawing course. You can get more detail about it here: FREE Bonus – “How To Draw The Head From Any Angle” In the mean time, I wanted to give you a little sample of what’s in this bonus. In this short lesson, you’ll learn how to construct the head from scratch and draw it in 3/4 view. We will simplify the head into it’s core components so that you can get a sense of how it changes as the angle is changed.

Again, this is just a small sample of what’s inside the actually bonus. Inside, you’ll discover how to draw the head in profile view, tilted view, and front view. This bonus is worth $47 by itself. The Human (And Its Others)