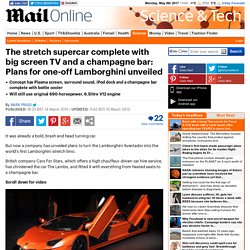 Supercars 2017: Mark Winterbottom reveals new Bottle-O livery, pics, photos. The No. 5 returns to Frosty’s Ford after giving up the champion’s No. 1 at the end of 2016, unveiling his 2017 livery after shaking down a brand-new car at Winton on Thursday. 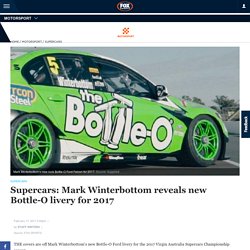 “You won’t be able to miss me out there this year!” Winterbottom said. “The car looks great with the green wheels in particular. It really is a mean, green machine this year. “I’m definitely hungry to go out there and put wins on the board. Ferrari wants to provide steep competition for the McLaren 570S. The rumors about a new, more affordable and highly efficient V-6 Ferrari have been around for more than a year now, and it finally seems like there could be a lot of truth to them. 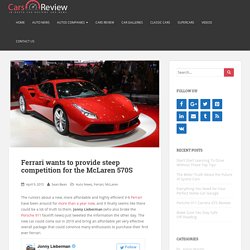 Jonny Lieberman (who also broke the Porsche 911 facelift news) just tweeted the information the other day. The new car could come out in 2019 and bring an affordable yet very effective overall package that could convince many enthusiasts to purchase their first ever Ferrari. Although the debut feels like it is still eons away, we already have some rumored specifications. The 2017 Porsche 911 RSR goes mid-engine, purists be damned. Porsche unveiled its World Endurance Championship and IMSA WeatherTech Championship competitor with the 2017 911 RSR. 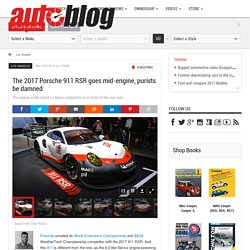 And this 911 is different from the rest, as the 4.0-liter flat-six engine powering this beast is in front of the rear axle, not behind it. That's right, this 24 Hours of Le Mans competitor ditches the iconic rear-engine layout. Porsche isn't talking specifics on how exactly things are arranged back there. Is a Hybrid Vehicle the Right Choice for You. This is a question if it was asked not even twenty years ago, people would have more than likely laughed right in your face. 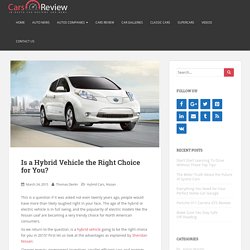 The age of the hybrid or electric vehicle is in full swing, and the popularity of electric models like the Nissan Leaf are becoming a very trendy choice for North American consumers. So we return to the question, is a hybrid vehicle going to be the right choice for you in 2015? First let us look at the advantages as explained by Sheridan Nissan: Cleaner energy, government incentives, smaller efficient cars and engines, optimizing technology to evolve and improve performance. These are just a few things to consider when looking into a hybrid vehicle. Ferrari wants to provide steep competition for the McLaren 570S. 2015 Ford Fusion Hybrid Review. The 2015 Ford Fusion Hybrid has lined up buyers, begging for more. 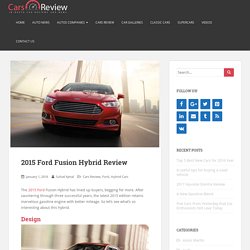 After sauntering through three successful years, the latest 2015 edition retains marvelous gasoline engine with better mileage. So let’s see what’s so interesting about this hybrid. Design The 2015 Ford Fusion is sporting some racy and trendy cuts, with large oblong grille on the front and falling rear slope giving it a hatchback look. While it’s up to you how you play with colors, but it sparkles more in black color and in red it ogles blazing fire. A glassy instrument cluster is piled behind the steering wheel to straight on convey statistical information for the driver.

Five 2018 Car Models Expected to Sizzle. Future car designs are always a topic of discussion around the world. 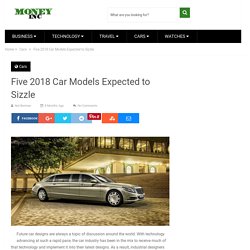 With technology advancing at such a rapid pace, the car industry has been in the mix to receive much of that technology and implement it into their latest designs. As a result, industrial designers and engineers are designing and producing sexy and sleek cars with exceptional specs and many of the latest bells and whistles for convenience and comfort. Even the lower-priced 2018 cars are finding ways to squeeze in additional technologies that may offer a better driver and passenger experience. First UK customers for Ford GT now selected – Autopro. More than 6500 people have applied to own one of the first batch of Ford GTs; the first confirmed UK customers have now been contacted via email The first confirmed UK customers for the new Ford GT have been contacted by email to tell them their request to buy the car has been accepted. 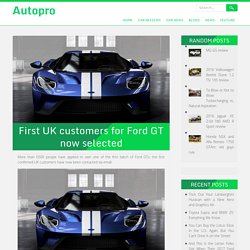 A total of 6506 global orders were received for the model by the time order books closed in spring, but Ford has said just 500 cars will be built in the first two years of production. Today’s email confirms Ford has now begun to allocate the slim selection of cars to the first 500 customers. Cars Reviews, New Cars 2017 Models, Cars Price 2017, Best Cars 2017. Ferrari F12 is one kind of the European luxury car that can be great alternative for the people when they want to buy the luxury car to accompany them in their activity. 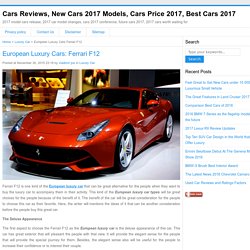 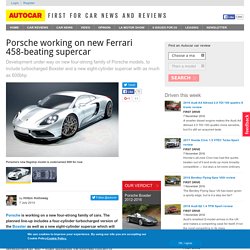 The planned line-up includes a four-cylinder turbocharged version of the Boxster as well as a new eight-cylinder supercar which will look to challenge the Ferrari 458. The as yet unnamed flagship model – thought to be carrying the development tag ‘988’ – finally addresses the long-held concern of many Porsche engineers: that the company cannot adequately compete with eight-cylinder Ferraris with the classic six-cylinder engine used by the 911. There’s no clear news on the shape of the 988, although it will have strong shades of the 918 hypercar about its styling and in detailing such as the headlights.

Future Car Technologies 2020. Car technology has revolutionized the way we drive and interact with our vehicles. Future car technologies are even more promising allowing you to not only commute without driver assistance but also feel safest on the road. Today we will discuss future car technologies 2020 to give you a feel how fun the driving can be in the future. The US government alongside automakers is working on car technologies to make future vehicles talk to each other as well as their surrounding objects. We have seen numerous times vehicles jumping red lights and cause collisions. Top 5 Best New Cars for 2016 Year. Automobile brands struggle hard to beat their competitors in the international market. 2017 Ford GT Supercar: 25 Cars Worth Waiting For.

In an industry that tends toward superficiality in its anniversary observations—for the Corvette’s 50th anniversary, Chevy painted a handful of cars maroon—Ford goes big. It gave itself the 2005 GT to celebrate its 100th birthday; got around creating a special-edition 50th-anniversary Mustang by redesigning the entire car; and is now honoring the golden anniversary of its historic 1-2-3 sweep at Le Mans in 1966 with another interpretation of the winning GT40. As opposed to that redux of 2005, this one isn’t a 13/10-scale model of anything. Jumping Dead Batteries.

07 Jun 2016 It happens to every car owner at some point. Someone leaves a light on, or a door ajar, in your car and your battery loses all its charge. The symptoms are pretty obvious; when you go to turn the key to start your car, nothing happens – no lights come on, nothing makes a clicking sound. Five Cars From Yesterday that Car Enthusiasts Still Love Today. A New Gasoline Blend. Vehicle Lubrication.

With the application of some lubricants you can get your vehicle to be nice and quiet again and probably avoid repairs as well. Some Automotive Technologies That Are Almost Here. What Drivers Should Know About Engine Oil. There are now many brands and types of oil on the market. Causes of a Shaking Steering Wheel. CV Joints CV joints wear out over time. Top 5 Hatchbacks of 2016 Under $20,000. The hatchbacks have always been people’s favorite because of their affordability, fuel consumption and practicality.