WPATH. Barbara Walters Exclusive: Pregnant Man Expecting Second Child - Thomas Beatie, the controversial "pregnant man" who gave birth to a daughter earlier this year, reveals to Barbara Walters in an exclusive interview that he is pregnant again with his second child. 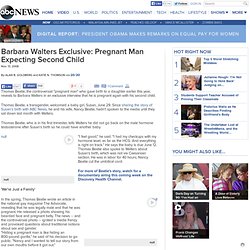 Thomas Beatie, a transgender, welcomed a baby girl, Susan, June 29. Since sharing the story of Susan's birth with ABC News, he and his wife, Nancy Beatie, hadn't spoken to the media until they sat down last month with Walters. Thomas Beatie, who is in his first trimester, tells Walters he did not go back on the male hormone testosterone after Susan's birth so he could have another baby. "I feel good," he said. CPATH. Welcome to AnneLawrence.com.