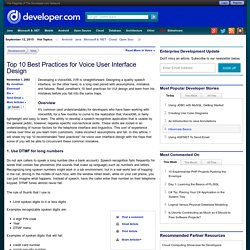 Designing a quality speech interface, on the other hand, is a long road paved with assumptions, mistakes and failures. Read Jonathan's 10 best practices for VUI design and learn from his mistakes before you fall into the same traps. Overview It's common (and understandable) for developers who have been working with VoiceXML for a few months to come to the realization that VoiceXML is fairly lightweight and easy to learn.

The ability to develop a speech recognition application that is usable by the general public, however, requires specific non-technical skills. How To Make Siri Say Anything. [Mac only] Siri is the artificial intelligence personal assistant made available on your iPhone. 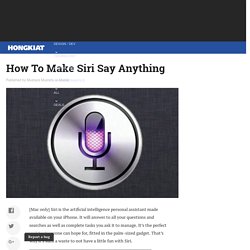 It will answer to all your questions and searches as well as complete tasks you ask it to manage. Speech Recognition: History & Fundamentals. B202_Boucher. Speech user interfaces: An interview with James Lewis. Ow.ly - profile of @SpeechTEK. VUI Design Topic: Personas. In everyday usage, a persona is a character played by an actor. 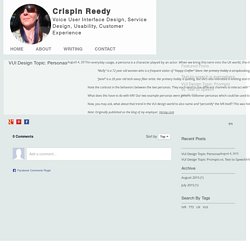 When we bring this term into the UX world, the most common meaning is a fictional character who represents a customer. This fictional person is based on demographic and psychological characteristics which drive customers in the real world. [Infographic] What your IVR doesn’t want you to know. In a recent study of 2,000 adults, IVR was voted the most annoying invention of all time. 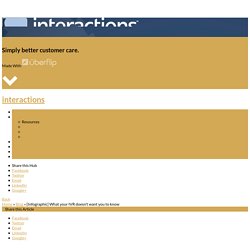 Unfortunately, most IVRs are the gateway to a customer service representative, which means that your most used channel, is also your worst. It’s clearly the weakest customer service channel for the majority of enterprises today. Where does Speech make Sense? Cc_paper.pdf. Best Practices For Designing A VUI. The Golden Mean — Thoughts on in-car UX. @colmanw I’m fascinated by in-car UX. 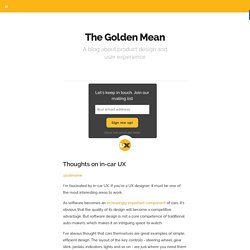 If you’re a UX designer, it must be one of the most interesting areas to work. As software becomes an increasingly important component of cars, it’s obvious that the quality of its design will become a competitive advantage. But software design is not a core competence of traditional auto-makers, which makes it an intriguing space to watch. I’ve always thought that cars themselves are great examples of simple, efficient design. Outside of these critical controls, car design doesn’t always stack up. Many auto-makers have turned to tech companies to help them with their in-car entertainment systems. Google, Apple and Blackberry are all developing similar systems - although none of them are yet in widespread use. Convergys-Analytics-IVR-Lost-Channel.pdf. VUI-Tips.pdf. SAM – Socialising Around Media – The State of the Art of Dialogue Systems. 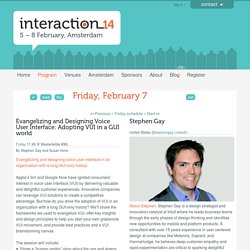 Apple’s Siri and Google Now have ignited consumers’ interest in voice user interface (VUI) by delivering valuable and delightful customer experiences. Innovative companies can leverage VUI solutions to create a competitive advantage. The origin of personas. The Inmates Are Running the Asylum, published in 1998, introduced the use of personas as a practical interaction design tool. 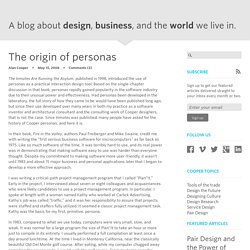 Based on the single-chapter discussion in that book, personas rapidly gained popularity in the software industry due to their unusual power and effectiveness. The Future of Voice Recognition and Its Impact. Not too long ago, the idea of being able to talk to a computer seemed like science fiction. 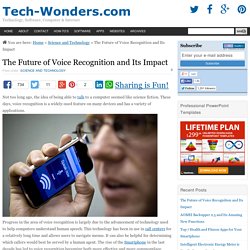 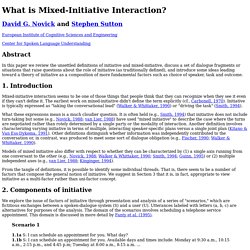 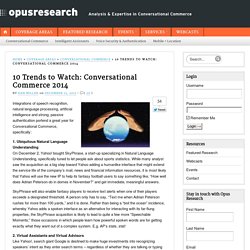 Ubiquitous Natural Language Understanding On December 2, Yahoo! Bought SkyPhrase, a start-up specializing in Natural Language Understanding, specifically tuned to let people ask about sports statistics. While many analyst saw the acquisition as a big step toward Yahoo adding a humanlike interface that might extend the service life of the company’s mail, news and financial information resources, it is most likely that Yahoo will use the new IP to help its fantasy football users to say something like, “How well does Adrian Peterson do in domes in November?”

An economical approach to modeling speech recognition accuracy. Department of Industrial Engineering and Operations Research, Virginia Polytechnic Institute and State University, Blacksburg, Virginia 24061, U.S.A. Received 5 July 1983, Available online 4 August 2008 Choose an option to locate/access this article: Check if you have access through your login credentials or your institution Check access Get rights and content. Course Introduction (14:11) Opinion / Why brands should ask 'is it voice-enabled?' Aaron Shapiro, CEO of Huge, on why brands need to adapt now for voice user interfaces and the most important aspects to think about as they make the shift ‘Wearables’ and the inelegantly named ‘Internet of Things’ sit at the top of most digital trend lists these days, with prognosticators hyping everything from Google Glass to the Nest thermostat. But lost amidst the buzz is an important development for consumer technology that will affect how we interact with wearables, smart devices and our boring old smartphones.

Voice recognition keeps getting better – Microsoft recently demo’ed its sophisticated Cortana digital personal assistant, which understands voice commands and adapts to its user’s needs. Not to be outdone, Apple purchased the U.K. -based Novauris Technologies earlier this month. This matters because, while it may be awkward right now, voice is a far more natural manner for humans to interact with computers for many form factors and use cases than type and touch. Automatic Speech Recognition (ASR) Software - An Introduction. In terms of technological development, we may still be at least a couple of decades away from having truly autonomous, intelligent artificial intelligence systems communicating with us in a genuinely “human-like” way.

But, in many ways, we’re progressing steadily towards this future scenario at a surprisingly fast pace thanks to the continuing development of what is known as automated speech recognition technology. And at least so far, it’s looking to promise some truly useful innovations in user experience for all sorts of applications. Why designing for a VUI is more difficult than designing for a GUI.