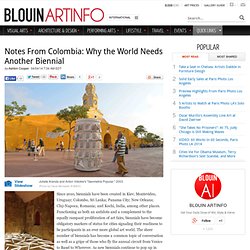 Functioning as both an antidote and a complement to the equally rampant proliferation of art fairs, biennials have become obligatory markers of status for cities signaling their readiness to be participants in an ever more global art world. The sheer number of biennials has become a common topic of conversation as well as a gripe of those who fly the annual circuit from Venice to Basel to Wherever. As new biennials continue to pop up in far-flung places around the globe, those who operate within the conventional Western art world are prone to wonder what purpose they serve.

Who sees them? Will they fit into the already packed schedules of the globe trotting art elite? Conceived in 2013, the bienal was assembled in just eight months with a two-month run, from February 7 to April 7. Dispatch: Colombia. Today, fresh winds of change blow through Colombia. 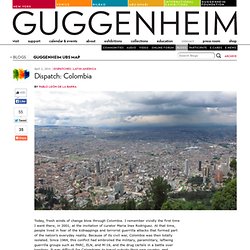 I remember vividly the first time I went there, in 2001, at the invitation of curator Maria Ines Rodriguez. At that time, people lived in fear of the kidnappings and terrorist guerrilla attacks that formed part of the nation’s everyday reality. Saltz on the Great and Powerful Simchowitz. Stefan Simchowitz, Sith Lord. 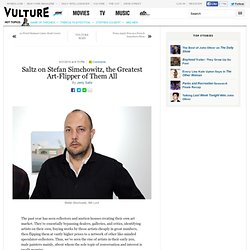 The past year has seen collectors and auction houses creating their own art market. They’re essentially bypassing dealers, galleries, and critics, identifying artists on their own, buying works by those artists cheaply in great numbers, then flipping them at vastly higher prices to a network of other like-minded speculator-collectors. Thus, we’ve seen the rise of artists in their early 20s, male painters mainly, about whom the sole topic of conversation and interest is profit margins. This annoying trend has been discussed in fits and starts — until this weekend, when the Artspace online magazine published Andrew Goldstein’s very long interview with the self-described “great collector” Stefan Simchowitz. (I’m one of his targets, though I don’t really care about that.) Simchowitz is a Hollywood producer and the co-founder of MediaVast, a photo-licensing service that he sold to Getty Images in 2007 for $200 million.

Simchowitz is nothing if not confident. Dispatch: Mexico. Hola, Mexico City! 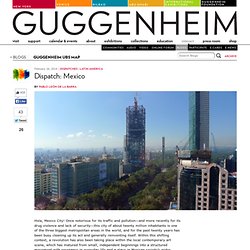 Once notorious for its traffic and pollution—and more recently for its drug violence and lack of security—this city of about twenty million inhabitants is one of the three biggest metropolitan areas in the world, and for the past twenty years has been busy cleaning up its act and generally reinventing itself. Within this shifting context, a revolution has also been taking place within the local contemporary art scene, which has matured from small, independent beginnings into a structured movement with resonance in everyday life and a place in Mexican society’s wider dialogue.

Shown here is Reforma Avenue, the city’s main drag, which reflects many of the changes happening within the city, as old buildings are replaced by high-rise crystal business towers, apartment buildings, and hotels. “Poor Mexico, so far from God and so close to the United States!” Like other institutions in Mexico, Museo Tamayo places a strong emphasis on exhibiting artists from Latin America. 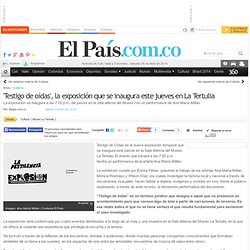 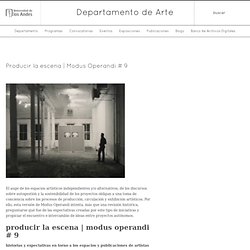 WhatsUpBuenosAires. By Carla Harms Barely a decade has passed since the urban arts scene in Buenos Aires really began to explode, and at the beginning of a new one the buzz continues to grow louder. Local businesses have long since picked up the trend, with a number arranging graffiti walking tours around the city, and documentary series like “Paredes que hablan” that offer intimate portraits of the city’s most prominent street artists to anyone with basic cable. International media stories and books published on the subject have also put Buenos Aires on the world map of the urban community. This explosion of graffiti and street art in the public eye is a testament not only to the nature of the art itself, but to the growing number of arts organizations focused on this growing minority within the art world. One of those organizations is Honeycomb, a bi-city community of artists dedicated to cultural exchange and providing new venues for exhibiting young contemporary artwork.