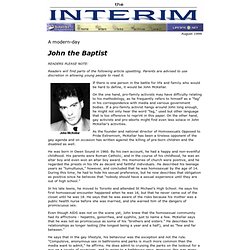 Parents are advised to use discretion in allowing young people to read it. If there is one person in the battle for life and family who would be hard to define, it would be John McKellar. On the one hand, pro-family activists may have difficulty relating to his methodology, as he frequently refers to himself as a "fag" in his correspondence with media and various government bodies.

If a pro-family activist hangs around John long enough, he might not only hear the word "fag," used but other language that is too offensive to reprint in this paper. As the founder and national director of Homosexuals Opposed to Pride Extremism, McKellar has been a tireless opponent of the gay agenda and on occasion has written against the killing of pre-born children and the disabled as well. He was born in Owen Sound in 1960.

In his late teens, he moved to Toronto and attended St Michael's High School. Tel Johnny in Toronto. The Irony of Same-sex Marriage Johnny. 1 Sheet Strategy. Johnny – The Silenced Voice of Reason in Canada’s Gay Community. The radical left in Canada continues shout out Conservatives on the same-sex marriage debate. 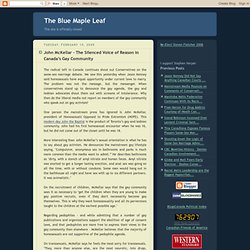 We saw this yesterday when Jason Kenney said homosexuals have equal opportunity under current laws to marry. The problem was not the message, but the messenger. When conservatives stand up to denounce the gay agenda, the gay and lesbian advocates shout them out with screams of intolerance. Why then do the liberal media not report on members of the gay community who speak out on gay activism? One person the mainstream press has ignored is John McKellar, president of Homosexuals Opposed to Pride Extremism (HOPE). More interesting than John McKellar’s sexual orientation is what he has to say about gay activism. On the recruitment of children, McKellar says that the gay community sees it as necessary to "get the children when they are young to make gay positive recruits, even if they don't necessarily become gay themselves. 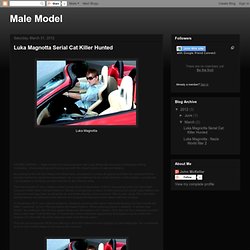 According to the UK Sun News, the films were uploaded in London England and then the suspect left the country before he could be interviewed. He is now believed to be in the Western United States, specifically Los Angeles or Arizona, he also has ties to the Toronto area. The first incident (1 boy 2 kittens video)) took place in December of 2010 according to the UK Daily Mail (Vacuum Kitten Killer Hunted Edition). Where a young man is seen on film placing two small baby kittens into a vacuum seal bag, then sucking the air out while playing John Lennons’ War is over song. In December 2011 new videos surfaced, allegedly showing the same individual feeding his four month old kitten “Jasmine” to his 17ft long Albino Burmese Python. 205 Munro Escort DUMP. 206 Munro DUMP closeup. Johnny Hope. A Strategyfor Turning the Sexuality Tide CHRISTIAN. 416-469-8144 - Toronto Ontario - Male Escort Phone Numbers - escort-phone.com/men.