Witchmarsh.tumblr.com. Games, Esports & Mobile Market Intelligence. Kingdom Come: Deliverance. IF Only: Text Adventures For People Who Hate Guessing The Verb. Emily Short is one of the world’s leading gurus on Interactive Fiction. 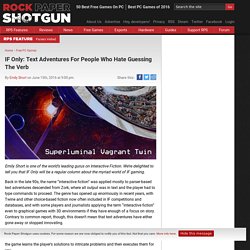 We’re delighted to tell you that IF Only will be a regular column about the myriad world of IF gaming. Back in the late 90s, the name “interactive fiction” was applied mostly to parser-based text adventures descended from Zork, where all output was in text and the player had to type commands to proceed. The genre has opened up enormously in recent years, with Twine and other choice-based fiction now often included in IF competitions and databases, and with some players and journalists applying the term “interactive fiction” even to graphical games with 3D environments if they have enough of a focus on story.

Contrary to common report, though, this doesn’t mean that text adventures have either gone away or stopped innovating. But there has also been a trend in the other direction, towards simplicity. Superluminal Vagrant Twin by C. Midnight. Lime Ergot. Rock, Paper, Shotgun - Part 2. Need to Know - The Surveillance Thriller Game. Home - Sea of Thieves. Why I Quit my Dream Job at Ubisoft. The Reality of AAA Games Development or: How I Learned to Stop Worrying and Go Indie Back in 2005, I remember my boss asking me where I’d see myself in 10 years. 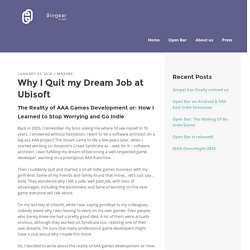 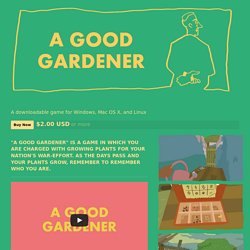 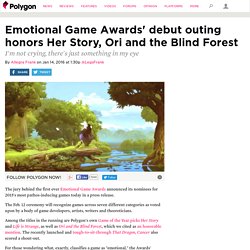 The Feb. 12 ceremony will recognize games across seven different categories as voted upon by a body of game developers, artists, writers and theoreticians. Among the titles in the running are Polygon's own Game of the Year picks Her Story and Life is Strange, as well as Ori and the Blind Forest, which we cited as an honorable mention. The recently launched and tough-to-sit-through That Dragon, Cancer also scored a shout-out. For those wondering what, exactly, classifies a game as "emotional," the Awards' official website offers clarification.

"Many scientific researches show how the emotional feeling of the players influences the quality of the immersion and the feeling of presence in the video games," the jury states on the homepage. You can find the full list of last year's most heartfelt releases below. Best Emotional Game Nominees.

Newest Questions - Arqade. How Long To Beat Your Steam Collection? BLAEO — Backlog Assassins Extraordinaire. Nifflas' Games. In Knytt Stories, each level is its own little adventure. 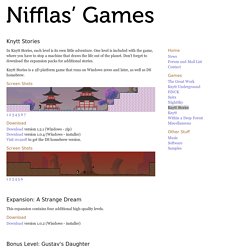 One level is included with the game, where you have to stop a machine that draws the life out of the planet. Don't forget to download the expansion packs for additional stories. Knytt Stories is a 2D platform game that runs on Windows 2000 and later, as well as DS homebrew. Screen Shots Download Download version 1.2.1 (Windows - zip)Download version 1.0.4 (Windows - installer)Visit rrc2soft to get the DS homebrew version. This expansion contains four additional high-quality levels. Download version 1.0.2 (Windows - installer) Nords: Heroes of the North - Official Game Page. SteamAccess - Every Steam Games for FREE. Brodding by icefix.

Download the latest indie games - itch.io. Horse Master: The Game of Horse Mastery by Tom McHenry. Fran Bow - Official demo by Killmonday Games. Fran Bow is a creepy adventure game that tells the story of Fran, a young girl struggling with a mental disorder and an unfair destiny. 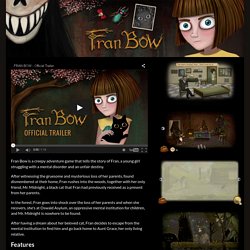 After witnessing the gruesome and mysterious loss of her parents, found dismembered at their home, Fran rushes into the woods, together with her only friend, Mr. Midnight, a black cat that Fran had previously received as a present from her parents. In the forest, Fran goes into shock over the loss of her parents and when she recovers, she's at Oswald Asylum, an oppressive mental institution for children, and Mr. Disposable by Martin Cohen. Zzzz-zzzz-zzzz by SaintHeiser. Liberation, My Love by Newmark Software. Liberation, My Love is a digital game about analog analogies, destiny, patterns, synthesizers and ‡ϟ▲∃. 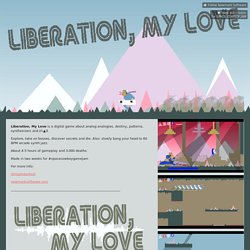 Explore, take on bosses, discover secrets and die. Also: slowly bang your head to 60 BPM arcade synth jazz. About 4-5 hours of gameplay and 3,000 deaths. Made in two weeks for #spacecowboygamejam. NipNip by Max Cordeiro // Cilerba. Ghostkeeper by spacetreasure.