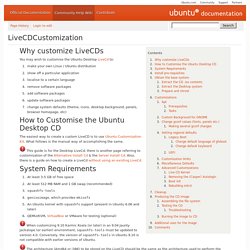 What follows is the manual way of accomplishing the same. This guide is for the Desktop LiveCd; there is another page referring to customisation of the Alternative Install Cd & the Server Install Cd. 10 Amazing and Mysterious Uses of (!) Symbol or Operator in Linux Commands. The '! 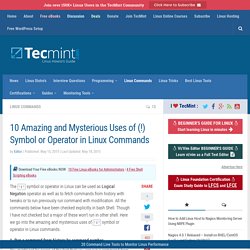 ' symbol or operator in Linux can be used as Logical Negation operator as well as to fetch commands from history with tweaks or to run previously run command with modification. All the commands below have been checked explicitly in bash Shell. Though I have not checked but a major of these won’t run in other shell. LiveCDCustomization. 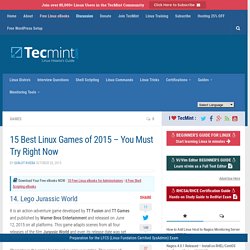 Lego Jurassic World It is an action-adventure game developed by TT Fusion and TT Games and published by Warner Bros Entertainment and released on June 12, 2015 on all platforms. This game adapts scenes from all four releases of the film Jurassic World and even its release date was set to coincide with that of Jurassic World. Character in the game has to solve various puzzles.

This series of game also enables two players cooperation mode. Apart from receiving mixed positive and negative reviews from critics and reviewers this game topped the charts of sale for the month of its release because of interest of huge masses in this exciting world of dinosaurs. 15. Create Your Own Streaming Service With Emby. Figure 1: Configure Emby user. 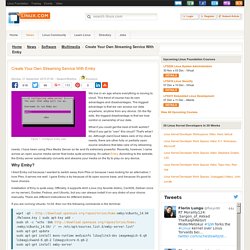 We live in an age where everything is moving to cloud. Index of /getdeb/ubuntu/dists. How to Kill Linux Processes/Unresponsive Applications Using 'xkill' Command. How do we kill a resource/process in Linux? 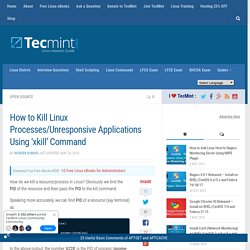 Obviously we find the PID of the resource and then pass the PID to the kill command. Speaking more accurately, we can find PID of a resource (say terminal) as: Oldest_software_rivalry_emacs_and_vi_two_text_editors_used_by_programmers. Courtesy of GNU Emacs In a world where both software and hardware frequently become obsolete right on release, two rival programs can stake a claim to being among the longest-lived applications of all time. 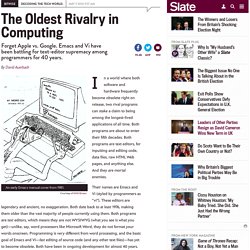 Both programs are about to enter their fifth decades. Both programs are text editors, for inputting and editing code, data files, raw HTML Web pages, and anything else. And they are mortal enemies. Useful Commands to Create Commandline Chat Server and Remove Unwanted Packages in Linux. Here we are with the next part of Linux Command Line Tips and Tricks. 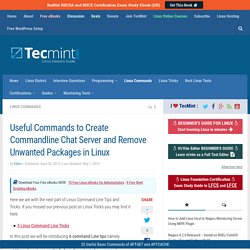 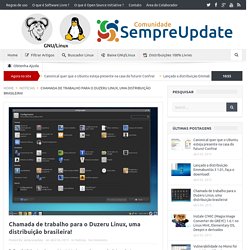 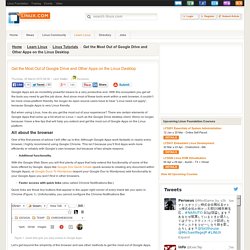 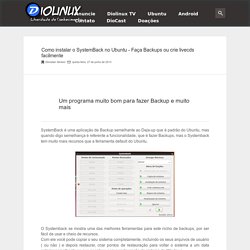 O Systemback se mostra uma das melhores ferramentas para este nicho de backups, por ser fácil de usar e cheio de recursos. 20 Netstat Commands for Linux Network Management. Netstat (network statistics) is a command line tool for monitoring network connections both incoming and outgoing as well as viewing routing tables, interface statistics etc. netstat is available on all Unix-like Operating Systems and also available on Windows OS as well. It is very useful in terms of network troubleshooting and performance measurement. netstat is one of the most basic network service debugging tools, telling you what ports are open and whether any programs are listening on ports. This tool is very important and much useful for Linux network administrators as well as system administrators to monitor and troubleshoot their network related problems and determine network traffic performance. This article shows usages of netstat command with their examples which may be useful in daily operation.You might also be interested in following article 35 Practical Examples of Linux Find Command.

Fish shell. Convert Audio CDs into Flac, Wav, MP3, Oga Format in Ubuntu 10.04 Lucid Lynx. This brief tutorial will show you how to easily convert your audio files into Flac, Wav, MP3, AAC (MP4) with Gnac Audio Converter. Gnac is a fantastic program that lets you convert one audio format into another. In this tutorial, I’ll show you how to install Gnac and begin converting your audio collections. Getting started: To get started, go to Applications –> Ubuntu Software Center. Then click ‘Edit –> Software Sources…’ Next, select ‘Other Software’ tab and click Add. Welcome – SUSE Studio. Mahmahnds on Faiya: How to create a Linux LiveUSB without Unetbootin. If you've been introduced to Linux by a hardcore fan, or just been adventuring yourself for a while now, chances are you've ran into a piece of software called UNetbootIn. It stands for "Universal Netboot Installer," but what it really does is create bootable USB drives from Linux CD images (.iso).

Prey Anti Theft: Track & find stolen Phones, Tablets and Laptops. Linux kernel Programming tutorial. Top 10 GNOME Shell Themes. Webcam. This document describes how to choose, setup and use a webcam in Ubuntu. 10 Of The Best Gnome Shell Extensions. Ever since Gnome started the extensions site where developers can submit their extensions to the library, there have been a great number of useful extensions that appear in the list.

With the new extension site, installation of extensions is simply a mouse click. Gone are the days where we still need to add a custom repository just to install an extension. Extensions. Elementary OS. Cinnamon 1.8 released : Cinnamon. Cairo Dock 3.2.1 Released with fixes, Install it in Ubuntu 13.04/12.10/12.04/Linux Mint. Install Cairo Dock 3.2.1 in Ubuntu 13.04 Raring/Ubuntu 12.10 Quantal/Ubuntu 12.04 Precise/11.10 Oneiric/11.04 Natty/10.10 Maverick/10.04 Lucid/Linux Mint (New Release) Cairo-Dock, a fast and customizable desktop interface which can be used as alternative or addition to Unity, Gnome-Shell, Xfce-panel, and KDE-panel, is now at version 3.2.1.