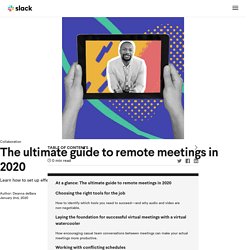 Online meetings may be a normal part of a team’s everyday workflow, but how to make them maximally efficient can be a bit of a head-scratcher: What’s the best virtual meeting tool to use? And how do you make sure you cover everything that needs covering before everyone hangs up or disconnects? If running a virtual meeting feels like one big question mark, don’t sweat it. Let’s take a look at everything you need to know about running effective remote meetings with distributed teams. By submitting this newsletter request, I consent to Slack US sending me marketing communication via email. Choosing the right online meeting tool for your remote team meeting. How to Combat Zoom Fatigue. Why do we find video calls so draining? 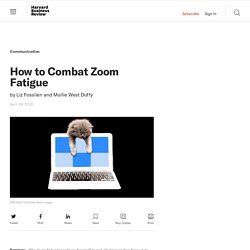 In part, it’s because they force us to focus more intently on conversations in order to absorb information. Feeling video-conference fatigue? You’re not alone. If you’re working remotely, you’ve probably heard at least one “Brady Bunch" reference during an online meeting by now. 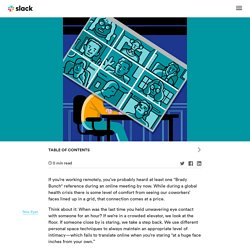 While during a global health crisis there is some level of comfort from seeing our coworkers’ faces lined up in a grid, that connection comes at a price. Think about it: When was the last time you held unwavering eye contact with someone for an hour? If we’re in a crowded elevator, we look at the floor. If someone close by is staring, we take a step back. Three Cures For Virtual Meeting Fatigue, According to New Microsoft Research. The pandemic lockdowns put in place to fight the spread of the coronavirus have accelerated the already growing trend of holding virtual meetings. 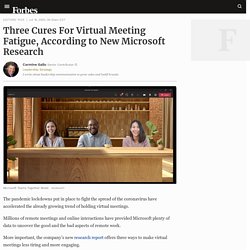 According to Microsoft’s research, “Brainwave patterns associated with stress and overwork were much higher when collaborating remotely than in-person.” Simply put, we didn’t evolve to spend eight hours a day speaking to people on a screen. Immersive Virtual Worlds as Innovation Platforms. By: Jeffrey Phillips Can you improve the innovation process as well as reducing the cost of engaging with users, developing new ideas and prototyping and testing solutions by making use of virtual environments? 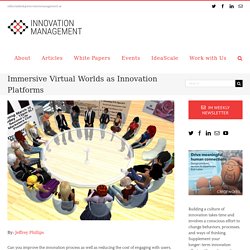 Jeffrey Philips and Jena Ball point the way. Innovation thrives when creative people meet, exchange ideas in a relatively safe environment and quickly prototype their ideas with little cost. Immersive experiences like gaming platforms or Second Life offer exceptionally valuable innovation platforms for addressing these requirements and more. We recently completed an innovation effort to consider the expectations and requirements of retail spaces in the near future, and we used Second Life as a platform to generate ideas, rapidly prototype new concepts and to conduct role-play to test the results. Videovergaderen doet pijn aan je brein. Zo gaat het beter. (1) LinkedIn. Streem Launches SDK For Developing AR Apps And Solutions For Remote Collaboration And Customer Support.

Ceraadi Teams Up With AmazeVR For A Fall Virtual Reality Concert. Event App & Matchmaking & Virtual Events, powered by AI - Swapcard. 'The Under Presents' Hosting Live Theatrical Performances Of Shakespeare's 'Tempest' On Oculus Headsets. Interact with a live actor in this 40-minute immersive reimagining of the 1692 classic. 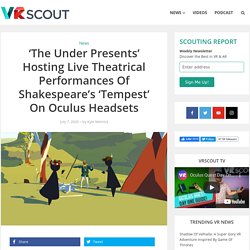 Since launching on Oculus Rift and Oculus Quest this past November, Tender Claws’ The Under Presents has featured a number of live performances as part of its ongoing immersive theater series, including a live Variety Hour held every Friday and Saturday featuring an eclectic assortment of performances by stand-ups comedians, musicians, and other talented acts. This week Tender Claws and Oculus Studios revealed yet another addition to their lineup of live VR performances.

Beginning July 9th, players can log into The Under Presents to catch a limited time interactive retelling of William Shakespeare’s famous play, Tempest. Lasting approximately 40 minutes, groups of six to eight players follow a live actor sheltering in place due to COVID-19 as they deliver a private rendition for the show that will have them actively participating in the story and its events.

Image Credit: Tender Claws. Remote Collaboration And Virtual Conferences, The Future Of Work. Ten weeks ago, Jesse Damiani, writing on Forbes.com, told the story of a college professor who turned his course about XR into a research project about remote collaboration and virtual conferences. 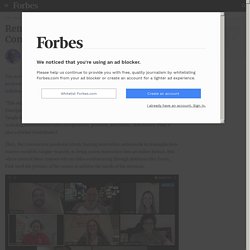 “This semester, Chapman University offered an experimental class called “Landscape of Emerging Media” through Dodge College, Chapman’s school for film and media studies. Taught by Charlie Fink, it was intended to introduce students to the XR industry, including conversations with entrepreneurs, pioneers, and artists. (Disclosure: Fink is also a Forbes Contributor). Then, the Coronavirus pandemic struck, forcing universities nationwide to reimagine how courses would be taught—namely, to bring course instruction into an online format. But where most of these courses rely on video-conferencing through platforms like Zoom, Fink used the premise of the course to address the needs of the moment. Sansar: Lost Horizon reaches an audience of 4.3 million. 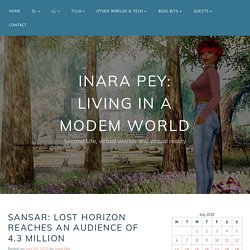 It’s an event I’ve covered a couple of times of late in these pages (see Glastonbury in Sansar: post event observations and Sansar and VRJAM: of Lost Horizon and music festivals), which in turn offer my own thoughts as an observer of the event both in-world and out-world, and the longer-terms hopes for Sansar, VRJam and the Lost Horizons event banner. Untitled.space – Connecting teams in VR. 2020 Global Human Capital Trends. Virtual Career Fair Platform. Fairtualtechnologies. Professoren Goossens en Van Ranst: "Draconische maatregelen zijn nodig, zoals alle evenementen schrappen" VR Takes The Stage As Conferences Cancel. It started with the cancellation of Mobile World Congress, one of the biggest international tech shows of the year. 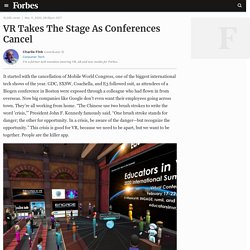 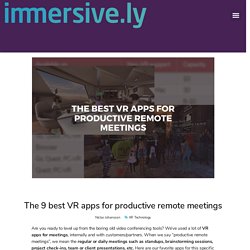 Virtual Reality (VR) – Collaboration / Multi-User – Tools – Immersive Learning News. Virtual Reality at Home Boosted During Coronavirus. WoodenStreet furniture startup is investing half a million dollars on virtual reality. Online furniture startup is rolling out measures like touch-free store policy, and 3D services and sanitized supply chain. The startup said that it will invest $500,000 (₹38 million) on its stores for the post-Coronavirus world. This includes virtual contact-less services, virtual reality walkthroughs of a customer’s home via smartphones. To regulate supply chains, it will train the artisans and delivery teams as per the standards. Mozilla Hubs Cloud is the foundation of the free metaverse. Virtual events and meetings are the topic of the moment. The World's Biggest Social Virtual Reality Gathering Is Happening Right Now.

It’s one of the most under-appreciated science fiction films of the past decade, but Luc Besson’s Valerian and the City of a Thousand Planets (also the most expensive independent film ever made) subtly depicts a compelling vision for the way tools like augmented and virtual reality devices may intersect with the future of online shopping. The scene takes place in Big Market, a massive inter-dimensional marketplace consisting of more than a million shops. Virtual Reality Concert In Helsinki Attracts Over 1 Million Spectators. A virtual reality concert in Helsinki has attracted over one million spectators, as the coronavirus thwarted Finland’s usual May Day celebrations this year.

Headlined by Finnish rap group JVG, the virtual gig saw a total of 12% of Finland’s population tune in, while almost 150,000 viewers went so far as to create virtual avatars for themselves. Developed as part of a wider Virtual Helsinki tourist initiative, the virtual May Day celebrations provide perhaps the biggest example yet of the potential of virtual reality concerts and virtual tourism. Held on the evening of Thursday April 30, over 700,000 Finnish residents “attended” the virtual gig, featuring one of the most popular bands in Finland, JVG, who performed in Helsinki’s Senate Square.

The locals were then joined by “virtual tourists” from such nations as the U.S., the U.K., Germany and Sweden, increasing the total viewer count to a whopping 1.4 million. IJsland wint virtueel Eurovisiesongfestival, België eindigt ... Forget Zoom: Virtual Reality Set To Be The Future of Group Chats. Picture this: After a long day of work, you walk to your favorite bar and slide into the corner booth where your friends are waiting. Or, you and a coworker take an afternoon stroll down a busy street in the summer sun while talking about a new project. Thanks to the coronavirus, this may seem impossible.

But it’s not. Forget happy hours, dance parties, and distance learning over video conferencing apps — where everyone is two dimensional and talking over each other: Virtual reality may just be the new Zoom. Why the Music Business Should Be Looking Closely at Fortnite. Spatial Opens VR/AR Collaboration Platform to all, From Smartphones to Oculus Quest. Spatial has been developing its combined virtual and augmented reality (VR/AR) collaboration platform for a while now, looking to help teams work together no matter where they are or what platform they’re on. Online vermoeidheid: 5 oorzaken en 3 interventies om het te vermijden - Levuur. Virtual reality fashion shows be the future? Facebook to Start Accepting Collaboration & Productivity Apps on Oculus Quest.