62940_Kumar.pdf?utm_content=buffere4cc7&utm_medium=social&utm_source=twitter. Witter / ? Pavlinka Kovatcheva on Twitter: "#UJ #socialmedia for #research workshop #UJLibrary. The presenters @carinavr @AntheaPaelo @ujlibscience. @UJLibrary. How to write paragraphs — Advice for authoring a PhD or academic book. In English the core building blocks of any intellectual or research argument are paragraphs. 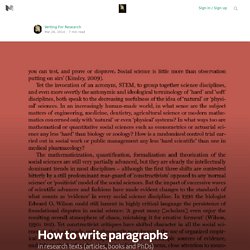 Each paragraphs should be a single unit of thought, a discrete package of ideas composed of closely linked sentences. The most generally applicable sequence to follow is — Topic, Body, Tokens, Wrap. 29 Awesome Things You Didn't Know About Google (But Should) What would the internet be without Google? 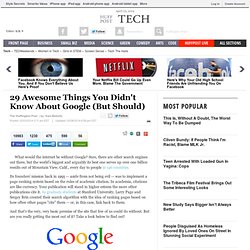 Sure, there are other search engines out there, but the world's biggest and arguably its best one serves up over one billion results out of Mountain View, Calif., every day to people in 146 countries. Its founders' mission back in 1995 -- aside from not being evil -- was to implement a page ranking system based on the rules of academic citation. In academia, citations are like currency. Your publication will stand in higher esteem the more other publications cite it. As graduate students at Stanford University, Larry Page and Sergey Brin created their search algorithm with the idea of ranking pages based on how often other pages "cite" them -- or, in this case, link back to them.

The A to Z of Social Media for Academia. Sadness and supervision. Users%20narcissism%20and%20control. Mixed Methods Research in Strategic Management. How many qualitative interviews is enough - NCRM EPrints Repository. 5 rookie researcher mistakes. How to Get the Most out of a Conference. MS-Word version -- PDF Version EDUCAUSE has this habit of creating placeholders for its posts and then sending RSS feeds composed solely of those placeholders. 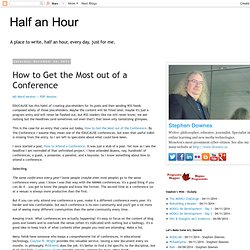 Maybe the content will be filled later, maybe it's just a program entry and will never be fleshed out, but RSS readers like me will never know; we see nothing but the headlines (and sometimes not even that!) That leave only tantalizing glimpses. 'Research suffers if scientists are forced to marry for money' Conference delegates bemoan funding system that breeds 'networks of mediocrity'. 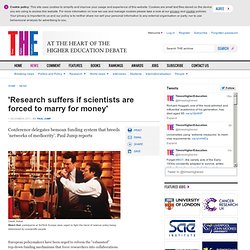 Paul Jump reports Credit: Kobal Watch that: participants at SciTech Europe were urged to fight the trend of science policy being determined by unscientific people European policymakers have been urged to reform the "exhausted" top-down funding mechanisms that force researchers into collaborations. Enric Banda, president of Euroscience, which works to advance science and technology across Europe, told the SciTech Europe conference in Brussels last week that collaboration worked best when researchers determined their own projects and chose their partners as appropriate. Zotero vs. EndNote – ProfHacker - Blogs. We here at ProfHacker are big fans of Zotero. 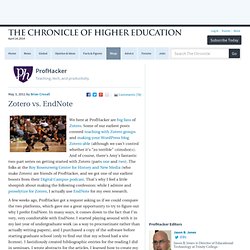 Some of our earliest posts covered teaching with Zotero groups and making your WordPress blog Zotero-able (although we can’t control whether it’s “zo terrible” <rimshot>). And of course, there’s Amy’s fantastic two-part series on getting started with Zotero (parts one and two). The folks at the Roy Rosenzweig Center for History and New Media (who make Zotero) are friends of ProfHacker, and we got one of our earliest boosts from their Digital Campus podcast.

That’s why I feel a little sheepish about making the following confession: while I admire and proselytize for Zotero, I actually use EndNote for my own research. A few weeks ago, ProfHacker got a request asking us if we could compare the two platforms, which gave me a great opportunity to try to figure out why I prefer EndNote. Prezi - The Zooming Presentation Editor. Best Abstract on a Scientific Paper Ever? - Ideas Market. Public Data Explorer. Zotero. Zotero /zoʊˈtɛroʊ/ is free and open-source reference management software to manage bibliographic data and related research materials (such as PDF files). 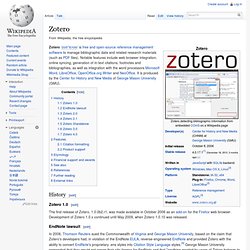 Notable features include web browser integration, online syncing, generation of in-text citations, footnotes and bibliographies, as well as integration with the word processors Microsoft Word, LibreOffice, OpenOffice.org Writer and NeoOffice. It is produced by the Center for History and New Media of George Mason University (GMU). History[edit] Zotero 1.0[edit] RefWorks. Functionality and features[edit] Users' reference databases are stored online, allowing them to be accessed and updated from any computer with an internet connection. 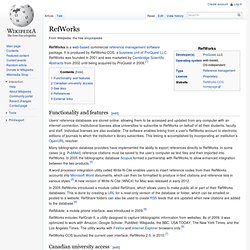 EndNote. EndNote is a commercial reference management software package, used to manage bibliographies and references when writing essays and articles. 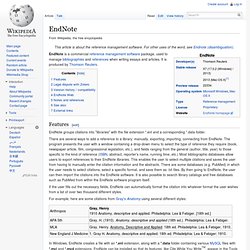 It is produced by Thomson Reuters. Features[edit] EndNote groups citations into "libraries" with the file extension *.enl and a corresponding *.data folder. There are several ways to add a reference to a library: manually, exporting, importing, connecting from EndNote. The program presents the user with a window containing a drop-down menu to select the type of reference they require (book, newspaper article, film, congressional legislation, etc.), and fields ranging from the general (author, title, year) to those specific to the kind of reference (ISBN, abstract, reporter's name, running time, etc.) Mendeley. Mendeley is a desktop and web program for managing and sharing research papers,[2] discovering research data and collaborating online. 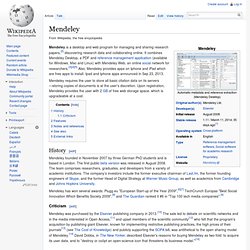 It combines Mendeley Desktop, a PDF and reference management application (available for Windows, Mac and Linux) with Mendeley Web, an online social network for researchers.[3][4][5] Also, Mendeley provides apps on Iphone and iPad which are free apps to install. Ipad and Iphone apps announced in Sep 23, 2013. Mendeley requires the user to store all basic citation data on its servers—storing copies of documents is at the user's discretion. Upon registration, Mendeley provides the user with 2 GB of free web storage space, which is upgradeable at a cost. History[edit] Mendeley founded in November 2007 by three German PhD students and is based in London. Social Bookmarking in Plain English - Transcription in progress.

RSS in Plain English - 54 Translation. What the *Tweet*? Social Media for Grad Students by Melonie Fullick on Prezi.