Buy online, pickup in-store increasing in popularity. Buying products online and picking them up in-store is becoming increasingly popular as retailers head into the holiday season. 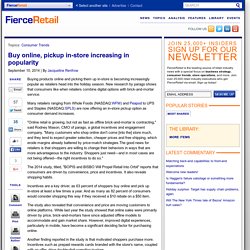 New research by parago shows that consumers like when retailers combine digital options with brick-and-mortar service. Many retailers ranging from Whole Foods (NASDAQ:WFM) and Peapod to UPS and Staples (NASDAQ:SPLS) are now offering an in-store pickup option as consumer demand increases. "Online retail is growing, but not as fast as offline brick-and-mortar is contracting," said Rodney Mason, CMO of parago, a global incentives and engagement company. "Many customers who shop online don't come [into the] store much, and they tend to expect greater selection, cheaper prices and free shipping, which erode margins already battered by price-match strategies.The good news for retailers is that shoppers are willing to change their behaviors in ways that are more advantageous to the industry. 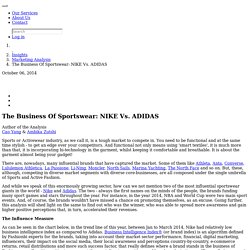 You need to be functional and at the same time stylish - to get an edge over your competitors. And functional not only means using 'smart textiles', it is much more than that, it is incorporating hi-technology in the garment, whilst keeping it comfortable and breathable. It is about the garment almost being your gadget! There are, nowadays, many influential brands that have captured the market. Nike vs Adidas: a league of their own. The World Cup of football may be over for another four years, but there’s one global sporting battle that never stops – the eternal war between Nike and Adidas for the hearts, minds and pockets of sports fans and consumers worldwide. It’s a contest fought across many sports besides football, and the protagonists are engaged across several venues at once: in laboratories, on television, online, in sponsorship deals, via quirky marketing campaigns, on the high-street and on every playing field on the planet, from local parks to the Camp Nou.

Between them the two leading brands command a value of more than $25bn. Over the years they have carved up their own territories – Nike in the Americas and Adidas in Europe and Asia. But that’s now changing as the two giant brands go head to head in a pitched battle for world domination. And, increasingly, the brands are clashing on the same turf. Even their marketing pitches summarise the nature of this all-out competition. Nike vs Adidas: a league of their own. Uk.businessinsider. Nike direct and indirect competitors. How Nike's marketing strategies helped it become a global brand. Photo: Vivan Mehra Executive Summary: Constant innovation has been the byword for Nike's success. 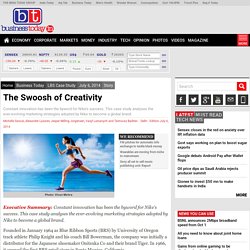 This case study analyses the ever-evolving marketing strategies adopted by Nike to become a global brand. Founded in January 1964 as Blue Ribbon Sports (BRS) by University of Oregon track athlete Philip Knight and his coach Bill Bowerman, the company was initially a distributor for the Japanese shoemaker Onitsuka Co and their brand Tiger. In 1966, it opened the first BRS retail store in Santa Monica, California. In those days, Bowerman would often rip apart the Tiger brand shoes to see how he could make them lighter and better.

The Brand Brief Behind Nike's Just Do It Campaign. Just Do It is an example of a brand campaign that tapped deeply into the authentic character of Nike’s brand values and brand purpose. 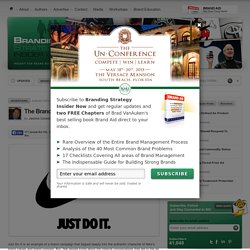 But, few people know about the internal conversations that led to the ad brief that went to Nike’s agency Wieden+Kennedy (W+K) to create the campaign. Until now. I was there, right in the middle of it. Today on Branding Strategy Insider I’ll share how it came to be. Let me begin with some context. Such a deep brand purpose can be described as the intersection of three circles of influence. 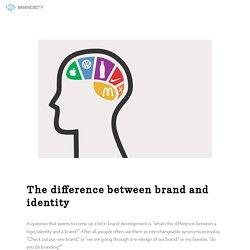 After all, people often use them as interchangeable synonyms everyday. “Check out our new brand,” or “we are going through a re-design of our brand,” or my favorite, “do you do branding?” To answer this question, let’s start with some definitions. What is a brand? Nike Brand Strategy: Using Emotional Branding in Nike Advertising. Look deep inside Nike’s brand strategy and you’ll find the classic story of the hero’s journey. 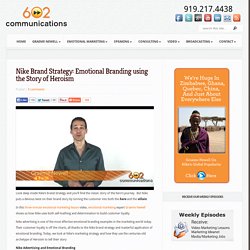 But Nike puts a devious twist on their brand story by turning the customer into both the hero and the villain. In this three-minute emotional marketing lesson video, emotional marketing expert Graeme Newell shows us how Nike uses both self-loathing and determination to build customer loyalty. Nike advertising is one of the most effective emotional branding examples in the marketing world today. Their customer loyalty is off the charts, all thanks to the Nike brand strategy and masterful application of emotional branding. 27 Years at Nike: "What I Learned about Branding"

Defining Brand Identity. We talk about brands all the time here. 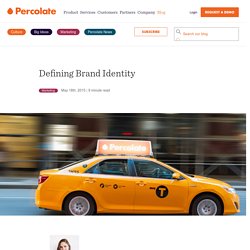 We’re fascinated with them, but it struck me recently that nowhere in all of the blog posts or white papers have we taken a moment to explicitly define the elements of brand. Doing so might explain our (healthy) obsession with brands and brand management. The dictionary definition falls short of explaining what “brand” means, so I’ll attempt to explain what we’re talking about. Nike branding and identity. 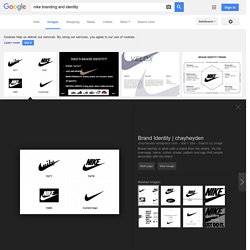 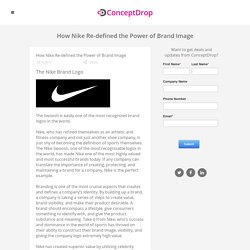 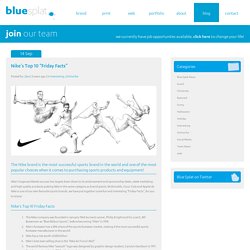 Nike Sustainability Timeline. 50 Things You Didn't Know About Nike. Over 50 years ago, on January 25th, 1964, Nike was born. Well, not Nike we as we know it, but on that date Phil Knight and Bill Bowerman founded Blue Ribbon Sports, which would eventually turn into the biggest athletic brand in the world.

With its roots on the campus of the University of Oregon—where Bowerman coached track and Knight ran for him—Nike would change the world of footwear and, eventually, turn a generation of consumers into "sneakerheads. " Uk.businessinsider. Nike turned 50 this year. To celebrate, a UK gym, My Fitness Boutique, has created this infographic to celebrate the shoe and apparel company's five decades in business. We've picked out some of the most interesting factlets from the infographic, and a few snippets from around the web, that many people may never have known about the world's most famous sports brand. 1.

M.fastcompany. When most people think of Nike, they think of superstar athletes like Michael Jordan, Mia Hamm, and Tiger Woods. When Nike's own employees think of their company, they think of a retired university track coach, an Olympic runner whose career ended tragically in a 1975 car crash, and a so-so athlete whose achievements as an entrepreneur far outpaced his accomplishments as a runner. Nike History and Timeline. Preliminary Information: Iconography Explained Nike's Heritage NIKE, pronounced NI-KEY, is the winged goddess of victory according to Greek mythology. She sat at the side of Zeus, the ruler of the Olympic pantheon, in Olympus. A mystical presence, symbolizing victorious encounters, NIKE presided over history's earliest battlefields.

A Brief History of Nike. Very few people and even fewer brands have managed to become synonymous with pop culture in the 20th century. About Nike - The official corporate website for NIKE, Inc. and its affiliate brands. Nike Sustainability Timeline.