Santorini Tourism Shows Promising Signs. The Formation of Santorini [VIDEO] 143 28Google +1 1 0 276 Thanks to technology we are able to witness how the beautiful Greek island of Santorini was formed over thousands of years. 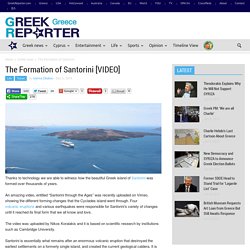 An amazing video, entitled “Santorini through the Ages” was recently uploaded on Vimeo, showing the different forming changes that the Cyclades island went through. Four volcanic eruptions and various earthquakes were responsible for Santorini’s variety of changes until it reached its final form that we all know and love. The video was uploaded by Nikos Koralakis and it is based on scientific research by institutions such as Cambridge University.

Santorini is essentially what remains after an enormous volcanic eruption that destroyed the earliest settlements on a formerly single island, and created the current geological caldera. Santorini and Crete among top hotel destinations. 3 Greek Hotels Among Europe's Top 25. 160 51Google +0 0 0 279 The Australian Business Insider published a list of the Top 25 hotels in Europe, based on critiques and awards received from well-established travel websites, such as Travel + Leisure, Fodor and TripAdvisor. 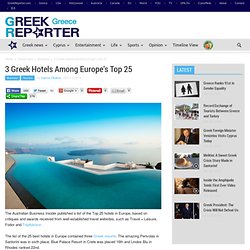 The list of the 25 best hotels in Europe contained three Greek resorts. The amazing Perivolas in Santorini was in sixth place, Blue Palace Resort in Crete was placed 16th and Lindos Blu in Rhodes ranked 22nd. A Growth in Visitors to Greece. Recent data this week reported that the first half of 2013 has seen in total a 10% growth in visitors to Greece compared to the same period as last year. 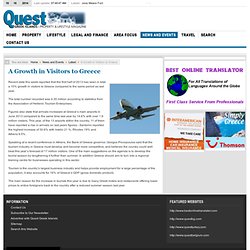 The total number recorded was 4.35 million according to statistics from the Association of Hellenic Tourism Enterprises. Figures also state that arrivals increased at Greece’s main airports in June 2013 compared to the same time last year by 14.6% with over 1.9 million visitors. This year, of the 13 airports within the country, 11 of them have reported a rise in arrivals on last years figures - Santorini reported the highest increase of 30.6% with Iraklio 21 %, Rhodes 19% and Athens 9.5%. Top Ten Destinations in Greece - Greece for Visitors Travel Information. Skip these and people back home will wonder if you really went Here we go - the basic "must-see" list for first-time visitors to Greece. 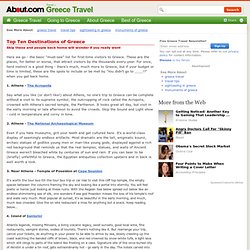 These are the places, for better or worse, that attract visitors by the thousands every year. For once, herd instinct is a good thing - there's much, much more to Greece, but if your budget or time is limited, these are the spots to include or be met by "You didn't go to ____!? " when you get back home. 1. Say what you like (or don't like!) 2. Even if you hate museums, grit your teeth and get cultured here. 3. It's worth the tour bus tth the tour bus trip or car ride to visit this cliff top temple, the empty spaces between the columns framing the sky and looking like a portal into eternity. 4. 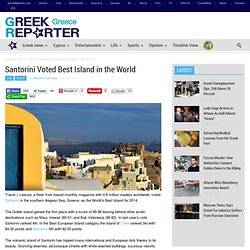 The Greek island gained the first place with a score of 89.98 leaving behind other exotic destinations such as Maui, Hawaii (89.51) and Bali, Indonesia (86.82). Electric Vehicle Test Drive in Santorini. 21 16Google +0 0 1 59 Visitors of the picturesque island of Santorini, Greece, had the chance to admire not only the island’s famous sunset but also test drive the Greek electric vehicle “Sunnyclist.” 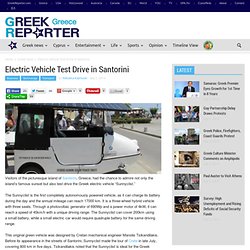 The Sunnyclist is the first completely autonomously powered vehicle, as it can charge its battery during the day and the annual mileage can reach 17000 km. It is a three-wheel hybrid vehicle with three seats. Through a photovoltaic generator of 690Wp and a power motor of 4kW, it can reach a speed of 45km/h with a unique driving range. The Sunnyclist can cover 200km using a small battery, while a small electric car would require quadruple battery for the same driving range.

This original green vehicle was designed by Cretan mechanical engineer Manolis Tsikandilakis. Greece update: is now a good time to visit? Anyone contemplating a trip to Greece is almost certainly aware of the news rocking airwaves and broadsheets around the world, chronicling Greece’s economic and political woes. 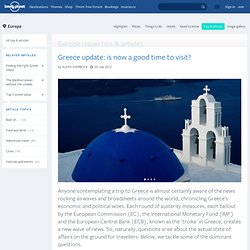 Each round of austerity measures, each bailout by the European Commission (EC), the International Monetary Fund (IMF) and the European Central Bank (ECB), known as the 'troika' in Greece, creates a new wave of news. So, naturally, questions arise about the actual state of affairs on the ground for travellers. Below, we tackle some of the dominant questions. Is Greece a good place to visit this summer? The resounding answer is yes! What should I expect when I get there? Even Athens and other large cities, which have been hardest hit by the crisis and the reactions to it, are relatively peaceful. Is there anything I should do differently? While there have been numerous protests and strikes during the last few years, they primarily impact central Athens.

Related:  ARCHEOLOGY DIRECTORY   -  Foreign Places We want to Go   -  Miscellaneous   -  Places I would like to visit   -  Education   -  Enterprise