America&#039;s Got Talent - Great gymnastic girl abilities. What really is back tension? - ArcheryTalk Forum: Target &amp; Bowhunting Chat. Back tension archery. Article: Keys to a steady aim.(FullDraw) Get a Grip - Gripping the Bow. With Dr. 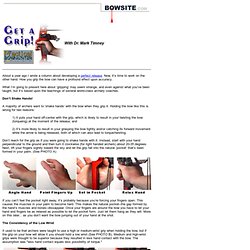 Mark Timney About a year ago I wrote a column about developing a perfect release. Now, it’s time to work on the other hand. How you grip the bow can have a profound effect upon accuracy. What I’m going to present here about ‘gripping’ may seem strange, and even against what you’ve been taught, but it’s based upon the teachings of several world-class archery coaches. Don’t Shake Hands! A majority of archers want to ‘shake hands’ with the bow when they grip it.

Don’t reach for the grip as if you were going to shake hands with it. If you can’t feel the pocket right away, it’s probably because you’re forcing your fingers open. The Consistency of the Low Wrist It used to be that archers were taught to use a high or medium-wrist grip when holding the bow, but if the grip on your bow will allow it you should hold a low wrist (See PHOTO B). While there is something to this line of thinking, a low wrist is much more ‘repeatable’ than a high or medium wrist. Form question - ArcheryTalk Forum: Target &amp; Bowhunting Chat. Help choosing target arrows - ArcheryTalk Forum: Target &amp; Bowhunting Chat. Bowhunting Videos and Video Clips - Get A Grip. FOC Balance Point. Arrow balance point presents us with some tradeoffs. 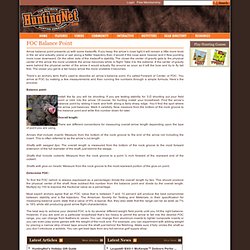 If you keep the arrow’s nose light it will remain a little more level in the air and actually plane or sail along a flatter trajectory than it would if the nose were heavier and it flew pointing more nose downward. On the other side of the tradeoff is stability. The closer the center of gravity gets to the physical center of the arrow the more unstable the arrow becomes while in flight. Take it to the extreme. If the center of gravity were behind the physical center of the arrow it would actually flip around as soon as it left the bow and try to fly tail first. There’s an archery term that’s used to describe an arrow’s balance point. Install the tip you will be shooting. Overall length: There are different conventions for measuring overall arrow length depending upon the type of point you are using. Carbon vs. Aluminum arrows. 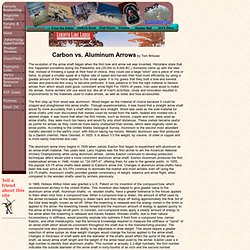 Aluminum Arrows by Tom Brissee The evolution of the arrow shaft began when the first bow and arrow set was invented. Historians state that this happened sometime during the Paleolithic era (35,000 to 8,000 BC.) Someone came up with the idea that, instead of throwing a spear at their food of choice, they could use a large "stick" and a piece of vine or twine, to propel a smaller spear at a higher rate of speed and harvest their food more efficiently by using a greater amount of the force applied to this small spear. It is my guess that they built a bow and several arrows and practiced like crazy to become proficient. The first step up from wood was aluminum. The aluminum arrow story begins in 1939 when James Easton first began to experiment with aluminum as an arrow-shaft material.

In 1969, Holless Wilbur Allen was granted a U.S. Now that we have an idea of arrow flight characteristics let's look at the advantages of shaft materials. Compound Bow Selection Guide - HuntersFriend.COM. Let's start at the top. 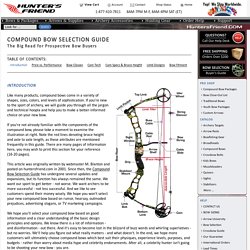 Undoubtedly, the modern compound bow is a fantastic hunting weapon. Modern compound bows are now capable of delivering more KE to a target than a .25 ACP Bullet. Awesome! But let's try to keep things in some reasonable perspective. The compound bow is still a relatively low-tech product - despite all the industry yammer about cutting-edge technologies and predatory bliss. However, most bows are specifically marketed as a "high-technology" product. Don't be too eager to embrace every technological-sounding feature as a must have innovation. YOU MAY BE UNDER THE INFLUENCE OF A MIND-ALTERING DEVICE: The archery industry is often plagued by a "better than your bow" mentality - as brand loyalty sometimes gets out of hand. 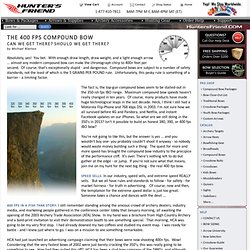 SHOULD WE GET THERE? By Michael Blanton Absolutely, yes! You bet. With enough draw length, draw weight, and a light enough arrow ... almost any modern compound bow can make the chronograph chirp to 400+ feet per second. The fact is, the top-gun compound bows seem to be stalled-out in the 350-ish fps IBO range. You're not going to like this, but the answer is yes ... and you wouldn't buy one- you probably couldn't shoot it anyway - so nobody would waste money building such a thing. SPEED SELLS: In our industry, speed sells, and extreme speed REALLY sells. 400 FPS IN A FISH TANK STORY: I still remember standing among the anxious crowd of archery dealers, industry media, and marketing people gathered in the conference center lobby that January morning, all awaiting the opening of the 2003 Archery Trade Association (ATA) Show.

HCA had just launched an advertising campaign claiming that their bows were now shooting 400+ fps. HCA had things ready and waiting. But wait!