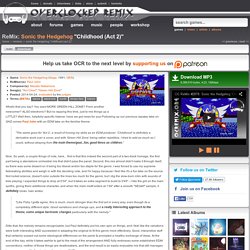 You want MORE GREEN HILL ZONE? From another newcomer? ALSO electronic? Tekken Tag Tournament 2 "Get Ready for the Next Battle!" - OC ReMix. In case you missed it over the weekend, Apex 2014: A New Challenger!! 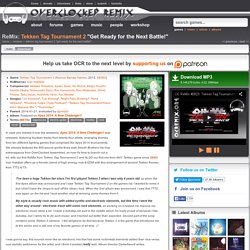 Was released, featuring fourteen tracks from twenty-four artists, arranging themes from ten different fighting games that comprised the Apex 2014 tournaments. We already featured the 800-pound gorilla three-part Smash Brothers hip-hop extravaganza from OverClocked Assembled, so now it's time to branch out a bit, with our first ReMix from Tekken Tag Tournament 2 and ALSO our first mix from ANY Tekken game since 2002! Ivan Hakštok offers up a frenetic blend of high-energy rock & EDM with this arrangement of several Tekken themes from TTT2 & T3: Final Fantasy VII 'The Twelfth Commandment' Wild Arms 'Return to Dust' 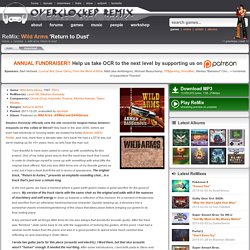 Way back in the year 2000, before we even had electricity or running water, we posted his funky Batman (NES) ReMix, and now, more than a decade later, he's back! He had a LOT to say, but we're making up for 10+ years, here, so let's hear the man out: "I am thankful to have been asked to come up with something for this project. One of my initial goals was to find the most lean track that I could, in order to challenge myself to come up with something with what little the original track offered. Not only was Wild Arms one of my favorite games as a kid, but it had a track that fit the bill in terms of sparseness.

Definitely one of the most liberal arrangements on the album, Stephen has fortunately still colored in the lines enough; much connectivity relies on an extended choral sample, but the transmogrification really is quite stellar. Star Ocean 'Summertime' So, hopefully you've been enjoying The Dark Side of Phobos the past couple days - torrent's been rather healthy, that's for sure. 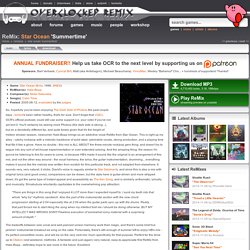 Don't forget that VGDJ, OCR's official podcast, could still use some support (i.e. your vote) if you've not yet lent it. You'll certainly be seeing more Phobos (the dark side is strong...), but on a decidedly different tip, and quite timely given that it's the height of meteor shower season, newcomer Hale-Bopp brings us an addictive vocal ReMix from Star Ocean. This is right up my alley - catchy rock/pop with a melodic backbone of solid steel, admirable vocals, strong production, and a playing time that fits it like a glove.

Have no doubts - this mix is ALL ABOUT the three-minute rock/pop gem thing, and doesn't try to segue into any sort of art-house experimentation or over-extended soloing. "There are things in this song that I enjoyed A LOT more than I expected myself to. Emunator on 2009-12-19 03:30:37. Silent Hill 2 'Halo of the Sun' From newcomer Jake Simons, aka D.L. 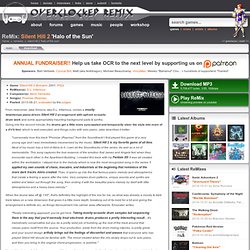 Infamous, comes a mostly downtempo piano-driven Silent Hill 2 arrangement with upfront acoustic drum work and some appropriately haunting background pads & synths. Going into the second minute, the drums get a little more syncopated and temporarily steer the style into more of a d'n'b feel, which is well-executed, and things outro with solo piano; Jake describes it better: "I personally love this track "Promise (Reprise)" from the Soundtrack! I first played this game at a very young age and I was immediately mesmerized by the music. Silent Hill 2 is my favorite game of all time. When the drums take off @ 1'45", that's definitely the highlight of the mix for me, as what was already a moody & dark track takes on a new dimension that gives it a little more depth, breaking out of its mold for a bit and giving the arrangement a definite arc, as things denouement into calmer seas afterwards. Metal Gear 'First Impressions'

DiscoDan steers away from his stream of MegaMan ReMixes, and with good results, in this moody techno Metal Gear piece with bubbly reverbed synth lines and some very well-done running snare patterns. 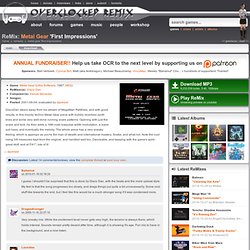 Opening with just the snare and kick, he then adds a 16th-note lowpulse-wdith modulation, a lower sub bass, and eventually the melody. The whole piece has a very sneaky feeling, which is appropo as you're the man of stealth and international mystery, Snake, and what not. Note the cool rising 3/8 measures kept from the original, and handled well too. Castlevania: Bloodlines 'Prussian Bones' Need EVEN MORE Castlevania this Halloween? 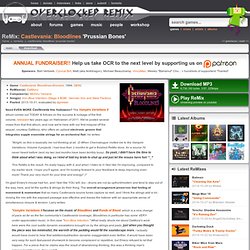 The Vampire Variations II album comes out TODAY & follows on the success & rockage of the first volume, released two years ago on Halloween of 2011. We've posted several mixes from that first album, and now we're here with our first mixpost off the sequel, courtesy DaMonz, who offers an upbeat electronic groove that integrates supple ensemble strings for an orchestral flair; he writes: "Alright, so this is basically me not thinking at all.

:D When Chernabogue invited me to the Vampire Variations: Volume II projects, I had less than 2 months to get a finished ReMix done, for a source I'd never heard before (and my two last months have been terribly busy). So yeah, I didn't have the time to think about what I was doing, so I kind of told my brain to shut up and just let the mouse have fun! Final Fantasy Mystic Quest 'Mystical Mist' Newcomer RJ remixes (Jonathan Lemethy & Richard Földhazi) provide our first FFMQ ReMix in a long while with a fun, staple-heavy dance/EDM arrangement that's easy to get into & solidly-constructed: "The game received middling reviews and sales in North America and Japan, citing its simplified gameplay and lack of depth in the game's story. 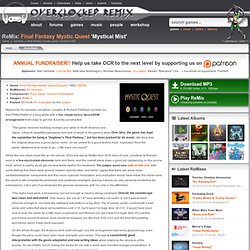 Over time, the game has kept the reputation for being a "beginner's Final Fantasy," but has been praised for its music. We think that the original deserves a good dance remix. So we aimed for a good techno track. Inspiration from the game. While this mix intros more like an old-school, 2002-era dance ReMix from OCR days of yore, Jonathan & Richard work in a few electro/dub elements here and there, and the overall piece does a good job capitalizing on the source hook, which is catchy as all get-out and lends itself to the treatment.

"The highs here were a bit piercing, but not enough to merit a strong complaint. Final Fantasy X 'Via' What started off as a formidable Tepid collab, with TO on beats, was further enhanced by pixietricks' vocals. 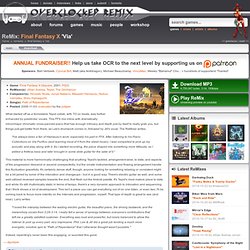 This FFX mix intros with dramatically minor/major chromatic cross-panned piano that has enough intricacy and depth just by itself to really grab you, but things just get better from there, as Lee's drumwork comes in, followed by Jill's vocal. The ReMixer writes: "I've always been a fan of Hamauzu's work, especially his part in FFX. After listening to his Piano Collections on Via Purifico (and learning most of it from the sheet music), I was compelled to pick up my acoustic and play along with it. As I started recording, the piece shaped into something more Mitsuda, so I added a fretless bass and later brought in some slide guitar for the sake of it.

" "I loved the interplay between the wailing electric guitar, the beautiful piano, the driving beatwork, and the melancholy vocals from 2:28-3:14. Mega Turrican 'Turrimann' And we're back.... with Mega Turrican!! 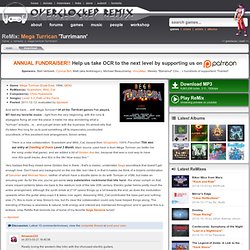 Of all the Turrican games I've played, MT had my favorite music - right from the very beginning, with the runs & arpeggios flying all over the place, it made me stop wondering what a "turrican" actually... is... and just get down with the business. It's almost silly that it's taken this long for us to post something off its impeccably-constructed soundtrack; of this excellent rock arrangement, Simon writes: "Here is a new collaboration. Scaredsim and Wild_Cat, bassist from Grospixels. 100% Frenchie! This was our entry at Dwelling of Duels Level 3 Month. Mega Man 2 'Rapid Fire' Extended dance techno goodness from Disco Dan in the form of Mega Man 2's Heat Man music. Mega Man 2 'Nuclear Flash' Final Fantasy VII 'Hydrophone Breakdown' "ReMixing has always motivated me to expand my musical palette. My goal for Hydrophone Breakdown was to delve into the soundscapes of more experimental bands like The Flaming Lips and The Most Serene Republic.

What I like about the original is its drawn-out structure, and interesting harmonic progressions. I tried to hold onto those elements while reinventing everything else. Producing this track also gave me a great chance to demo my Nord Electro Rack, which was responsible for the piano, rhodes, and B3 sounds. The drum programming was done in Fruity, as was the synth bass (with Osc3x). Humans + Gears: Xenogears ReMixed - An OverClocked ReMix Album.

Beatmania IIDX 7th Style 'Kick Your A. Our first Beatmania coverage comes courtesy of SGX, though apparently the original track by DJ Amuro also appears in DDR, yet was written specifically for these games and not a preexisting track as our standards stipulate. Introing with a nice orchestral landscape then quickly going dance industrial, there's a break towards the second minute where the short, staccato strings come back in and are eventually joined by ensemble legato strings and a delayed piano - then the beat comes BACK in and things really ring true to the title, with much A kicking going on. Nice rapid-fire filtering, but it's the psychotically quick piano that's just... all over the place... which sets things over the top. Batman 'Music of Funk. This was submitted by Mustin on behalf of Stephen Kennedy, who's the man behind the "Project Majestic Mix" thing over at KFSS studios (check the site link).

It's REALLY good, but Stephen nevertheless wants to emphasize that it's old and he could do a lot better now - how modest :) This is from the original BATMAN for NES, which had an excellent original soundtrack that was very complex, almost in a castlevania vein. Stephen has taken one of the leve themes and made it into techno, with some funk shouts going on big time, like 'party people' and 'move your feet to the beats' or something like that. Nevermind, the point is that it's really good, very kickin', and you should grab it as it's also our first Batman ReMix and many people have been requestin' this for a LOOOONNNNGGG while.

Somewhat. Personally, JJT's "Koopacalypse" and my own "One Flew Over the Koopa's Nest" and "Night on Koopa Mountain" were all much better options, but the burden of genius in this sad world of ours is watching others fail to recognize it... and pay the dire, dire consequences. While Mr. Aversa may not be the resident king of Christening his auditory output, let this reflect in no way upon its actual quality, which is as per usual quite high. Mega Man 2 'Tekno Wily. Metal Gear 'Snake Infiltrates. "Snake Infiltrates"...a cancelled adult film from the late 90s? Star Fox 'Clan McCloud. Good ole Starfox was polygon, before polygon was popular, and showed us 16-bit afficionados what the world had in store. Interestingly enough, few 3d shooters to succeed it, even with far better technology than the SuperFX chip, have been as deep, as fun, and as well-made as this puppy . . . the soundtrack was a classic, and really added a lot ot the game, but that stupid "dialogue" that consisted of one sample played at different speeds REALLY sucked . . . this is an ORCHESTRAL mix, with an extended intro, that borrows from the main theme as well as the first stage theme . . . enjoy!