With Interest rates at an all time low its becoming increasingly hard to get a good return on your money with the banks. We can show you how thousands of Australians achieve financial independence and success.

Labor Launches Brisbane Light Rail Plan. Imagining the Gold Coast of the Future. The Coomera – Pimpama Area Is Booming in Gold Coast, Australia. Pimpama – Coomera located at the northern end of the Gold Coast is experiencing prolific growth with over 68.5 Billion in major infrastructure projects driving the region ahead. 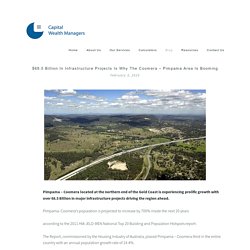 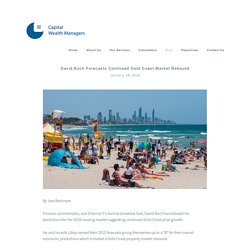 He and his wife Libby ranked their 2015 forecasts giving themselves up to a "B" for their overall economic predictions which included a Gold Coast property market rebound. David or 'Kochie' had been highly critical of the Gold Coast in recent years, advising property investors to avoid the "catastrophic" Queensland coast in early 2012. He was back in mid-2013 with further criticism of Gold Coast investment. A slower population growth and a tightening of lending criteria for investors will offset low interest rates in 2016 across the country. Why Buyers are off to Regional Australia: Terry Ryder. People moving to live and work in Australia naturally gravitate to the big cities such as Sydney and Melbourne, but research suggests regional parts of the country are becoming more popular. 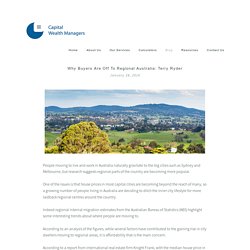 One of the issues is that house prices in most capital cities are becoming beyond the reach of many, so a growing number of people living in Australia are deciding to ditch the inner city lifestyle for more laidback regional centres around the country. Indeed regional internal migration estimates from the Australian Bureau of Statistics (ABS) highlight some interesting trends about where people are moving to. According to an analysis of the figures, while several factors have contributed to the gaining rise in city dwellers moving to regional areas, it is affordability that is the main concern. Over the five years to June 2014, the latest available data shows that an average of almost 15,000 people net per annum left Australia’s capital cities for regional areas. Reasons to move your Super into the property market — Capital Wealth Managers.

The end of an era for Aussie blue chip shares By Ryan Newman Investors have already been thrown their fair share of curveballs in 2016. 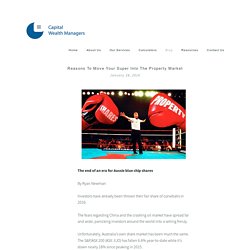 The fears regarding China and the crashing oil market have spread far and wide, panicking investors around the world into a selling frenzy. Unfortunately, Australia’s own share market has been much the same. The S&P/ASX 200 (ASX: XJO) has fallen 6.6% year-to-date while it’s down nearly 18% since peaking in 2015. In times of uncertainty, investors have typically turned to the blue chips as a source of comfort. But it hasn’t gone that way so far in 2016… Sure, the miners and energy companies have been hit hard, as one might expect. Investors are also weighing up the likelihood that the miner will be forced to scrap its ‘progressive dividend’ policy, while a major capital raising is possible.

Capital Wealth Managers at Bundall, QLD. Younger Women Flock to DIY Super. "What these numbers show is that people are taking the opportunity to set up an SMSF during the years they are still earning and becoming more engaged in building their wealth," Slattery says. 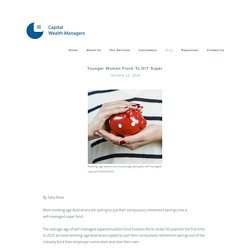 "It's a trend that should be encouraged, as people are setting out earlier in their working lives to ensure they are self-sufficient in retirement, which is the prime goal of our compulsory superannuation system. " Working-age women are increasingly represented among SMSF trustees, a cohort traditionally dominated by men in retirement. Women now represent 66 per cent of SMSF owners aged between 35 and 64. Many of these women have a joint SMSF with their male partner, but a growing number are going it alone. Most financial planners see the increasing popularity of SMSFs, among men and women, as a positive sign, but some caution people against falling into the trap of establishing an SMSF as a status symbol. "Good financial advice is important, but it is not enough to trust your adviser. 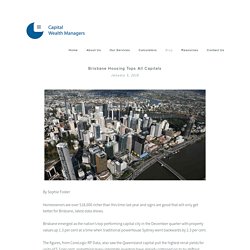 Brisbane emerged as the nation’s top performing capital city in the December quarter with property values up 1.3 per cent at a time when traditional powerhouse Sydney went backwards by 2.3 per cent. The figures, from CoreLogic RP Data, also saw the Queensland capital pull the highest renal yields for units of 5.3 per cent, something many interstate investors have already cottoned on to by shifting their funds here.