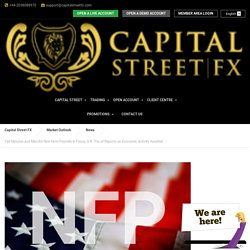 At the close on NYSE, the Dow Jones Industrial Average lost 0.31% at 20,663, the S&P 500 dropped 0.23% and the Nasdaq Composite inched 0.04% lower at 5911.74. The Dow suffered its first monthly decrease since October but all three major indices posted quarterly gains of at least 4.6%. Stock markets were spurred by expectations that President Donald Trump will fulfill his pledges including tax reform, deregulation and infrastructure spending. The U.S. dollar ended flat versus a basket of six major currencies on the back of dovish remarks from a Federal Reserve official. The U.S. dollar index, which measures the greenback’s strength against a trade-weighted basket of six rivals, was almost unchanged at 100.22 late Friday and recorded a rise of 0.78% for the week – the first weekly advance after three weeks of losses. 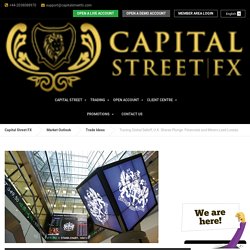 The FTSE 100 index lost more than 0.7%, driven lower by losses in banking sector and mining companies. Financials topped the list of biggest decliners after Trump’s failure at his health-care bill mounted concerns over the possibility of his tax reform and other policies to boost the largest economy in the world. Particularly, shares of Lloyds Banking Group shed 1.93% while those of Barclays and HSBC Holdings PLC dropped 2.4% and 0.71%, respectively. Sterling Slumps Versus Dollar on Mounting Political Uncertainties - Capital Street. British Pound nose-dived to the lowest level since last Friday against the dollar amidst rising uncertainties concerning the U.K. politic developments while economic data showed U.S. consumer confidence surged to a more than 16-year high in March. 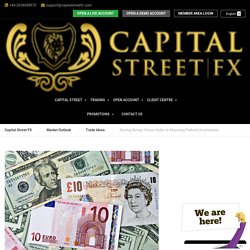 The pound retreated on Tuesday ahead of a highly-anticipated move by the Prime Minister Theresa May on Wednesday. The U.K. PM is expected to invoke Article 50 to start the Brexit process tomorrow by send a letter to Donald Tusk, President of the European Council, notifying him that Britain is leaving the European Union. U.S. Shares Inch Higher Ahead of Health-care Bill Vote, Boosted by Upbeat Durable Goods Orders. U.S. shares rose on Friday with all three stock benchmarks advancing as investors were awaiting a vote on a closely watched health-care bill while new orders for durable goods climbed faster than expected. 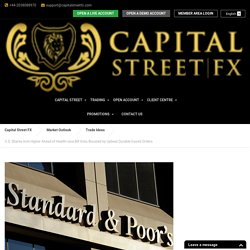 The S&P 500 index added 0.36% with seven out of 11 sectors making up the benchmark trading higher. While information technology stocks were leading the gains, up 0.6%, shares of companies in materials and consumer Staples lost 0.13% each. Gold Hits Three-week Highs As Dollar Broadly Lower Versus Rivals - Capital Street FX. Gold surged to a nearly three-week high on Tuesday as the greenback dropped to a six-week low against a basket of currencies. 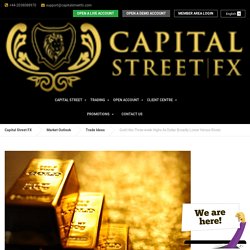 The dollar extended its downward rally from last week following U.S. Federal Reserve’s comments that disappointed dollar wagers. The dollar index, which measures the greenback against a basket of six major currencies, lost nearly 0.6 percent at 99.77. USDCAD Tumbles to Two-week Lows as Oil Edges Higher While Dollar Hit By Fed. Canadian dollar soared to the highest level in more than two weeks versus its American counterpart on Thursday, supported by a rising crude price while the dollar lost ground after Fed raised rate but signaled no pick-up in the pace of tightening. 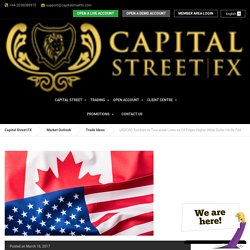 The pair USDCAD dropped to as low as 1.32800 as the dollar weakened broadly against most of its peers even after the Federal Reserve hiked interest rates by 25 basis points to a range of 0.75 percent to 1.00 percent. This was the second rate hike in three months, a move supported by steady economic growth, strong job gains and prospect that inflation is heading towards the central bank’s target goal. However, Fed did not signal any plan to accelerate the pace of monetary tightening with Fed Chair Janet Yellen emphasizing that future rate increases would be “gradual.” Trade suggestion Sell Stop at 1.32800, Take profit 1.32200, Stop loss at 1.33100.

Crude Oil Extends Downward Rally As OPEC Revises Up Forecasts for International Output. Crude prices hit the lowest level since November 30, 2016 after a monthly report from the Organization of the Petroleum Exporting Countries pointed to an increase in crude inventories of developed countries. 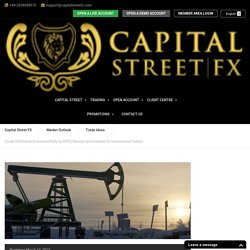 Brent crude fell to as low as $50.40 per barrel – the level not seen in three-and-a-half month as OPEC said in its monthly report that oil inventories in developed countries had risen above the five-year average to stand 278 million barrels in January regardless of efforts by major producers to curb crude output. The report also revised up its forecast for production outside OPEC by 400,000 bpd, 160,000 more than previously expected. The comeback of U.S. shale drilling is also anticipated to push U.S. output higher by 100,000 bpd in 2017. Pound Hits Two-month Lows, U.K. Shares Gap Up - Capital Street FX. U.K. shares gapped up on Tuesday, spurred by a weakening British Pound after Britain’s parliament’s decision to pass legislation allowing the government to invoke Article 50 of the Lisbon Treaty. 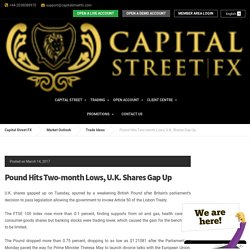 The FTSE 100 index rose more than 0.1 percent, finding supports from oil and gas, health care and consumer-goods shares but banking stocks were trading lower, which caused the gain for the benchmark to be limited. The Pound dropped more than 0.75 percent, dropping to as low as $1.21081 after the Parliament on Monday paved the way for Prime Minister Theresa May to launch divorce talks with the European Union. According to market sources, May is preparing to trigger Brexit in the last week of March. U.S. Producers Ramp Up Shale Production, Oil Plunges to Three-month Lows. U.S. crude prices fluctuated on Friday, struggling to find direction after having fallen below $50 per barrel on the day before as concerns over a global glut overshadowed bullish sentiment from output cuts by major exporters. 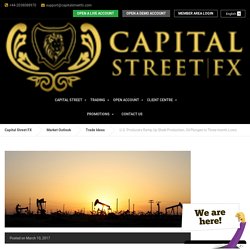 West Texas Immediate was flat in early European trade, on track for 7 percent decline this week – the biggest weekly drop since early November. The prices have been under pressure from rising production in the U.S. where producers are drilling more wells and pumping more oil on the back of rising oil prices. Pound Plunges to Seven-week Low Ahead Britain's Parliament Vote. British Pound slumped to a seven-week low against the dollar on Tuesday as a strengthening dollar pushed the pair lower ahead of a second vote in Britain’s upper house of parliament which may give parliamentarians a greater say over the terms of Britain’s exit from the EU. 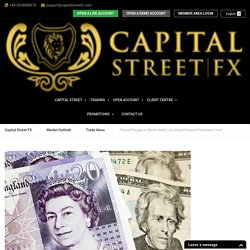 The pound dropped more than 3% to trade below $1.2200 – the lowest level since mid-January. Prime Minister Theresa May is to trigger the Article 50 EU exit mechanism later this month and her peers in the chamber will vote in an attempt to require the government to give Parliament a “meaningful vote” on the eventual deal with the bloc. Meanwhile, the dollar has been on a rise versus most of its rivals due to rising expectations for a rise in U.S. interest rates this month. Trade suggestion.