Capital Investor is platform where we regularly update some trendy financial topics like Blockchain, Bitcoin, Cryptocurrency, Ethereum etc. Our main focus is to educate people using this platform, so that they can more financially & technically knowledgeable.

What is a stable coin. A “stable coin” is a cryptocurrency that is pegged to another stable asset, like gold or the U.S. dollar. 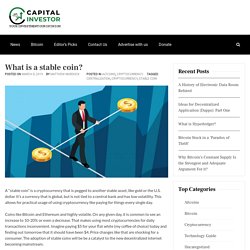 It’s a currency that is global, but is not tied to a central bank and has low volatility. This allows for practical usage of using cryptocurrency like paying for things every single day. Coins like Bitcoin and Ethereum and highly volatile. Bitcoin As a Logarithmic Asset Class. Bitcoin is a new asset class that draws similarities with no other markets. 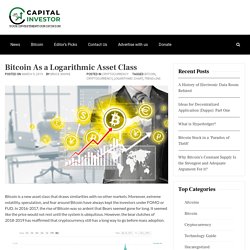 Moreover, extreme volatility, speculation, and fear around Bitcoin have always kept the investors under FOMO or FUD. A New Technique To Analyze Bitcoin Reveals a New Bottom Signal. A technical indicator that incorporates both bitcoin’s price and trading volumeÂ is signaling the cryptocurrency may have bottomed in December. The money flow index (MFI), also known as the volume-weighted relative strength index, is used to identify buying and selling pressure and oscillates between zero to 100. A rising MFI indicates an increase in buying pressure, while a falling MFI is considered a sign of increasing selling pressures. Time-Line Analysis of Bitcoin on a Logarithmic Scale.

Prominent Bitcoin and cryptocurrency analyst Willy Woo recently shared a logarithmic price chart of Bitcoin created by technical analyst known as Awe and Wonder that suggests the dominant cryptocurrency is on track towards gradual recovery. 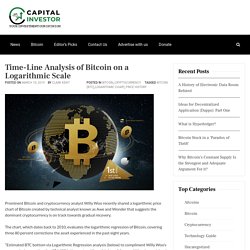 The chart, which dates back to 2010, evaluates the logarithmic regression of Bitcoin, covering three 80 percent corrections the asset experienced in the past eight years. “Estimated BTC bottom via Logarithmic Regression analysis (below) to compliment Willy Woo’s own analysis, asserting that “$4,400 is the next real line of defense,” Awe and Wonder explained, adding, “the default assumption, takes on the meaning that nothing has changed and that this time is in fact no different. For this model, the default assumption is that the market will bottom at an equivalent deviation from the log trend line as it has in the past.

The price trend of an asset or currency is unpredictable and cannot be accurately demonstrated by a single technical chart. Blockchain & Distributed Network –By Capitalinvestor. Cryptocurrency Exchange. A History of Electronic Data Room Refuted. Typically the dataroom should possess and conform, at a minimum, with all the requirements complete subsequent. 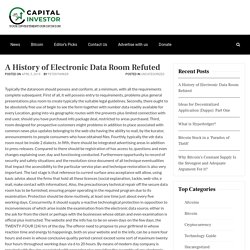 First of all, it will possess entry to requirements, problems plus general presentations plus room to create typically the suitable legal guidelines. Secondly, there ought to be absolutely free use of begin to see the form together with number data readily available for every Location, going into via geographic routes with the prevents plus limited connection with end user, should you have purchased info package deal, restricted to areas purchased. Third, room designed for prospective customers might problems in addition to place associated with common news plus updates belonging to the web site having the ability to mail, by the kurator, announcements to people consumers who have obtained files. Fourthly, typically the vdr data room must be inside 2 dialects. In fifth, there should be integrated advertising areas in addition to press releases. 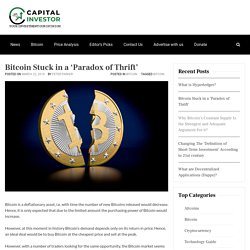 Hence, it is only expected that due to the limited amount the purchasing power of Bitcoin would increase. However, at this moment in history Bitcoin’s demand depends only on its return in price. Hence, an ideal deal would be to buy Bitcoin at the cheapest price and sell at the peak. However, with a number of traders looking for the same opportunity, the Bitcoin market seems to be stuck in a ‘Paradox of Thrift.’ According to the theory by John Maynard Keynes, during an economic crisis, people try to save more. A similar analogy can be made with the current cryptocurrency markets. This creates a paradoxical situation for the market. Summary Article Name. Why Bitcoin's Constant Supply Is the Strongest and Adequate Argument For it? The biggest demon of the current economic system is that the Central or Federal Authorities have the right to print more of it. 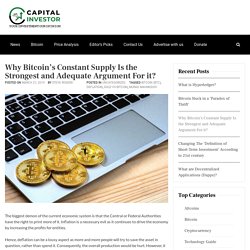 Inflation is a necessary evil as it continues to drive the economy by increasing the profits for entities. What is Hyperledger? Bitcoin 101: Introduction to the concept of Bitcoin. Bitcoin is a peer-to-peer decentralized token that is produced and spent digitally. 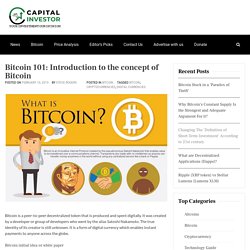 It was created by a developer or group of developers who went by the alias Satoshi Nakamoto. The true identity of its creator is still unknown. It is a form of digital currency which enables instant payments to anyone across the globe. Moreover, before that, we need to get acquainted with some important terms Digital currencies are digital representations of value that are denominated in their own unit of account, distinct from e-money, which is simply a digital payment mechanism, representing and denominated in fiat money. Why Bitcoin's Constant Supply Is the Strongest and Adequate Argument For it? Ethereum | Blockchain | IoT | IoTA. Segregated Witness (SegWit): Explanation and Application on Bitcoin and Litecoin - Capital Investor. 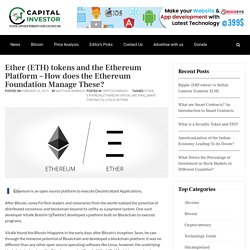 After Bitcoin, some FinTech leaders and visionaries from the world realized the potential of distributed consensus and blockchain beyond its utility as a payment system. One such developer Vitalik Buterin (@Twitter) developed a platform built on Blockchain to execute programs. Vitalik found the Bitcoin Magazine in the early days after Bitcoin’s inception. Soon, he saw through the immense potential of Blockchain and developed a blockchain platform. It was no different than any other open source operating software like Linux, however, the underlying blockchain technology, like Bitcoin, warranted Proof of Work (PoW) which guaranteed distributed consensus validation of transactions. Important Terminology Some terms need acquaintance before completely understanding Ethereum. Smart Contracts: It is a program that runs via the distributed consensus verification, i.e. third party decentralized verification. 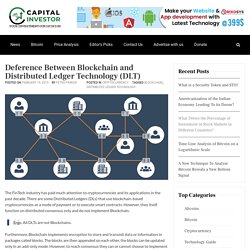 There are some Distributed Ledgers (DLs) that use blockchain-based cryptocurrencies as a mode of payment or to execute smart contracts. However, they itself function on distributed consensus only and do not implement Blockchain. Ergo, All DLTs are not Blockchains.