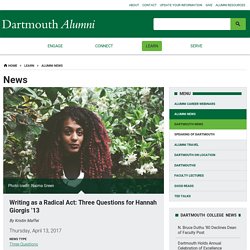 Her work has been featured in The New Yorker, The New York Times, and The Guardian, as well as online at BuzzFeed, The Toast, and Jezebel. She’s been lauded for her “witty yet unapologetic commentary on race relations in the U.S.,” as well as her ability inspire her readers to tackle and understand difficult issues. While at Dartmouth, she majored in English, modified with African and African American Studies (AAAS). She lives in New York. Visit Giorgis’ website to learn more about her and read some of her work. How did Dartmouth help you become a writer? I'd always loved reading and writing, but AAAS classes like Professor Soyica Colbert's courses on black literature or Professor George Trumbull's Africa and the World challenged me to elevate both the content and style of my writing. My writing process definitely changes based on subject matter, timing, mood, weather–you name it. Full Service Integrated Advertising Agency. You probably know a little bit about Wieden+Kennedy. 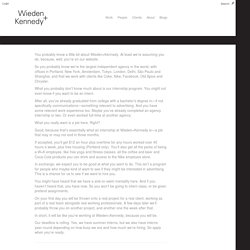 At least we’re assuming you do, because, well, you’re on our website. So you probably know we’re the largest independent agency in the world, with offices in Portland, New York, Amsterdam, Tokyo, London, Delhi, São Paulo and Shanghai, and that we work with clients like Coke, Nike, Facebook, Old Spice and Chrysler. What you probably don’t know much about is our internship program. You might not even know if you want to be an intern. After all, you’ve already graduated from college with a bachelor’s degree in—if not specifically communications—something relevant to advertising. What you really want is a job here.

Good, because that’s essentially what an internship at Wieden+Kennedy is—a job that may or may not end in three months. If accepted, you’ll get $12 an hour plus overtime for any hours worked over 40 hours a week, plus free housing (Portland only). In exchange, we expect you to be good at what you want to do. Portland. WK.com. Wieden and kennedy. YoYo Games. How to Become a Video Game Script Writer. How to Become a Video Game Script Writer Have you ever had a great idea for a game along with a killer story to back it up? 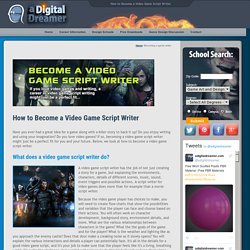 You should also be creative. Get some training In Summary. Developer Advice. YoYo Games. Stencylpedia - Crash Courses. A Brief Introduction to Stencyl Introduces you to the various parts of the Stencyl workflow. 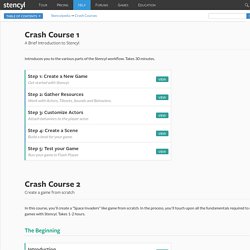