Good Friday In Jerusalem. A Journey of Joy - Christian Pilgrims in Israel. Jerusalem is a spiritual centre - Jerusalem - InfoHostels.com. They say, all you need is to believe in something of someone, and here it is the holiest city in the world, Jerusalem, where three different religious live and breathe next to each other, Christians would quietly pray in the Church of the Holy Sepulchre,Muslims will have their Al-Aqsa Mosque and the Jews would just dance it away next to the Western Wall...That's how diverse and unite actually this city is... 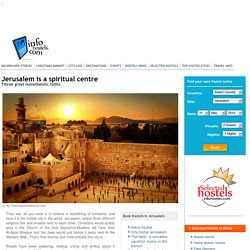 People have been exploring, visiting, crying and writing about it forever, about its 3000 year history, its secrets and believe, with three greatest faiths living in it for centuries, Judaism, Christianity and Islam, so imagine how strong it actually is! Even if you are an average tourist not looking for anything special, not believing in anyone but yourself, it's still hard to be in this city and not to be swept up in the emotional tide. 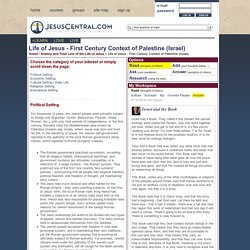 They called it the Tenakh¨the sacred writings were called the Tenakh. Say that word together out loud. When you get to the end of it, it's like you're clearing your throat. It's from three letters: T is for Torah; N is the Hebrew word for the prophets Nedi'im; K is for their word for writings Ketugim. They had a Book that was unlike any other book that had existed before, because it contained truths and ideas that had never hit the world before. This Book, unlike any of the other mythologies or religions of the peoples around Israel, said that human existence is not just an endless cycle of repetition over and over and over again, but that it is a story. This Book said that it is God's story, and that the story had a beginning - that God said: Let there be light and there was - that it had a middle - there was a fall and God has begun this work of redemption¨and that one day it will reach a climax.

This Book said that this God created human beings in His own image. Palestine in the Time of Jesus. THE WORLD OF JESUS' TIME Life in Galilee. Jesus was a Palestinian Jew. 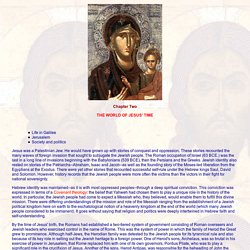 He would have grown up with stories of conquest and oppression. These stories recounted the many waves of foreign invasion that sought to subjugate the Jewish people. The Roman occupation of Israel (63 BCE.) was the last in a long line of invasions beginning with the Babylonians (539 BCE), then the Persians and the Greeks. Jewish identity also rested on stories of the Patriarchs--Abraham, Isaac and Jacob--as well as the founding story of the Moses-led liberation from the Egyptians at the Exodus.

There were yet other stories that recounted successful self-rule under the Hebrew kings Saul, David and Solomon. Going on a pilgrimage « See The Holy Land. A long and respected history Thrice-yearly obligation for Jews Journeys involved hardship Travel guide printed in 1515 Millions of Muslims go to Mecca Preparation is necessary Christians have different interests The desire to be a pilgrim is deeply rooted in human nature. 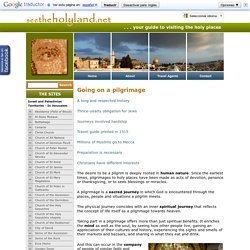 A pilgrimage is a sacred journey in which God is encountered through the places, people and situations a pilgrim meets. The physical journey coincides with an inner spiritual journey that reflects the concept of life itself as a pilgrimage towards heaven. Taking part in a pilgrimage offers more than just spiritual benefits. Going on a pilgrimage « See The Holy Land.

Jerusalem Facts. Jerusalem. Christian Israel Tours for individuals and groups of all sizes, Protestant, Evangelical: Trips : Tourism : Pilgrim Tours. Selected Sites in Jerusalem. The Mount of Olives is a sacred place for both Jews and Christians. 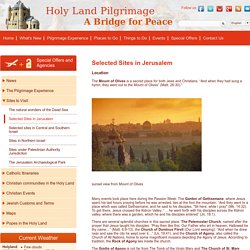 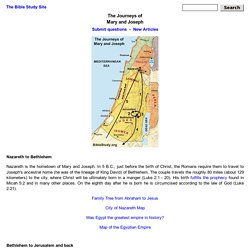 In 5 B.C., just before the birth of Christ, the Romans require them to travel to Joseph's ancestral home (he was of the lineage of King David) of Bethlehem. The couple travels the roughly 80 miles (about 129 kilometers) to the city, where Christ will be ultimately born in a manger (Luke 2:1 - 20). His birth fulfills the prophecy found in Micah 5:2 and in many other places. On the eighth day after he is born he is circumcised according to the law of God (Luke 2:21). Bethlehem to Jerusalem and back Forty days after Jesus is born, fulfilling the purification requirement of Leviticus 12, Mary and family travel to Jerusalem's temple to present him before God. Bethlehem to Egypt. Map of Israel in the Time of Jesus Christ with Roads. Map of Israel in the Time of Jesus (Enlarge) (PDF for Print) (Freely Distributed) Map of First Century Israel with Roads Political map of Israel during New Testament times, when Pontius Pilate was procurator of Judea and Herod was Tetrarch of Galilee (Luke 3:1). 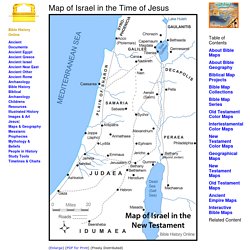 The primary locations mentioned in the New Testament are listed; the roads are also listed on the map, although many roads were not always safe to travel.